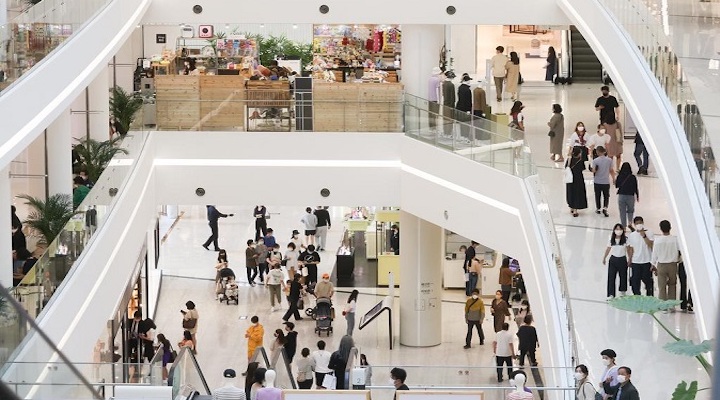 The combined sales of 25 major offline and online retailers came to 14.21 trillion won (US$9.98 billion) last month, compared with 13.2 trillion won a year earlier, according to the data compiled by the Ministry of Trade, Industry and Energy.

It marked the seventh consecutive month of on-year rise, though the growth slowed down from the previous month’s on-year growth of 15.4 per cent.

Sales from offline stores rose 6 per cent in September on solid demand for luxury goods, fashion items and sporting goods.

Of the offline stores, department stores saw their sales advance 8.5 per cent and sales of convenience stores went up 10.6 per cent in September.

But sales at discount chain stores, such as E-mart and Lotte Mart, inched down 0.3 per cent on-year on dwindling demand for everyday items and home appliances. Smaller supermarkets also saw their sales inch down 0.1 per cent on-year, the data showed.

Sales from online platforms jumped 9.1 per cent from a year earlier last month to come to 6.67 trillion won over the continued spread of the contactless shopping trend amid the prolonged pandemic.

Among categories, tourism and other services saw their sales jump 30.8 per cent as restrictions for international travellers over the Covid-19 pandemic have further eased.

Those of cosmetics and foodstuffs via online platforms also rose 12.5 per cent and 9.2 per cent, respectively, the data showed.

Online platforms accounted for 46.9 per cent of the total sales in September, up from 46.2 per cent a year ago, according to the ministry.

The story was originally published on The Korea Bizwire.