An ancient fresco is among 60 treasures the U.S. is returning to Italy 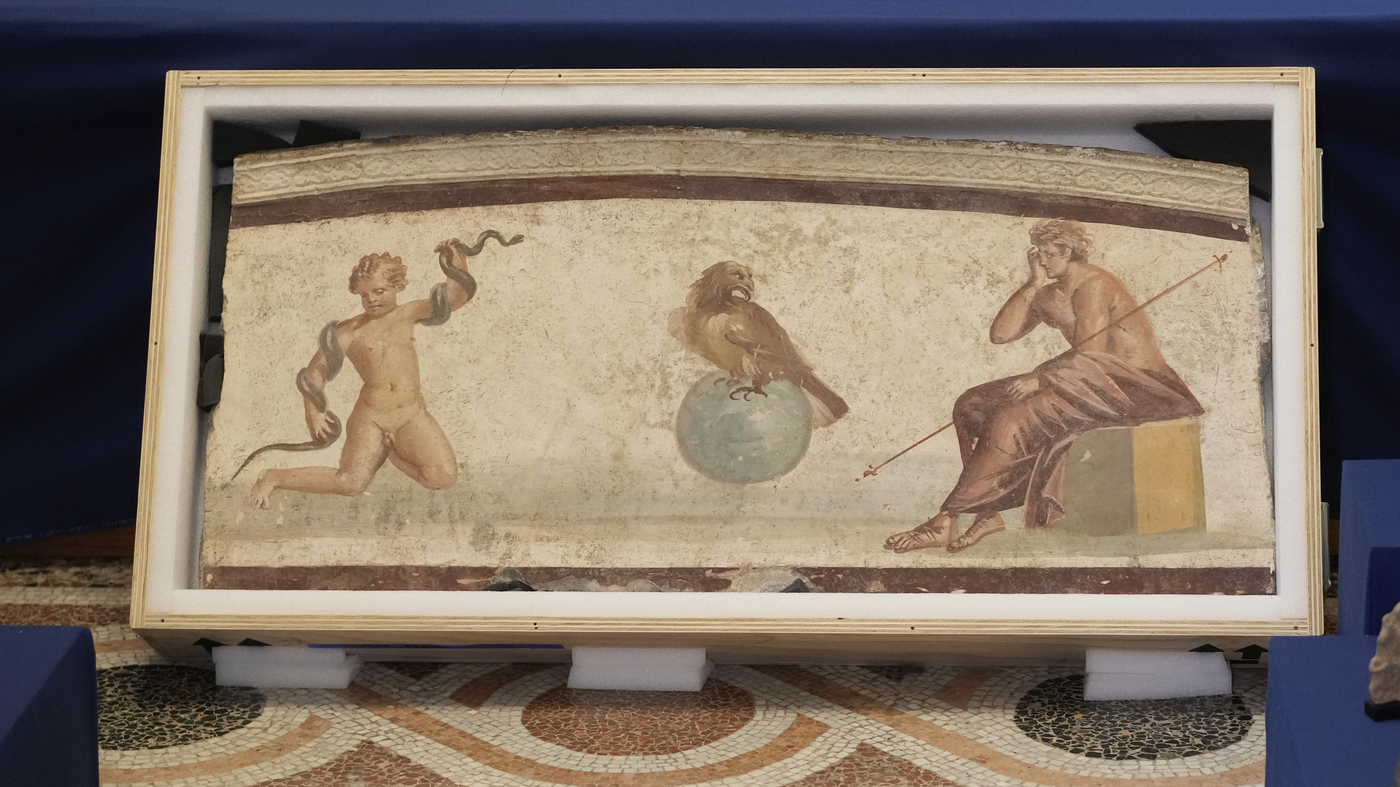 A Pompeiian style fresco from Herculaneum titled “Young Hercules and the snake”, dated to the I second A.C., is seen on display among other archaeological artifacts stolen from Italy and sold in the U.S. by international art traffickers, during a press conference in Rome, Monday, Jan. 23, 2023. Andrew Medichini/AP hide caption

A Pompeiian style fresco from Herculaneum titled “Young Hercules and the snake”, dated to the I second A.C., is seen on display among other archaeological artifacts stolen from Italy and sold in the U.S. by international art traffickers, during a press conference in Rome, Monday, Jan. 23, 2023.

ROME — A fresco depicting Hercules and originally from Herculaneum, a city destroyed along with Pompeii by the 79 A.D. eruption of Mount Vesuvius, was back in Italy Monday, along with 59 other ancient pieces illegally trafficked to the United States.

Last summer, U.S. authorities announced that the fresco and dozens of other trafficked objects, which ended up in private collections in the United States, would go back to Italy.

Among the more precious pieces Italian and U.S. officials displayed to journalists in Rome is a B.C. kylix, or shallow two-handled drinking vessel, some 2,600 years old. Also returned is a sculpted marble head, from the 2nd century B.C., depicting the goddess Athena.

Italy said the returned works are worth more than $20 million (18 million euros) overall.

The fresco, done in the classic style of Pompeiian art, depicts Hercules as a child strangling a snake.

The returned pieces had been sold by art dealers, ended up in private U.S. collections and lacked documentation to prove they could be legally brought abroad from Italy.

Under a 1909 Italian law, archaeological objects excavated in Italy cannot leave the country without permission unless they were taken abroad before the law was made.

Among those at Monday’s presentation was Manhattan Assistant District Attorney Matthew Bogdanos, chief of that office’s unit combatting illicit trafficking in antiquities. On this investigation, his office worked jointly with a specialized art squad branch of Italy’s paramilitary Carabinieri.

“For Italian antiquities alone we have executed 75 raids, recovered more than 500 priceless treasures valued at more than $55 million,” Bogdanos said.

Italy has been a pioneer in retrieving illegally exported antiquities from museums and private collections abroad.

The country has been so successful in recovering such ancient artworks and artifacts that it created a museum for them. The Museum of Rescued Art was inaugurated in June in a cavernous structure that is part of Rome’s ancient Baths of Diocletian.

Italian cultural authorities are deciding whether to assign the latest returned pieces to museums near to where they were believed to have been excavated. Culture Minister Gennaro Sangiuliano told reporters that another possibility is having a special exhibition of the returned pieces.

It’s not only Italy that loses pieces of its own history when artifacts are discovered in clandestine excavations and smuggled off to art dealers for profitable sales. Academic experts, deprived of valuable information about the context of the area where the objects were originally found, lose out on knowledge about past civilizations.

Israel clears a hurdle for visa-free U.S. travel — but there are strings attached

A bus crashed, fell off a bridge and caught fire in Pakistan, killing 40