A losing GOP candidate in N.M. is charged over shootings at homes of Democrats 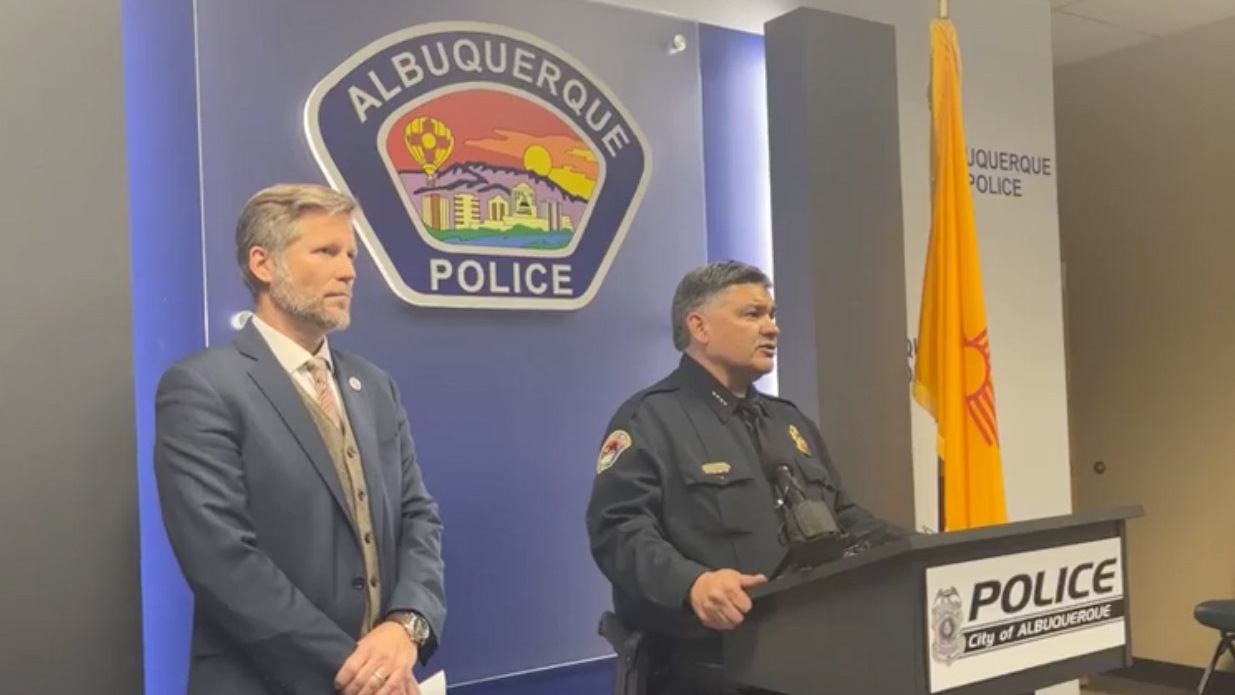 “We’re worried and concerned that these are connected and possibly politically motivated or personally motivated,” Albuquerque Mayor Tim Keller, left, said earlier this month of a string of shootings. He’s seen here alongside Police Chief Harold Medina during a press conference via the Albuquerque Police Department’s Facebook livestream. Screenshot by NPR hide caption

“We’re worried and concerned that these are connected and possibly politically motivated or personally motivated,” Albuquerque Mayor Tim Keller, left, said earlier this month of a string of shootings. He’s seen here alongside Police Chief Harold Medina during a press conference via the Albuquerque Police Department’s Facebook livestream.

Solomon Peña, who ran for a state House seat in New Mexico as a Republican last November, was arrested Monday in Albuquerque for allegedly paying four men to shoot at the homes and businesses of four elected officials in the area, police said.

Booking records from the Albuquerque Metropolitan Detention Center list several counts, including conspiracy to commit a felony, shooting at dwellings or occupied buildings, and shooting from a vehicle.

Peña, 39, allegedly hired the men to carry out the shootings of the elected officials, all Democrats, and gave out the politicians’ addresses over the phone. Police also have surveillance footage and witnesses, according to Albuquerque Police Chief Harold Medina.

“APD essentially discovered what we had all feared, and what we had suspected, that these shootings were indeed politically motivated, and that has basically been confirmed by this investigation,” Albuquerque Mayor Tim Keller, a Democrat, said.

Barboa said she came home from Christmas shopping and saw her home had been shot.

“My house had four shots through the front door and windows, where just hours before my grandbaby and I were playing in the living room,” she said in a statement. “Processing this attack is heavy, especially knowing that other women of color elected officials have also been targeted.”

Police said nobody was injured in any of the shootings.

During the Jan. 5 shooting, Peña allegedly went with the gunman to Maesta’s office and fired one of the weapons, said Albuquerque Police Deputy Commander Kyle Hartsock.

About 40 minutes after that shooting, a car thought to be involved was pulled over and police recovered two guns.

“I hope, personally, too, our legislators can breathe a sigh of relief,” Keller said. “They can go back to focusing on the legislative session. I also know that fundamentally, at the end of the day, this was about a right-wing radical, an election denier who was arrested today, and someone who did the worst imaginable thing you can do when you have a political disagreement, which is turn that to violence.”

Pena ran for the District 14 seat of the New Mexico House of Representatives as the Republican nominee but lost in the general election to Democrat Miguel Garcia, who received 73.6% of the vote.

Peña is a supporter of former president Donald Trump, and upon Trump’s announcement that he would be running for reelection in 2024, Peña tweeted, “I stand with him. I never conceded my HD 14 race. Now researching my options.”

Europe is set to ban Russian oil products, the latest strike on the Kremlin war chest