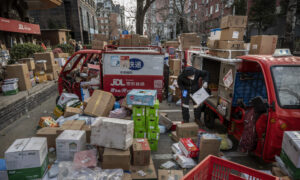 The more the GSCPI value deviates positively from the multi-year average, the greater the pressure on the global supply chain.

According to the report, in the past, when supply chain conditions in China tightened, the rest of the world’s supply chain also tightened. Over the past three years of the pandemic, the GSCPI standard deviation reached a positive peak of 4.3 at the end of 2021 and then dropped sharply; in March 2022, the GSCPI standard deviation dropped to a positive 2.8 but rose again in April due to the impact of China’s “zero-COVID” policy and the Russia–Ukraine war.

The report aims to examine the impact of China’s response to the current outbreak on the global supply chain. It notes a novel development in recent months: namely, that conditions in China are apparently impacting global supply conditions less than in the past. It suggests that this could be attributed to higher herd immunization rates in developed countries as well as less restrictive pandemic control measures.

However, the analysis points out, China’s National Bureau of Statistics publishes its own, alternative PMI index, which shows “a very large worsening of supplier delivery times.” The discrepancy between the two indices “raises an important watchpoint” for China’s impact on the global supply chain in the coming months.

Of the five sub-indices of China’s manufacturing PMI, its seasonally adjusted Supplier Delivery Time Index showed the longest period of decline, starting in July of 2022 and continuing for six months. It fell below the critical point of 50 percent in August, dropped further to 46.7 percent in November, and then plunged 6.6 percent to 40.1 percent in December. December’s number was 20 percent lower than July’s.

These indicators all point to lengthening delivery times for suppliers of raw materials to the manufacturing industry.

The official explanation from the CCP was that a shortage of logistics and transportation manpower caused by the pandemic resulted in longer delivery times.

Since early December, when the Chinese regime suddenly reversed its pandemic policies, China has been crippled by an outbreak of COVID-19 that has nearly collapsed hospitals and funeral homes.

The pandemic has left many workers unable to go to work. For example, according to the official website of Cixi, an industrial center in eastern China’s Zhejiang Province, on Jan. 6 only 30 percent of the employees at a large tech company in the city were able to go to work, while 70 percent were unable to work because of COVID-19. The company said that it will strive to resume full production capacity by the end of February.

Australia’s Treasury Minister Jim Chalmers said in an interview with Sydney’s 2GB radio station on Jan. 3 that China’s current pandemic policy will affect Australia and its supply chain. Chalmers listed China as one of the top five factors that will affect Australia’s economic situation in 2023, along with the United States, the UK, the EU, and the Russia–Ukraine war.

On the issue of adjusting Australia’s supply chain, Chalmers said Australia has made a good start on making its supply chain more flexible, but it will not happen overnight. Dr. Richard Dennis, economist and executive director of The Australian Institute, told the ABC (Australia) that as the global supply chain is threatened by the worsening pandemic in China, it is foreseeable that Australia will experience a supply chain shortfall.

Current affairs commentator Ma Xianghong told The Epoch Times on Jan. 9: “Australia’s dependence on the Chinese economy makes it difficult to sustain a loss or disruption in the supply chain. Still, if the Australian government can resolve to break away from that dependence and gradually diversify supply from the Chinese market, it will benefit the country and the people in the long run.”

Ma further explained: “On the surface, the losses will be greater in China than in Australia. China is not as strong as it seems—the regime is unstable, the food crisis, the unpredictable policies, and so on. So with the world moving away from the Chinese economy and creating new supply chains or building their own, it should not be difficult for Australia to source supplies from other countries.”

However, David Bassanese, chief economist at Australian company BetaShares, told The Australian on Jan. 5 that Australia could face a shortage of chemicals and machinery but is likely to avoid a widespread supply chain disruption caused by the Chinese pandemic. According to Bassanese, it is an overreaction to say that the Chinese pandemic will lead to shortages of some of Australia’s key commodities, as the imports that could be affected are a relatively small part of the Australian economy.

The new export order index for Chinese manufacturing fell to 41.6 percent in April 2022, its lowest number since June 2020; it subsequently rebounded but fell again to 44.2 percent at the end of the year, reaching its second lowest level since June 2020.

According to Ma: “China’s foreign trade exports have fallen, mainly due to the difficulty in delivering domestic orders on time and the shift of international orders to Southeast Asia, which has had a greater impact on Chinese exporters. At the same time, the return of the U.S.-led manufacturing industry has led to a structural decline in China’s exports to the United States, and as countries come to see what the CCP is doing, mutual trust is becoming difficult to repair, which will affect the global supply chain.”

Jeffrey Gundlach, founder of the U.S. investment firm DoubleLine Capital, told Nikkei Asia in a recent interview that post-pandemic, the “new normal” will include an increase of nationalism among the world’s economies. Although the trend has been to rely on China for cheap imports, that reliance may change.

In mid-November of 2022, Nikkei Asia surveyed 100 major Japanese manufacturing companies about the Chinese supply chain, receiving responses from 79 companies. Among them, 78 percent believed that the risk of sourcing parts and components from China had increased over the prior six months. Fifty-three percent said they would reduce their sourcing from China, with the main candidates to replace China’s industrial chain being Japan, Thailand, and Vietnam.

Kenneth Rogoff, a former chief economist at the International Monetary Fund (IMF) and professor at Harvard University, said in a recent interview with Nikkei Asia, “China’s role will decline, and the influence of other Asian countries such as Indonesia, South Korea, and Japan will increase.”

Kathleen Li has contributed to The Epoch Times since 2009 and focuses on China-related topics. She is an engineer, chartered in civil and structural engineering in Australia.

Ellen Wan has worked for the Japanese edition of The Epoch Times since 2007.