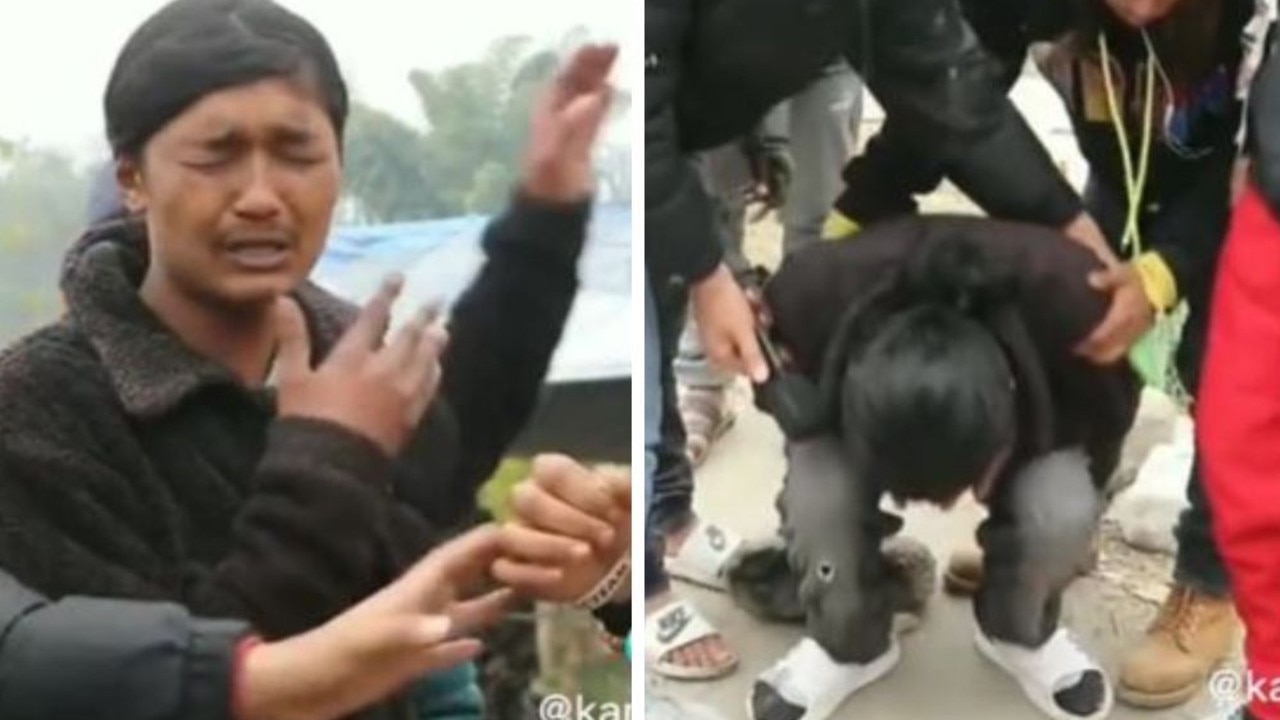 A man has broken down in tears while recalling the moment he tried to save passengers from the burning Yeti plane after it crashed in Nepal.

Bikash Basyal of Seti Khonch in Pokhara, was outside his home at around 10.30am when he saw the doomed aircraft fly above him and suddenly crash.

Hailed a hero, the villager ran towards the scene – and reportedly through the fire – where he attempted to save passengers from the burning wreckage, according to local media.

“I realised the plane had crashed. I opened the gate and ran towards the site. The plane was on fire,” he said, CNN News 18, based in New Delhi, reported.

Want to stream your news? Flash lets you stream 25+ news channels in 1 place. New to Flash? Try 1 month free. Offer available for a limited time only >

Bikash said the aircraft bumped before falling into the gorge. “I rescued two people, who were alive. But they died in Gandaki Hospital, Pokhara.”

Bikash, who was interviewed by local news outlets near the crash site, was seen breaking down in tears as he recounted what had happened.

The villager is trending on social media where many are praising his brave act.

“Really [a] hero,” one TikToker wrote.

“Huge respect to him,” wrote another.

Bikash reportedly carried several dead bodies on his shoulders and was in tears because he wished he could have done more to help.

“He saw the plane crash and was one of the first people to arrive on the scene to help any survivors,” one person wrote, translating the now-viral clip.

“My eyes are blurred from tears. I hope he recovers – he [has] seen a lot,” another person added.

The flight crashed into the gorge between Pokhara’s domestic and new international airports, which only opened on New Year’s Day.

Yeti Airlines, which was operating the flight, said none of the 72 people on board the plane survived.

The plane was flying from Kathmandu, the capital of the Himalayan kingdom, to the central town of Pokhara when it crashed and caught fire, sending thick black smoke into the sky, according to The Times News Service.

The official cause of the crash has not been determined, though one leading aviation expert has suggested an aerodynamic stall could be behind the tragedy.

The plane’s black box and voice recorder were found on Monday evening, with experts now analysing the data to establish what happened.

Australian man Myron William Love, a keen traveller with an interest in surfing, cycling and photography, was among 15 foreign nationals aboard the ATR-72 turboprop.

“Incredibly sad news out of Nepal of a plane crashing with many passengers on board,” Mr Albanese said on Monday afternoon.

“The Government is aware an Australian was on-board and is urgently seeking information from Nepalese officials on the welfare of that passenger.”

Mr Love’s family is still awaiting news and, as such, is not yet commenting.

“We’re not saying anything until the consulate has confirmed the body,” a relative told Daily Mail Australia.

Mr Love’s social media posts showcase his passion for travel and sports. He recently spent time with friends in Thailand.