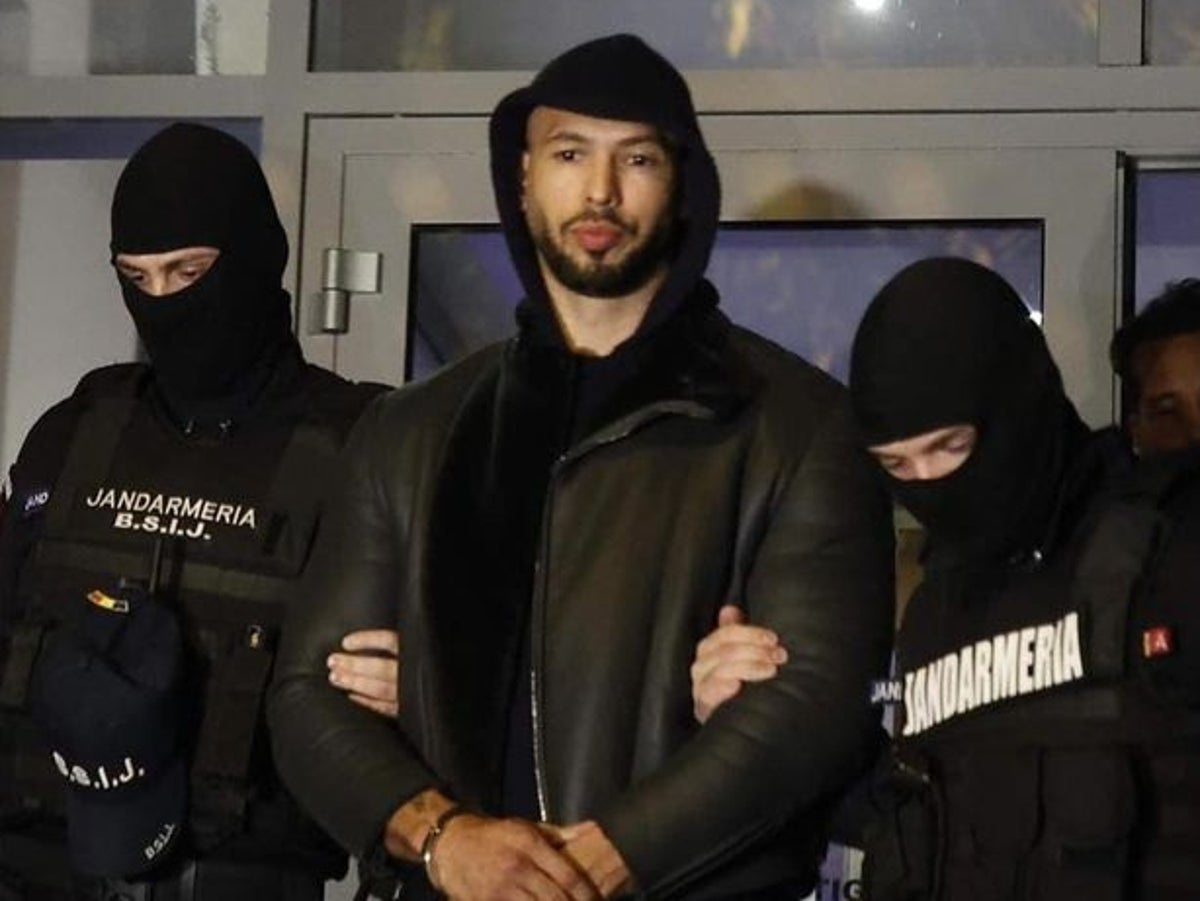 Andrew Tate’s head of security appeared to defend his boss, saying young women “misunderstood the reality” and thought they would be the influencer’s “his next wife”.

In an interview with BBC, Bogdan Stamcusaid more than 100 women have come into Mr Tate’s compound in Bucharest in the past two years and many of the women living with him were under the age of 25.

Mr Tate and his brother Tristan are in 30 day custody of Romanian police after being detained on suspicion of human trafficking and rape, which he denies.

Detectives investigating human trafficking claims against Mr Tate have seized £3.2m worth of assets from his home in Bucharest.

Romanian authorities said that 29 assets – including luxury vehicles, watches and cash – had been taken from the divisive online personality.

On Saturday several cars, including a Rolls-Royce, BMW and Mercedes-Benz, were seen being taken from Mr Tate’s compound on the outskirts of the capital, to be transported to a storage location.

The detained challenged their 30-day arrest warrant, but the Bucharest court of appeals rejected the challenge this week and said they should remain in police custody.

Authorities suspect the pair, along with two Romanian nationals, of running “an organised crime group”.

Here’s how to beat toxic men like Andrew Tate

News of Andrew Tate’s arrest has been met with relief by many hoping this will bring an end to his relevance. However, in my view (and experience) the damage is done. Tate’s views, amplified by social media, has already led to huge numbers of young men from my generation being manipulated, and without urgent intervention we may end up with a lost generation of young men. Let me tell you what I’ve seen.

There is no denying the immense reach Tate achieved. He was the most Googled man over the summer of 2022. Videos with his hashtag have amassed 13 billion views on TikTok. His mentoring scheme currently has 160,000 paying subscribers.

Once you delve into what Tate preaches to the masses, his social media reach is terrifying. Tate has made comments such as, “women bear some responsibility for rape”; has compared women to dogs and proudly confessed in one video with a fellow YouTuber to being an “absolute misogynist”, stating that he was in fact a “realist” and “when you’re a realist, you’re sexist”. The amplification of these views should terrify everyone.

Here’s how to beat toxic men like Andrew Tate

Social media posts by Andrew Tate could serve as a “gateway drug” to children who go on to view more damaging content, teachers have warned.

At one school the head of performing arts Matt Adams decided to hold “Andrew Tate assemblies” due to fears over what pupils interested in the influencer are exposed to online.

Mr Adams teaches at a west London school, and told The Independent boys he had spoken to would either support Tate outright, make excuses for him or claim he had been misquoted.

Andrew Tate: A timeline of his rise and fall

Eugen Vidineac, a lawyer representing the 36-year-old and his brother Tristan, who has also been detained, has insisted that “there is not a single piece of evidence apart from the victim’s statement” to back up the allegations.

Mr Tate has amassed millions of followers across Facebook, Instagram, Twitter, YouTube and TikTok over the past decade. But he has also seen his accounts banned over inflammatory statements he has made, often appearing to advocate violence against women, which the platforms ruled violated their policies.

The rise and fall of Andrew Tate: A timeline

In an interview with BBC, Andrew Tate’s head of security Bogdan Stancu dismissed women who are accusing the controversial influencer and said some “girls misunderstood the reality”.

“Some of the girls misunderstood the reality and believed [they would] be his next wife,” Mr Stancu said. “When they realised the reality, it’s easy to transform from a friend into an enemy, and make a statement to the police.”

He said more than 100 women passed through the compound in Bucharest in last two years and some were under 25. Their expenses were paid for by Mr Tate.

He called the women accusing his boss “young and stupid” and said, “I never doubt Andrew”.

Who is Tristan Tate?

When influencer Andrew Tate was arrested in Romania during a police raid, he was detained alongside three other people – one of them his brother, Tristan Tate.

The 34-year-old is two years younger than his older brother Andrew. He has followed in the footsteps of his sibling in more ways than one.

Tristan started off as a kickboxer in his hometown of Luton where he grew up with Andrew as the middle child of three siblings. He learned kickboxing at Storm Gym in Luton under coach Amir Subasic and later became a four-time ISKA kickboxing champion.

After Andrew Tate lost his appeal last week challenging the 30-day arrest warrant under which he is currently detained, a cryptic post on his Twitter account read: “When Allah said ‘I test only those I love.’ I took the pain like it was an honour – Abu Hurayrah.”

It was one of several ambiguous posts that have appeared on the account since his arrest.

For those joining us on the blog who are still unaware of who exactly Andrew Tate is, my colleagues on The Independent’s lifestyle desk have put together this explainer:

While no charges have yet been brought against Andrew Tate, a spokesperson for Romania’s National Anti-Trafficking Agency claims the case is already sending a strong message to traffickers and victims.

“The fact that the justice system has decided to keep the brothers in custody, even during the preliminary phase of the [case], sends a very important message,” Mihaela Dragus told the BBC.

How can we stop losing vulnerable men to the ‘manosphere’?

In this feature asking “how we can stop losing vulnerable men to the ‘manosphere’”, Matthew Neale speaks to Ali Ross, a psychotherapist and spokesperson for the UK Council for Psychotherapy (UKCP), who often helps men struggling to find their place in the world.

Despite the aggressive language of such influencers, he believes that what makes them so appealing to men isn’t just the invective, but the comforting message that sits at the heart of their narratives: it’s not your fault.

“The reason why men connect with what people like Tate are saying is because they’re feeling disenfranchised and misunderstood,” he explains. “But like many men, they don’t know how to be vulnerable, how to review their choices or take responsibility for their lives.”

You can read the full piece here:

People like Andrew Tate put men at risk – how do we stop them?

Romanian authorities have seized luxury cars from the compound of influencer Andrew Tate, who remains in custody on rape and trafficking charges.

Anti-organised-crime prosecutors detained Mr Tate, his brother Tristan and two Romanian female suspects on 29 December on charges of forming a criminal gang to sexually exploit six women. They have denied any wrongdoing.

How Andrew Tate became the poster boy of the hard-right

Tate should have been anathema – instead, he became a well-dressed, wealthy caricature of a successful ‘alpha male’, writes Katherine Denkinson.

Opinion: How Andrew Tate became the poster boy of the hard-right

Generation Tate: How can we stop losing vulnerable men to the ‘manosphere’?

Try to ignore it all we like, but young men across the world are being seduced by the misogynist, conspiratorial teachings of influencers, writes Matthew Neale. Is early compassion the way to stop it?

People like Andrew Tate put men at risk – how do we stop them?

As you might have read in recent weeks, Andrew Tate has a huge following online and his “misogynistic” views are gaining traction, particularly among disaffected young men.

Mr Tate views have become so widespread among teenagers that some schools have begun holding assemblies to counteract what critics describe as his dangerous ideology.

Here, Matt Adams, a teacher at a performing arts school in west London, talks about the impact Mr Tate is having on pupils there:

Opinions: I’m a teacher – this is what my students are saying about Andrew Tate

ICYMI: This is why young men are still listening to Andrew Tate

He’s been banned before from Twitter and TikTok and even arrested – but the self-proclaimed misogynist’s influence abounds, writes Clint Edwards.

Opinion: This is why young men are still listening to Andrew Tate

Re-cap: who is Andrew Tate?

Andrew Tate is no stranger to controversy.

The former kickboxer and social media influencer, who has gained notoriety over the years for peddling misogynistic views, was detained in Romania on Thursday 29 December on suspicion of human trafficking, rape, and forming an organised crime group, which he denies.

But who is Mr Tate? Roisin O’Connor, Ellie Muir and Saman Javed report:

Romanian authorities said they have seized goods and money worth 18 million lei (£3.2m) as a part of a criminal inquiry into alleged human trafficking that led to the arrest of divisive internet personality Andrew Tate.

In the past week, the National Agency for the Management of Seized Assets has taken into administration 29 movable assets, including luxury vehicles and watches, and various amounts of cash in different currencies, it said in a statement late on Saturday.

On Saturday several cars, including a Rolls-Royce, BMW and Mercedes-Benz, were seen being taken from Mr Tate’s compound on the outskirts of the capital, Bucharest, to be transported to a storage location.

Mr Tate, his brother and two Romanian female suspects were detained on 29 Dec on charges of forming a criminal gang to exploit six women sexually. They have denied wrongdoing.

Good morning and welcome to our rolling coverage of the Andrew Tate case.

The controversial British-American online personality is detained in Romanian on suspicion of human trafficking and rape, which he denies.

We’ll bring you any updates as they come in.