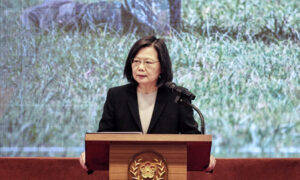 Taiwan President Tsai Ing-wen told Pope Francis in a Jan. 23 letter that constructive interaction with China can only be guaranteed if the Chinese Communist Party (CCP) respects Taiwan’s democracy and freedom.

Tsai cited a speech she gave in October last year in which she emphasized that war with China is “absolutely not an option” and that Taiwan is willing to engage with the CCP to reach a “mutually agreeable arrangement.”

“In my National Day speech last year, I reiterated that peace and stability in the Taiwan Strait are the foundation for the development of cross-Strait relations and armed confrontation is absolutely not an option,” Tsai said, according to a copy of the letter released by her office on Monday.

The Taiwanese leader wrote the letter in response to the pope’s World Day of Peace message on Jan. 1.

Tsai pointed to the war in Ukraine, saying that the conflict has made people throughout the world realize how crucial peace is and that sustaining regional stability has gained significant support.

According to Tsai, Taiwan has sent aid to Ukraine and given masks and other safety gear to nations affected by the COVID-19 outbreak in an effort to “give the world a better Taiwan.”

“Though we are still excluded from the World Health Organization (WHO), we are convinced that taking the lead in making positive contributions will drive a ‘virtuous circle,’” she added.

Taiwan has often criticized that efforts to combat the COVID-19 pandemic have been impeded by its barring from the WHO as a result of Chinese pressure. China and the WHO have both refuted the accusation.

The Vatican is Taiwan’s sole European diplomatic ally, and Taiwan has watched with concern as Pope Francis moved to improve relations with the CCP. Taiwan has formal ties with only 14 countries, largely due to Chinese pressure.

Taiwan has been a self-governing democracy since the Chinese civil war ended in 1949. Still, the CCP regards Taiwan as a breakaway province that must be united with mainland China by any means necessary.

Tsai made a similar assertion in her New Year’s speech, ruling out armed confrontation with China and urging the CCP to cooperate in achieving regional stability.

She stated that despite escalating cross-strait tensions, Taiwan is ready to help the CCP deal with the recent uptick in COVID-19 cases.

“If need be, we are willing, out of humanitarian concern, to provide necessary assistance to help more people get through the pandemic and enjoy good health and peace of mind in the new year,” Tsai said on Jan. 1.

China has seen a surge in COVID-19 cases after the CCP abruptly lifted its strict zero-COVID policy last month. According to officials and studies, most of the population has been infected, and crematoriums and hospitals have been overwhelmed.

Tsai did not detail the kind of support Taiwan could give China, although she did mention that the two nations shared some difficulties.

“War has never been a way to solve problems, and only through dialogue, cooperation, and joint efforts toward the goals of regional stability and development can we help more people enjoy security and happiness,” she said.

The Vatican and China entered into an unpublished agreement in 2018 that gave the Chinese regime the authority to appoint bishops and granted the Pope the right to veto its appointments, according to a 2019 report (pdf) of the U.S. Congressional-Executive Commission on China. The agreement was extended in October 2020 and again in October 2022 for another two years.

Cardinal Joseph Zen, the bishop emeritus of Hong Kong, has criticized the agreement with China since its inception, calling it a “betrayal.”

In September 2020, before the agreement extension, Zen traveled to the Vatican hoping to meet the Pope to update him about the situation in Hong Kong and the Catholic Church in China, reported Daily Compass.

“The idea of striking accords with Beijing is insane. It’s like trying to make a pact with the devil,” Zen told the news outlet about the Vatican-China deal.

Zen was not able to get an audience with Pope Francis and returned after four days, Daily Compass reported.

In May 2022, Zen admonished the deal, saying, “The Vatican may have acted out of good faith, but they have made an unwise decision.”

In July of the same year, Pope Francis reiterated his hope that the deal could be renewed when it was set to be extended in October 2022.

Zen and others have accused the Vatican of turning a blind eye to human rights violations in China. The Vatican says it needs to have means to enter into dialogue with Beijing.