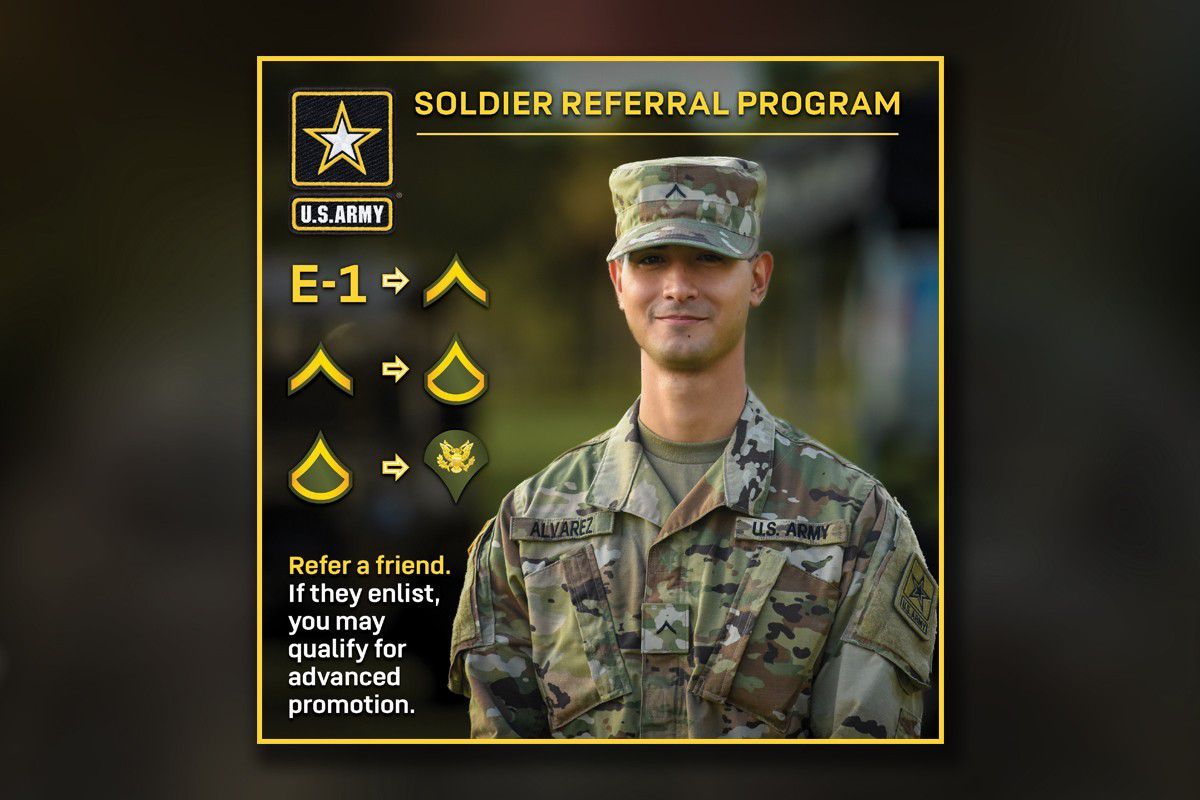 The Army announced a new recruiting referral program Monday afternoon aimed to inspire soldiers to refer friends and family in return for ribbons and accelerated promotions.

The Soldier Referral Program pilot comes in the wake of a recruiting slump that saw the Army end fiscal 2022 at an estimated 20,000 troops under its authorized end strength.

The service’s top leaders — Army Secretary Christine Wormuth, Chief of Staff Gen. James McConville and Sergeant Major of the Army Michael Grinston — explained that the pilot was “driven by Soldier suggestions” in a joint letter to the force published Monday. Army Times reported the service’s plan to establish the ribbon on Jan. 11.

Soldiers become eligible for referral incentives when they refer applicants who successfully enlist and ship to initial military training. Applicants are eligible for referral regardless of whether they’ve previously served in the military, Army personnel directorate spokesperson Lt. Col. Joseph Payton told Army Times via phone.

The new program includes two major initiatives, which will apply to the active Army, Army Reserve and Army National Guard:

The accelerated promotions pilot will last for a year, according to the memo, but the Army directive establishing the recruiting ribbon instructs service officials to revise permanent regulations to include the award.

The top general for Army Recruiting Command, Maj. Gen. Johnny Davis, said in a release he was “excited” for the program to “leverage motivated junior Soldiers throughout the Army to engage high-quality recruits.” Davis added that he hopes “Soldiers everywhere will discuss the benefits they’re afforded through service with their friends and family.”

The directive, signed by Wormuth, also hints that the ribbon may be used in future talent management initiatives.

“This program provides increased recruiting awareness throughout the Army and encourages Soldiers to embed themselves within their communities to share their Army stories,” said Wormuth in the directive. “It may also help to identify junior Soldiers who are best suited for recruiting duty as they advance in rank.”

A similar accelerated promotion program known as “Stripes for Buddies” already exists in the Guard, where new soldiers receive up to two promotions, from private to private first class, in return for enlistment referrals. It’s not yet clear whether the new pilot program will supersede regulations allowing multiple promotions through recruiting referrals. Many states also have their own recruiting referral ribbons.

How to refer recruits

The Army senior leaders’ joint letter states interested troops can make referrals in one of three ways, including a QR code printed on the document that will likely be reproduced on other materials advertising the program.

Referred troops must submit their own contact information and the information of the soldier who talked to them, according to the letter.

A new page on the GoArmy website asks applicants to enter their personal information to speak with a recruiter, as well as the name and Defense Department identification number of the current soldier who referred them.

Another method is to text “RFRL” to 462769 (GOARMY), which will respond with a link to the referral form.