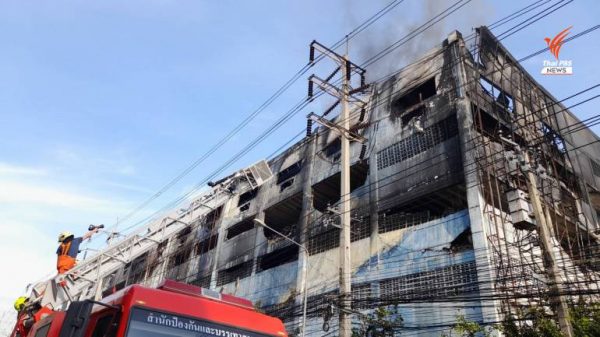 Officials have closed to traffic a road running parallel to the out-bound Bang Na-Trat Highway, due to concerns that a shoe factory, which was heavily damaged by a fire last night (Tuesday), might collapse, posing a risk to motorists.

Fire fighters took about five hours to extinguish the fire at the factory, which is a five-storey building and which was heavily damaged, said officials.

Two workers suffered burns in the fire, which started at about 5.30pm. The first floor of the building is the showroom and the other floors are production units and shoe storage.

The closure of a 300-metre stretch of the parallel road at KM15 of the outbound highway has caused traffic congestion extending for several kilometres, said officials from the Bang Chalong Tambon Administrative Organisation (TAO).

They explained that the road closure is necessary for the safety of motorists.

Building inspectors are scheduled to be on-site this afternoon to inspect the factory’s structural integrity and that of nearby buildings. Bang Phli district health officials will also check people living in the factory’s vicinity.

Alternative protein beefs up for the mainstream | Greenbiz