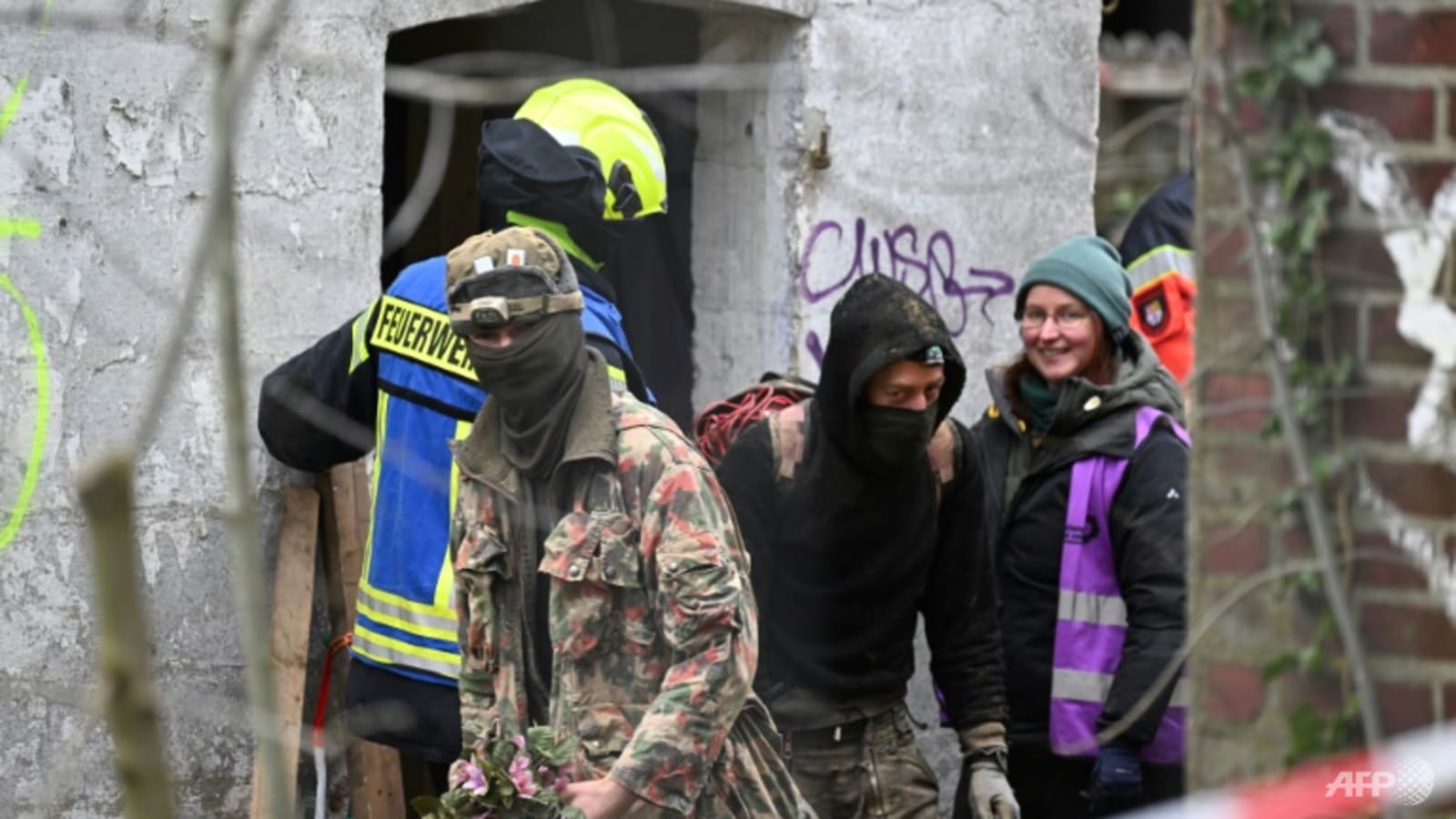 LUETZERATH: The last two climate activists occupying a western German village to stop it making way for a coal mine extension left their underground hideout on Monday (Jan 16), marking the end of the police operation to evict them.

Already abandoned by its original residents, Luetzerath has become a symbol for resistance against fossil fuels.

Around 300 activists occupied the village, staking out emptied building and building positions in the trees, to try to prevent the expansion of the adjacent Garzweiler open-cast coal mine.

Police launched an operation on Wednesday to clear the protest camp, making quicker progress than expected.

By Sunday, authorities had succeeded in removing all but the last two, holed up in a self-built tunnel under the settlement.

The end of the operation came despite a huge demonstration held on Saturday, attended by Swedish climate activist Greta Thunberg.

Police estimated that 15,000 people participated in the rally, but organisers put the turn out closer to 35,000.

Protest planners accused authorities of “violence” after clashes between police and participants, which resulted in injuries on both sides.

Energy giant RWE has permission for the expansion of the mine under a compromise agreement signed with the government, led by Social Democrat Chancellor Olaf Scholz.

Under the deal agreed in October, Luetzerath will be demolished, while five neighbouring villages are spared.

At the same time, RWE also agreed to stop producing electricity with coal in western Germany by 2030 – eight years earlier than previously planned.

With Russia’s gas supply cut in the wake of the invasion of Ukraine, Germany has had recourse to coal, firing up mothballed power plants.

The extension to the mine, one of Europe’s largest, is deemed necessary to secure Germany’s future energy supply.

“It was necessary and of course it is a sin in terms of climate policy and of course we should work towards keeping this sin as short as possible and not constantly prolonging it,” said Economy Minister Robert Habeck.

But activists, who feel betrayed by Green politicians like Habeck, argue extracting the coal will mean Germany misses targets under the Paris climate agreements.

The end of Luetzerath comes after years of local resistance to the expansion plans left a different kind of mark on the area.

In the nearby village of Keyenberg, recently spared from the bulldozer, local resident Thomas Schueller told AFP that “90 per cent” of his neighbours had already moved out.

“When the first street empties, then the others go, too,” said the 51-year-old who has lived in the village since birth.

“We never thought there was a chance to save this place,” said Schueller, a house painter by profession.

“I only wish it had happened 10 years earlier, then most people wouldn’t have moved away.”

Keyenberg native Wolfgang Wangerin, 42, said he felt a “pain in my heart, because I knew I would never be able to show this (place) to my children”.

“When I found out that this place had been saved, it was very emotional,” said Wangerin.

“For me, this is the most beautiful place on earth,” said Alexandra Bruene, 45, whose current home near Holzweiler to the south of Luetzerath was finally excluded from expansion plans in 2014.

Bringing new life back to the area would now take at least “five to 10 years”, she told AFP.

For automakers, the EV surge is everything everywhere all at once