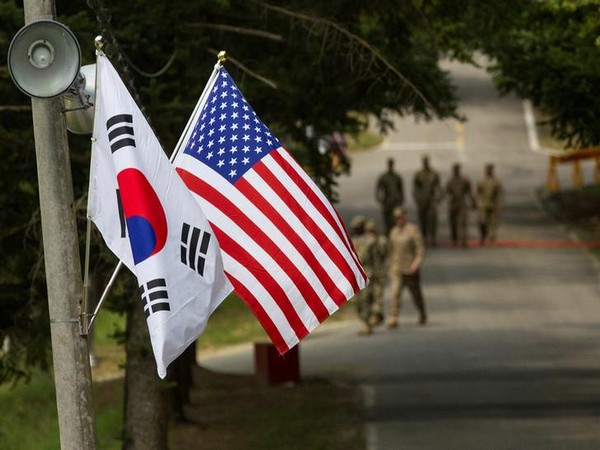 Washington [US] May 22, (ANI): The United States and South Korea have expressed their willingness to engage diplomatically with North Korea to complete denuclearisation on the Korean peninsula.
In a media address at the White House after Biden met with his South Korean counterpart Moon Jae-in, both the countries expressed their willingness to engage diplomatically with North Korea.
South Korean President Moon was the second foreign leader to be hosted by US President Joe Biden since he took office, after Japanese prime minister Yoshihide Suga last month – a pair of visits that underscored the importance of both Asian alliances to the Biden administration’s foreign policy.
According to the Straits Times, both leaders stressed they were on the same page when it came to North Korea, with Moon welcoming the Biden administration’s “calibrated and practical” approach to denuclearisation, and Biden said that the US would proceed in close consultation with South Korea, reported the Straits Times.
President Biden also announced on this occasion veteran diplomat Sung Kim would be the new US special envoy for North Korea. Sung Kim, who has served as US ambassador to Indonesia, the Philippines, and South Korea, was involved in the six-party talks and helped organise the 2018 meeting between President Donald Trump and North Korean Chairman Kim Jong Un in Singapore.
President Moon welcomed Sung Kim‘s appointment, calling it a reflection of “the firm commitment of the US to exploring diplomacy and its readiness for dialogue with North Korea“, and said he expected a positive response from North Korea, as reported by Straits Times.
Progress on denuclearisation has largely stalled since the Singapore Summit in 2018, a landmark meeting which the pro-engagement Moon was credited with helping bring to fruition.
Biden said on Friday that he would meet Kim Jong Un on the condition that the North Korean leader was willing to discuss his nuclear arsenal.
Moon also announced that the US and South Korea had agreed to end guidelines limiting Seoul’s development and possession of missiles, which had been first put in place in 1979 but gradually loosened since 2001.
The US and South Korea also agreed on a comprehensive partnership on Covid-19 vaccines which would boost the global supply of vaccines, said Biden, adding that Washington would also supply vaccinations for the 550,000 South Korean troops who engage with American forces on a regular basis.
Said Moon: “The US has the ability to develop vaccines and Korean companies have the capability to produce the biomedicine. We are going to combine those capabilities so we can boost the vaccine supply to accelerate the rollout of vaccines to the entire world, especially in the Indo-Pacific region.
He added: “In the process, Korea will get some help in stabilising our vaccine supply.”
Moon has been seeking to boost South Korea‘s vaccine production capability, given the difficulty of reaching Seoul’s goal of herd immunity in the country by November due to insufficient vaccine supply in the short term.

Without giving details, Biden said that he and Moon had discussed a partnership between one of America’s major vaccine producers and a Korean company, to produce more vaccines.
South Korean media reported that Samsung Biologics, the Samsung Group’s biopharmaceutical arm, and American drugmaker Moderna were set to seal a deal allowing Samsung to produce vaccines in South Korea.
The two leaders also reaffirmed the strength of the US-South Korea alliance, with Biden calling it a linchpin of peace, security, and prosperity in the region.
They also discussed stronger cooperation with partners in the region including ASEAN and the Quad grouping of the US, Australia, India, and Japan, said Biden, reported by Straits Times.
“Multilateral cooperation is particularly important to coordinating an approach to the situation in Burma, as we work to pressure the junta to restore democracy for the people of Burma, and to address issues critical to regional stability, such as…preserving peace and stability across the Taiwan Straits,” he added, using the old name for Myanmar.
Absent from the leaders’ public comments on Friday was any mention of China, despite media reports that the Biden administration had been pushing Seoul to take a harder line on Beijing.
In response to a question, Moon said that he had not been pressured into taking a tougher stance on China’s posturing on Taiwan and that the US and South Korea will work more closely to safeguard peace and stability in the Taiwan Strait.
Analysts say that Seoul has been reluctant to be more vocally critical of China, fearing retaliation from its largest trading partner.
Patrick Cronin, the Hudson Institute’s Asia-Pacific security chair, told The Straits Times that although China was something of an elephant in the room, Seoul and Washington did not seem to be in disagreement over China.
The Biden-Moon meeting was instead characteristic of the Biden administration’s focus on finding areas of practical cooperation, he said.
One aspect of US-South Korea cooperation appeared to be in direct competition with China, however – investing in semiconductor supply chains and boosting research and development in next-generation mobile network technology, areas in which China wants to become dominant.
A White House fact sheet said that American and Korean companies would invest worth more than USD 25 billion (S USD 33 billion) in technology and innovation, including in semiconductors and advanced information communications technologies.
Said Cronin: “That’s China by another name and that’s fine. Those are practical things that Korea and the US can do, whether it’s the vaccine or batteries or 6G. All of those are issues that are part of the technological competition with China.”
He added: “This is a summit that reflects the fact that North Korea is not going to make any big concessions soon, but we’re going to still try diplomacy. Meanwhile, the alliance is moving forward on technology and the pandemic.
“We know China is there, but…we’re going to focus on the positive gains our alliance can make on technology, economics, the post-pandemic economy and so on.” (ANI)

Celebrate your love at JEN Maldives Male’ by Shangri-La