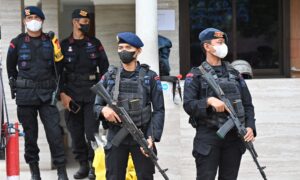 JAKARTA—Two workers were killed in clashes and rioting at an Indonesian nickel smelter at the weekend, officials said on Monday, as hundreds of security personnel were deployed to maintain order after a protest over pay and safety spiraled out of control.

An Indonesian and a Chinese worker were killed during the clashes at the PT Gunbuster Nickel Industry (GNI) smelter, owned by China’s Jiangsu Delong Nickel Industry, which involved protesters, workers and security guards, said Didik Supranoto, a spokesperson for Central Sulawesi police.

Several company vehicles were torched and about 100 dormitory rooms were damaged, Didik said.

National police chief Listyo Sigit Prabowo said 17 people were suspected of vandalism among 71 detained over the incident, and more than 500 members of the security forces had been deployed to secure the area, with more reinforcements coming.

“The smelter will resume operation tomorrow morning. I ask that community and employees not be easily provoked,” he said at a news briefing.

There were about 11,000 Indonesian workers at GNI’s plant and 1,300 foreign personnel, Listyo said.

GNI launched the smelter in late 2021 with an annual capacity of 1.8 million tons and estimated total investment of $2.7 billion.

Protester Minggu Bulu, a member of the labor group and former GNI employee, said there had been fatal safety lapses at the facility in the past year, including a motorcycle crashing into heavy machinery and an explosion at the smelter.

GNI could not immediately be reached for comment on the allegation and police were unable to confirm whether deadly accidents had taken place.

“Work health and safety implementation is very poor, so we asked the company to implement it according to the law,” Minggu said, adding that workers also lacked proper safety gear.

GNI in a statement said it was conducting an “in-depth and thorough investigation” with police.

Violent protests have broken out sporadically in the mineral-rich region of Sulawesi, which has seen a recent investment boom in nickel that is used in electric vehicle batteries.

A government team will be sent to the site on Tuesday while the coordinating minister overseeing mining, Luhut Pandjaitan, would summon GNI’s management next week, his deputy Septian Hario Seto said.

Chinese foreign ministry spokesperson Wang Wenbin on Monday said the Chinese embassy in Indonesia has been in contact with Indonesian authorities about the incident.

“China will continue to maintain close communication with the Indonesian side and promote a lawful and appropriate resolution to this incident,” he said.

By Bernadette Christina and Ananda Teresia

How an Alabama Farmer’s Secret Act of Charity Turned Contagious