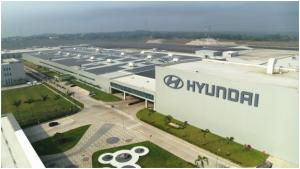 Hyundai Motor Co. is revving up its efforts to penetrate the Association of Southeast Asian Nations (ASEAN) market based on its Indonesian plant, which started operating last year.

Hyundai Motor Manufacturing Indonesia (HMMI) rolled out 82,416 units in 2022, according to the Indonesian Automobile Manufacturers Association (GAIKINDO), ranking 6th among automakers producing cars in Indonesia. A total of 1,470,146 cars were produced in Indonesia in 2022. HMMI accounted for 5.6 percent of the total.

HMMI began producing vehicles at a factory built on a 777,000-square-meter site in the Deltamas Industrial Complex in Bekasi, Indonesia, from January last year. The company manufactures four models — the strategic model Creta and Stargazer, the mid-size sports utility vehicle (SUV) Santa Fe, and the electric vehicle IONIQ 5. Among them, the Creta and the Stargazer are also exported to overseas markets. In 2022, HMMI exported 42,444 vehicles, taking fifth place among automakers in Indonesia. Hyundai Motor vehicles produced in Indonesia are transported to the ASEAN region. Hyundai Motor’s sales in Indonesia were tallied at 31,965 units on a wholesale basis, putting the company at 8th place in Indonesia.

Hyundai Motor’s strategy is to accelerate its penetration of the ASEAN market dominated by Japanese carmakers by taking advantage of the transition of the auto market to electric vehicles. To this end, Hyundai Motor is building a battery cell factory in Indonesia in partnership with LG Energy Solution.