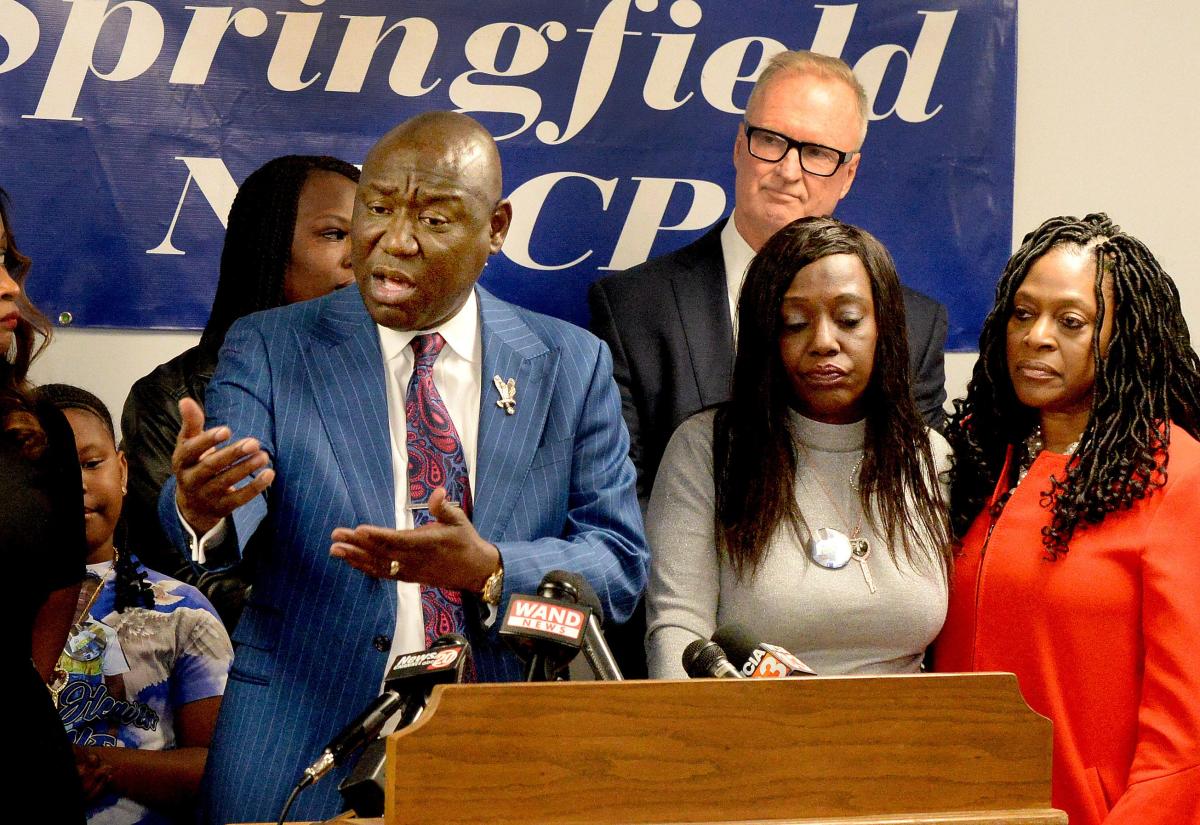 Two emergency medical services workers accused of killing a Springfield man by strapping him tightly against a stretcher appeared in Sangamon County Circuit Court Thursday, as preliminary hearings began in a case that has garnered national attention.

Peter J. Cadigan, 50, and Peggy J. Finley, 44, both of Springfield, made brief appearances before Judge Raylene Grischow to confirm a preliminary hearing for each would be held at 9 a.m. Friday.

Cadigan and Finley were each charged with one count of first-degree murder.

Cadigan and Finley were first in court Jan. 10 when each was held on $1 million bonds.

The two are accused of killing Earl Moore, Jr. 35, of Springfield on Dec. 18 by strapping him tightly and face down on a stretcher, causing “compression and positional asphyxia,” according to Dr. John Scott Denton, a forensic pathologist from Bloomington.

As Cadigan and Finley were in court Thursday, Moore’s family announced that they filed a wrongful death lawsuit in Sangamon County court, with civil rights attorney Ben Crump representing the estate. Cadigan, Finley, and LifeStar Ambulance Services, Inc. were listed as defendants.

Crump, in Springfield Thursday, called Moore’s case “unique and unlike any case that I’m aware of currently in America,” a reference to the charges against the EMS workers.

Robert Hilliard, another attorney on the civil lawsuit, did not specify an amount of damages the family is seeking. Springfield attorney Sam Cahnman is also working with Crump and Hilliard on the lawsuit.

Springfield Police called an ambulance to Moore’s residence in the 1100 block of North 11th Street early on the morning of Dec. 18. After initially receiving a call about multiple subjects at the residence with guns, three SPD officers found that Moore was in medical distress after detoxing for several days.

He was pronounced dead at HSHS St. John’s Hospital a little more than an hour after the initial call.

According to the criminal complaints filed by Sangamon County state’s attorney Dan Wright, Finley and Cadigan knew that “based upon their training, experience and the surrounding circumstances, that such acts would create a substantial probability of great bodily harm or death.”

Attorneys for Cadigan and Finley said the body camera footage captured by Springfield police officers did not show that their clients committed any wrongdoing.

W. Scott Hanken, Finley’s attorney, said that while Finley’s conduct could be considered negligent, it didn’t reach the level of first-degree murder.

“I think for them to charge them with first-degree murder is a huge leap,” said Hanken, a Springfield attorney. “They’re trying to turn negligent conduct into criminal conduct. Quite simply, what occurred does not rise to the level of first-degree murder as they have charged it.”

At a press conference at the NAACP headquarters in Springfield, Crump said he wanted to make sure Moore’s family got “whole justice, not just partial justice, not piecemeal justice. We want to make sure we have criminal culpability and civil accountability.”

Crump said Finley and Cadigan offered Moore, who was Black, “no consideration from the moment they get there. It’s like a hostile encounter. They offered him no professionalism, no humanity.”

Hilliard, a Corpus Christi, Texas, attorney joining Crump on the legal team in the lawsuit, compared the asphyxiation Moore suffered from to “being buried alive.”

Hilliard said Moore slowly suffocated after being strapped to the gurney.

Addressing the uniqueness of the case, Crump said “you would think if anyone is going to be focused on their first objective, to try to make sure his health is stable, that (it) would be health care professionals.

“This is the first time I’ve seen captured on video where you first responders on the scene not caring about the health of marginalized people of color, namely this Black man named Earl Moore.”

Rosena Washington said her heart was broken by her son’s loss.

“My son was really struggling and he needed help,” Washington said. “He needed emergency medical attention and instead these workers treated him like he wasn’t even human. They tied him down like some kind of animal and killed him.

“I should’ve never had to bury my son.”

Moore’s sister, Chatara Moore, said “it feels like a piece of me has gone with him” since he was killed.

The national and Springfield Urban League welcomed the intervention of Crump and Hilliard.

“For more than 15 years, the Springfield Urban League has worked to build trust between communities of color and health care institutions, an effort which took on even greater urgency during the COVID pandemic,” Springfield Urban League president and CEO Marcus Johnson said. “The malicious behavior of paramedics Peggy Finley and Peter Cadigan has sabotaged that trust and makes it that much harder for Black Americans to seek and receive the health care they need.”

Finley has worked as a paramedic in the Springfield area for four years. She has four children and six grandchildren.

Cadigan, a father of two children, has worked in emergency services for over 25 years. He and the former ambulance service he worked for, MedicsFirst, Inc., were subjects of a 2010 wrongful death lawsuit.

Cadigan struck and killed seven-year-old Truvonte Edwards, who was riding his bike near the corner of 11th and Phillips streets on April 19, 2008. Edwards died at St. Louis Children’s Hospital the next day.

More:Your cash is no good at this fast-food restaurant’s drive-through window

Edwards’ mother, Brandy Houston, and father, Matthew Edwards, filed the lawsuit, but a court ruled in 2014 that Cadigan was not culpable for failing to stop in time. A three-judge panel affirmed the decision.

No charges were ever filed against Cadigan in Edwards’ death.

Moore was a manager at McDonald’s, 522 W. Jefferson St., for more than 15 years, according to his cousin, Aaron Cutler, though he worked there even longer.

Cutler and his wife, Samantha, lived with Moore at the time of his death.

Teresa Haley, the president of the Springfield branch of the NAACP and its state director, said the civil rights group will keep fighting for justice for Moore’s family.

“We have to continue to live in this community,” Haley said. “We are going to continue to fight for justice for Earl and anyone else who was faced with this unfortunate situation.”

Hilliard said there are different plaintiffs in the lawsuit, including the estate of Moore and the family’s claims.

A jury, he said, will listen to family members’ testimonies as well as expert and medical testimony to determine value “based on the facts.”

“I really believe the uniqueness of this litigation is the criminal charges and the civil case will go hand-in-hand because it’s similar conduct.”

LifeStar has been sued for failure to train, to monitor and evaluate its employees, Hilliard added.