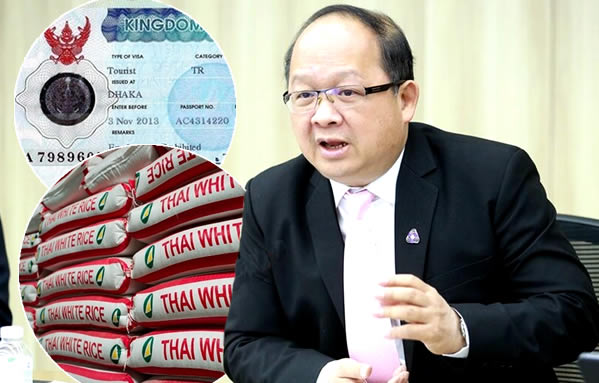 Downturn in exports and manufacturing is filtering into the wider economy while the recovery of the foreign tourism industry is still a slow and ongoing process with one Thai bank, Krungthai, estimating that it will be 2026 before the critical industry for powering the economy returns to 2019 levels.

Danucha Pichayanan, the Secretary-general of the National Economic and Social Development Council (NESDC), the government’s key economic agency, has called on ministers to make visa provisions for foreign tourists more flexible and user-friendly while also marketing the kingdom’s legalisation of medical marijuana or pot in a bid to boost the still slow recovery of the country’s critical foreign tourism industry. It comes as Thai exports have plummeted with the Chairman of the Federation of Thai Industries (FTI), this week, revealing that business confidence fell in December for the first time in seven months as the country’s industrial confidence index fell due to faltering output.

The Chairman of the Federation of Thai Industries (FTI) has issued a stark warning to the government that confidence in the manufacturing sector has been undermined with the country’s industrial confidence index for December falling for the first time in seven months.

Mr Kriengkrai Thiennukul also expressed concern about the number of holiday days in the coming weeks which may further impact production and output contributing to a decline in GDP growth.

The industry leader again pleaded his body’s concerns to the government concerning the planned hike in electricity costs in January by as much as 20% as well as the gradual rise in interest rates or borrowing costs which are expected to be seen over the course of the year to come as the Bank of Thailand makes up ground with small incremental increases after holding the country’s borrowing costs to levels below its peers in Southeast Asia last year and significantly, below those in the United States where borrowing costs are now running at between 4.25% and 4.5% compared to only 1.25% in Thailand.

Mr Kriengkrai also cited continued high levels of inflation in the system and expressed concern over increased levies being imposed by the Bank of Thailand on financial institutions to contribute to a development fund as contributing to additional financial charges being imposed on Thai business concerns battling against declining exports and a highly uncertain world still buffeted by the war in Ukraine and simmering tensions between the United States and China resulting in trade restrictions and embargoes.

Not all bad news, business chief acknowledges the reopening of China’s borders and more tourists as good news for Thailand despite other troubles

The business leader was not all doom and gloom however and noted the uptick in foreign tourism prospects with the reopening of China’s borders and a short-term drop in oil prices.

In relation to higher oil prices which feed into inflation, there are fears in the year ahead of a further disruption caused by the war in Ukraine with a planned Russian offensive, China’s economy contributing to rising demand and reports that the Organization of the Petroleum Exporting Countries (OPEC) is ready to follow through on its plans to significantly cut output this year.

Mr Kriengkrai also urged the government to explore every possible way to boost the kingdom’s foreign tourism prospects at this time although he still acknowledged the need for public health vigilance.

‘Tourism this year will return to be an important engine that helps drive the economy instead of exports that have begun to cool down due to the global economic slowdown. The tourism sector must accelerate the number of flights into the country. Including controlling the epidemic according to public health measures in balance with driving the economy so that there will be no more lockdowns,’ said Mr Kriengkrai.

He implored the government to look at measures to assist the business sector with the price of electricity and to take steps to ensure the Thai baht is managed so as to restrain the recent volatility seen in the market.

Thailand’s rice industry, in particular, is losing ground to competitors because of an elevated value of the Thai baht right now with higher prices sought by producers.

This has led to a warning from a Thai exporters group which fears that the kingdom may not reach its 2023 goal of exporting 8 million tonnes this year with a projection that the figure will be only 7.5 million tonnes.

On Wednesday, the Thai Exporters Association raised its concerns about the rising value of the Thai currency which, it says, is driving up the international market price for Thai exports of the foodstuff.

The Honorary President of the association, Mr Chookiat Ophaswongse, suggested that the current trend in the currency market could see the price of Thai rice increase by up to $50 a tonne to buyers which is significant.

On Thursday, the Thai baht was quoted at ฿33.09 for the dollar but has gone higher over the last week and at one point, was 13.25% more expensive against the US currency since mid-October 2022 making Thai products more expensive as most international goods settlements are still calculated via the US currency.

Mr Chookiat said he saw no problem in the coming months with supply in Thailand but the problem, with prices being quoted at $490 to $495 a tonne, is that Thailand is losing out on trades to rival countries on margin calls because of the slightly elevated price.

He said this was happening despite strong external demand for rice and other foodstuffs with the highest prices available in recent years. He attributed the problem to the sharply higher cost of the baht.

‘Despite the fact that there is foreign demand, customers will still purchase from other sellers because of cost,’ Mr Chookiat explained.

Last year saw Thailand exporting 8 million tonnes of rice but this came at a time when India had placed an embargo on its own rice exports from its ports due to fears that demand in the populous country may have exceeded supply.

In normal times, India is a key competitor of Thailand’s export industry in the international rice marketplace.

Reports from reliable sources such as Bloomberg now suggest that the authorities in New Delhi are thinking about removing some or even all of the current export restrictions on Indian rice as market prices in the huge country have stabilised with adequate stockpiles to meet both market demand and government welfare programmes.

Analysts say Thai economy will grow by 3.7% but all now depends on the doubling of foreign tourist visitor numbers from last year, no other problems

It comes as a Bloomberg survey conducted on Thursday shows economists and analysts still not convinced that Thailand’s economy will spring back to high growth levels.

The survey showed a median prediction of 3.7% growth for 2023 and comes with reports that the 3.2% figure logged for 2022 may yet have to be revised downwards because of a stronger-than-expected downturn in exports in the last two months of the year and after the kingdom only recorded 1.6% growth in 2021 following a catastrophic setback in 2020 when the country lost no less than 6.1% of its GDP.

The projection for 2023 is dependent on the doubling of foreign tourist arrivals and no other setbacks this year as well as some sort of recovery in the export sector.

The disastrous performance in 2020 and weaker growth since came after another anaemic year for growth in 2019 when Thailand’s economy only grew by 2.2% after the kingdom suffered from the effects of the US-China trade war which is still ongoing.

Since then the kingdom has lost its critical foreign tourism engine with Krungthai Bank, this week, projecting it may not return to normal until 2026.

In the meantime, the kingdom is suffering from a rapidly ageing population, high private sector debt and reduced inward investment as opposed to investment pledges.

These problems have not been adequately addressed amid crisis and firefighting since the onset of the US-China trade war in 2019 and before that, the government’s emphasis on creating political stability in the aftermath of the 2014 coup which remains in itself another chronic problem.

Krungthai Compass, the research arm of Krungthai Bank, last week predicted only 22.5 million foreign tourists in 2023 with 4.8 million of these being Chinese visitors.

Danucha Pichayanan, the Secretary-general of the kingdom’s respected National Economic and Social Development Council (NESDC) was reported on Thursday as expressing concern at the current trend in Thailand’s exports despite the confidence expressed in recent days by the Thai National Shippers’ Council that exports will still grow by between 1 and 2% in 2023.

Planning agency, the NESDC, to meet on February 17th to review the economic outlook but urges more to be done in attracting foreign visitors to Thailand

Mr Danucha said that his body would review the country’s economy and projected GDP performance again on February 17th next.

The key economic planner called on the government to foster a more positive approach to potential foreign tourists by allowing more flexible visa provisions and marketing Thailand’s recent legalisation of marijuana for medical use to boost the current projection for foreign tourists in 2023 which is only just over half that seen in 2019.

The slow recovery of Thailand’s foreign tourism industry is beginning to worry planners, especially in 2023 when the kingdom is more vulnerable with exports and manufacturing under pressure because of the global world economic downturn which is impacting all the world’s economies.

Japan’s Nomura Holdings, the influential global investment bank, also this week raised fears, despite assurances to the contrary this week from the Fiscal Policy Office of the Ministry of Finance that public investment spending on infrastructure projects would be speeded up.

It said that there was a danger that the government will be more cautious about spending especially with weaker economic growth and lower tax returns which we have begun to see.

The bank also warned that the aftermath of the 2023 General Election expected on May 7th, may lead to a period of political instability and possibly a government without a coherent economic policy due to the potential need for a political compromise.

Receive all our stories as they come out on Telegram here

Even as the baht surges, Thailand faces economic recession in mid-2023 with lower earnings

Good economic news, test now is how to emerge from stagflation with large price shock looming as inflation rises

Prolonged Ukraine war to see Thai inflation at 6.3%, a stalled economy and a possible downgrade