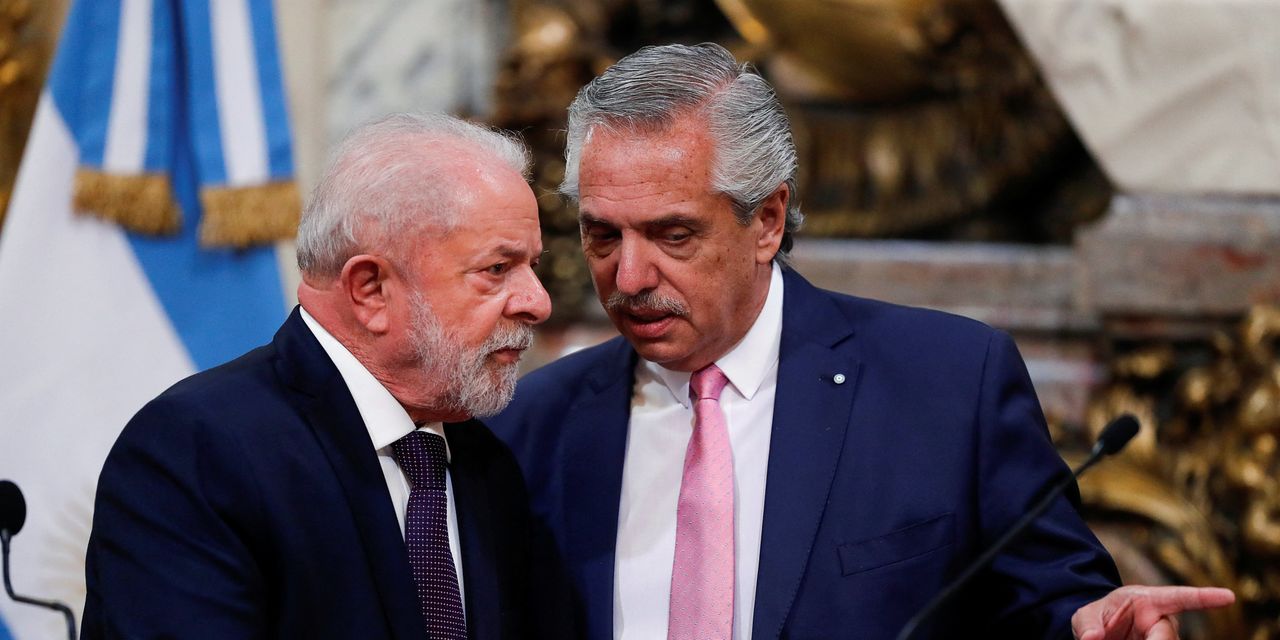 SÃO PAULO—Brazil and Argentina have started preliminary talks to create a common currency, as their leftist leaders revive a proposal that economists and central bankers have long criticized.

“We decided to advance discussions on a common South American currency that can be used for both financial and commercial flows, reducing operational costs and our external vulnerability,” Mr. da Silva and Argentine President Alberto Fernández wrote in the op-ed, which appeared in Argentina’s Perfil newspaper on Saturday, ahead of the Brazilian leader‘s arrival in Buenos Aires on Sunday.

The leaders emphasized the importance of maintaining each country’s currencies, implying that any new currency would operate in parallel to the Brazilian real and Argentine peso. “We intend to overcome the barriers to our exchanges, simplify and modernize the rules and encourage the use of local currencies,” they wrote.

Mr. da Silva said their objective was to reduce the region’s reliance on the U.S. dollar, which is commonly used in bilateral trade in Latin America.

“If it were up to me, we would always trade in the currency of the other country so we wouldn’t have to depend on the dollar,” Mr. da Silva told reporters Monday.

Mr. da Silva’s openness to coordinating currencies sparked criticism from business leaders and opposition politicians in Brazil who said they saw the move as an ominous start to his economic policy three weeks into his presidency.

The 77-year-old former trade-union leader, who served two earlier terms ending in 2010, has promised to increase spending and handouts to poor Brazilians while ending the privatization of state firms.

“It’s unbelievable that Lula is even considering creating a common currency between Brazil and Argentina—it’s like opening a joint bank account with that unemployed deadbeat friend who owes everyone money,” Fábio Ostermann, a state deputy for the business-friendly New Party, said on Twitter. “It makes NO sense.”

Mr. da Silva will attend a summit of Latin American and Caribbean countries in Buenos Aires on Tuesday. He is looking to use his return to power to forge ties with neighboring countries, most of which now are governed by fellow leftists.

Mr. Fernández, who polls show to be one of the most unpopular leaders in Latin America, is under pressure to offer up quick fixes for Argentina’s economy before he runs for re-election in October. Inflation hit 95% in 2022—the highest in three decades—in a worsening financial crisis marked by rising poverty topping 43%, economic stagnation and dwindling central bank reserves.

Last year, Argentina reached a deal with the International Monetary Fund to refinance a $44 billion bailout to avert a currency crisis in exchange for reducing public spending and money printing that analysts say has caused the financial turmoil.

“It is about creating expectations,” Sergio Berensztein, a political analyst and pollster in Buenos Aires, said of the currency announcement. “There is not much that the Fernández administration can show to the electorate, and this is a way to create some expectations for the future.”

Brazil and Argentina, South America’s two largest economies, have weighed forms of currency integration for decades to achieve regional integration and reduce their reliance on the dollar. In 1987, they signed an agreement to create a common currency called the “Gaucho,” and later proposed the creation of a regional currency following the birth in 1991 of the South American Mercosur customs union, which includes Uruguay and Paraguay.

But a series of economic crises in Argentina and trade spats with Brazil over Brasília’s efforts to protect its local car industry from imports have thwarted greater regional integration. Many private economists are skeptical of a currency plan with Argentina, one of the most protectionist economies in the world. Argentina’s Central Bank isn’t independent, a contrast with Brazil, and Buenos Aires widely uses price and currency controls.

“It’s been decades that Argentina and Brazil have been attempting to build an economic union, but so far they haven’t even created a free-trade area and Mercosur is a highly imperfect customs union,” said Arturo Porzecanski, an economist who specializes in Latin American economies at the Washington-based Wilson Center.

Argentines have long stashed billions of dollars in overseas storage vaults and bank accounts, a practice that economists say highlights local demand for greenbacks and a lack of confidence in the peso. Argentine demand for dollars is also underpinned by a parallel currency market, where the peso was trading Monday at 375 per dollar versus the official rate of 190.

“The only other currency people in South America want to carry in their pockets is the U.S. dollar,” said Mr. Porzecanski.

Brazilian Finance Minister Fernando Haddad said the currency talks arose from the need to address a real problem: a lack of U.S. dollars in crisis-ridden Argentina that is making it difficult to trade with Brazil, as bilateral trade is largely carried out in dollars. But he said the governments were studying several possibilities.

“The problem is precisely the foreign currency, right?” Mr. Haddad said in comments to reporters late Sunday. “So we are putting our heads together to find a solution, something in common that could make commerce grow because Argentina is one of the countries that buys manufactured goods from Brazil and our exports there are falling.”

Argentina’s ambassador in Brazil, Daniel Scioli, said earlier this month that he had discussed the possibility of a common currency with Mr. Haddad but the Brazilian finance minister played down the possibility, later telling reporters that such a proposal didn’t exist.

“At a practical level I think they are going to see if there are ways to settle trade without using the U.S. dollar,” he said.

—Silvina Frydlewsky contributed to this article.

Write to Samantha Pearson at samantha.pearson@wsj.com and Ryan Dube at ryan.dube@wsj.com