This Secret Bar at Disney World Is Full of Easter Eggs 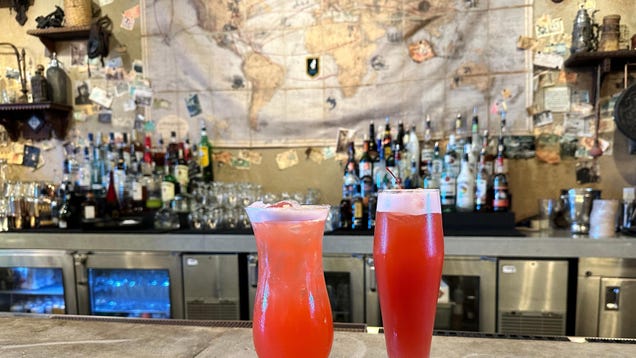 You know how it starts: Indy swaps the bag of sand for the golden idol and all the booby traps go off. He escapes a room of flying spears, barely jumps over a bottomless pit, rolls under the closing trap door (saving his whip, of course) and runs for his life from an enormous stone ball rolling toward him in one of the most memorable scenes not just in Raiders of the Lost Ark, but all of modern moviemaking.

Just as he tumbles out of the cave into the safety of the Peruvian jungle, he’s faced with another peril: a group of Indigenous hunters led by an evil Nazi treasure hunter who steals the idol and orders the men to kill Indiana Jones. As Indy barrels down the hill, we see a man wearing an “air pirates” shirt, sitting on the one of the floats of his seaplane, fishing.

“Jooooooock!” Indy yells. “Start the engine! Get it up!” Our hero makes it to the plane, only to find a giant snake waiting for him in the cockpit.

JOCK: Come on, show a little backbone, will ya?

That’s it. That’s the entirety of Jock’s appearance in the Indiana Jones franchise. And yet there’s an entire restaurant dedicated to him at Walt Disney World.

Jock Lindsey’s Hangar Bar is located in Disney Springs, the shopping and dining area that’s part of the Walt Disney World Resort but not inside any of the Disney parks. From the outside, Jock’s just looks like an old-timey aviation-themed bar. But when you walk inside, you quickly realize that it’s secretly a restaurant devoted to one Dr. Henry Jones, Jr.

On Disney’s website, the restaurant’s description is simple: “Quench your thirst at this vintage airplane hangar-turned-dive bar.” But if you’re a fan of the movies, the theme swiftly makes itself obvious the moment you walk in the door, and you’ll see more evidence of it as soon as you look at the menu.

The dishes make some overt references to the movies—there are Club Obi Wan chicken wings and Shorty’s Singapore Sling, both callbacks to Indiana Jones and the Temple of Doom. Same with the Anything Goes cocktail, in reference to the song Kate Capshaw sings inside Club Obi Wan in the opening of the movie.

That Star Wars reference is intentional, by the way: George Lucas famously included crossover Easter eggs in his two biggest film franchises. In addition to “Club Obi Wan” referencing Star Wars character Obi-Wan Kenobi, both Han Solo and Indiana jones sport a bullwhip, and there are hieroglyphics depicting Leia and R2-D2 in Raiders of the Lost Ark.

As for Raiders of the Lost Ark references, there are a lot more than just menu items, though there definitely are those, too, like Dr. Forrestal’s churrasco and a cocktail called Reggie’s Revenge. Most guests probably don’t make a point to stop and examine the locker on the way to the restrooms, but if you did, you’d be rewarded by spotting the actual headpiece to the Staff of Ra that Indy uses to determine the location of the ark of the covenant.

And if you look very, very carefully at the collection of junk above the front door, you might catch a glimpse of something golden that just might be (definitely is) the ark itself.

Besides being Indiana Jones’ pilot for roughly two minutes of screen time, there’s another reason Jock Lindsey is important: Disney Imagineers wrote him into Disney’s secret society, the Society of Explorers and Adventurers, whose ranks include Barnabas T. Bullion, owner of Big Thunder Mountain Railroad, and Samantha Sterling, whose passport is hidden inside the same locker as the headpiece at the Hangar Bar.

There are so many more Easter eggs to discover at Jock Lindsey’s. I’ve been half a dozen times and I still see something new every time I go. Last time, I spent some time on Jock’s boat outside, where you can sit and have lunch. I’ll leave it to you to figure out why the boat is named “Vasquez de Coronado.” If you do, well, you belong in a museum.