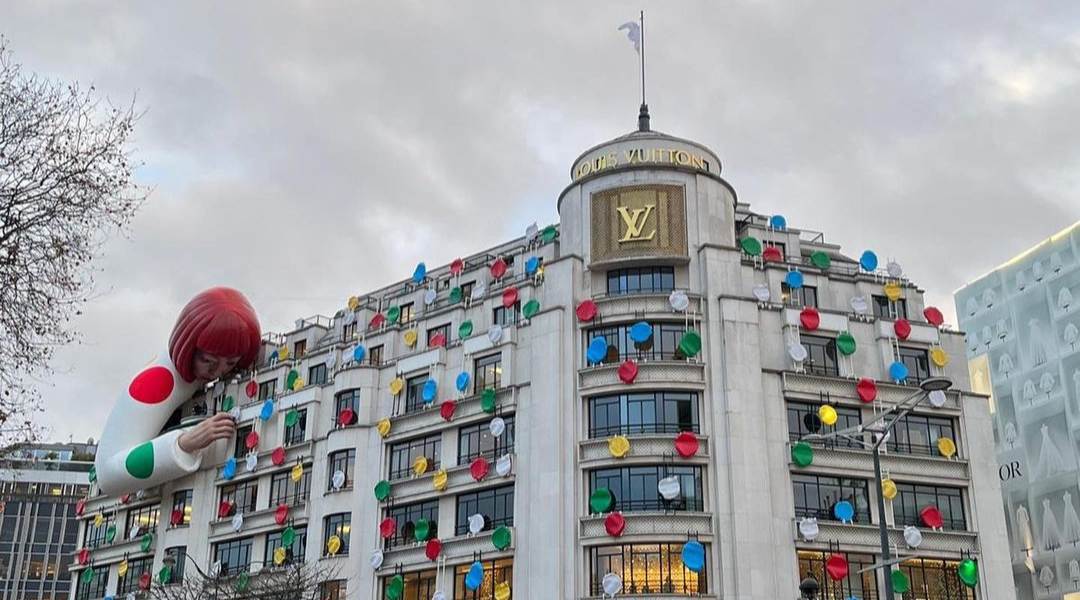 Following Yayoi Kusama’s long standing partnership with this luxury brand, a massive sculpture has been constructed over its flagship store in Paris.

A giant inflatable depiction of the contemporary artist is seen looming over the Art Déco building, looking as though she’s placing the polka-dots herself.

Similar displays have been found in Louis Vuitton stores in New York, London, and Milan.

This is the second time the fashion house is collaborating with Kusama, following their first successful joint venture in 2012.

Their partnership began when Marc Jacobs, Louis Vuitton’s then creative director, visited Kusama’s art studio in 2006. She hand-painted her famous polka-dots on a Louis Vuitton Ellipse bag which sparked the idea for a collaboration.

Kusama, now 93 years old, was born in Matsumoto, a city in Nagano Prefecture, Japan. Dealing with a rough childhood, she began experiencing hallucinations at a young age.

Her way of coping with this was to translate her experiences into painting and other forms of art. “My artwork is an expression of my life, particularly of my mental disease,” explains Kusama.

Today, her work is known all over the world and has influenced many other artists, from Andy Warhol to Yoko Ono.

Delphine Arnault, Louis Vuitton’s executive vice president, says that the collaboration was a year and a half in the making, over Zoom calls and online file-sharing during the pandemic.

“One of the aspects of her work is happiness, and we thought it would be really refreshing after the pandemic to have the worlds of Vuitton and the world of Kusama meet again,” Arnault says.

Higher And Higher: Lamborghini’s Rise From Tractors To Supercars