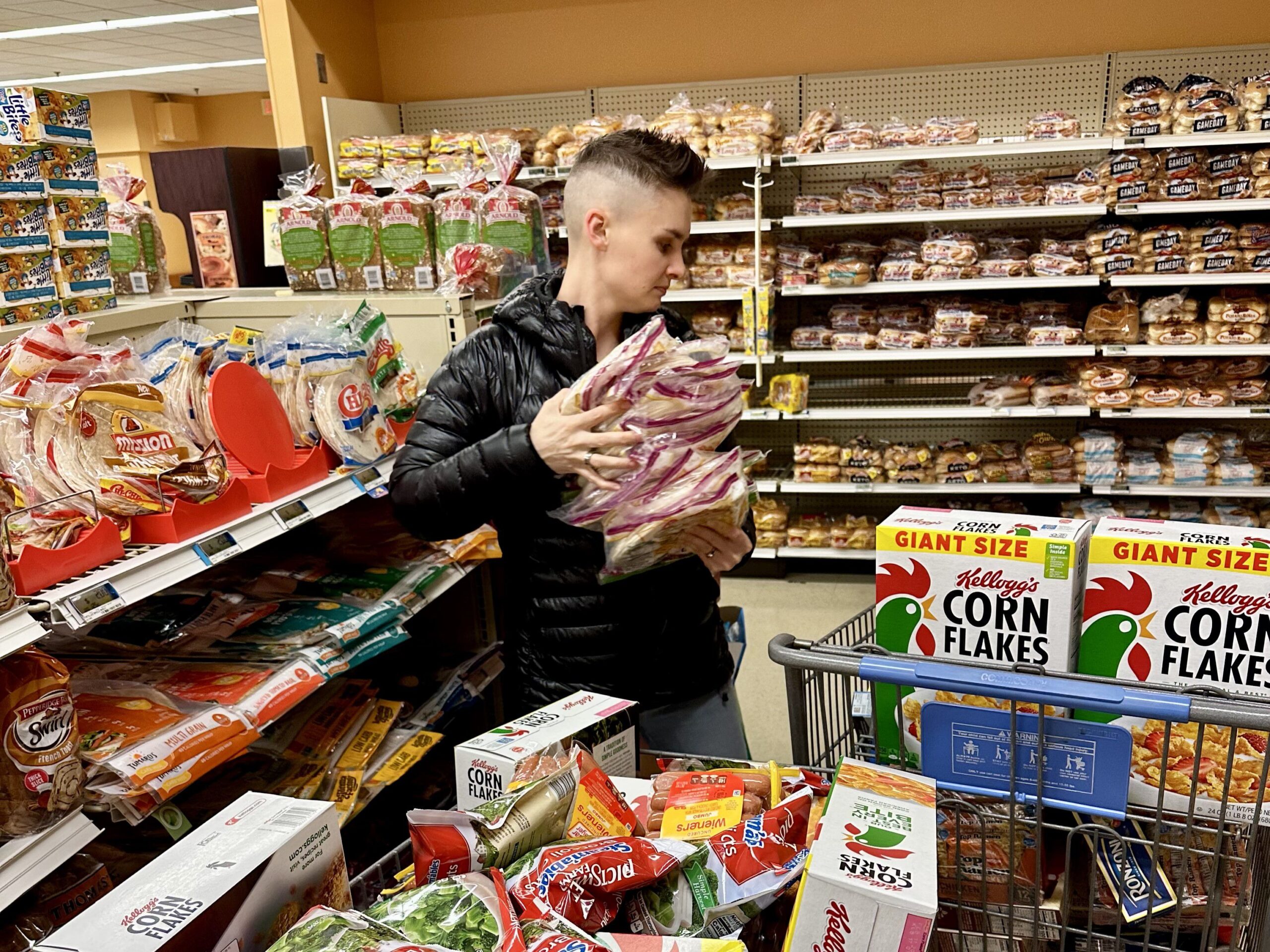 Food insecurity isn’t funny. But one stand-up comedian hopes her humor will garner the attention the problem needs.

“Did you know that most people need to eat to live?” Ashley Gutermuth, an Air Force spouse in New Jersey, deadpans as the camera surveys a table stacked with produce, rice, canned goods and more in a Dec. 15, 2022, Instagram video.

Gutermuth runs an assembly line of grocery donations from her home at Joint Base McGuire-Dix-Lakehurst, New Jersey, where her husband is a full-time Air Force reservist. Across the country, Heather Campbell, a nutritionist and active-duty spouse at Alaska’s Eielson Air Force Base, is cooking homemade meals for local families who can’t afford to eat.

They’re targeting an often invisible part of the Air Force community: those who won’t seek help with meals and groceries, fearing retribution and embarrassment at work, or who can’t reach a food bank.

Gutermuth has delivered grocery packages to about 20 families at Joint Base McGuire-Dix-Lakehurst, New Jersey. Campbell has donated home-cooked meals to 16 families, or about 60 people, at her Alaska base. They use one simple tool — Google Forms — to provide food with the quiet dignity of anonymity.

“I don’t care how they ended up in that position,” Gutermuth said. “You need food.”

When she’s not poking fun at military life on stage or social media, Gutermuth travels as a public speaker and military advocate. She put out a call for stories of hardship that she could share with policymakers around the country, hoping to effect change.

The response: “People were selling plasma, selling their precious items and not eating so they could feed their family,” Gutermuth said.

The problem hit home when she noticed an anonymous post by someone on her base who was looking for pawn shops to make ends meet.

Some hungry families can take advantage of local food banks and pantries, including those on base. But Gutermuth said plenty of people are still falling through the cracks.

“When I first started communicating with the people near me … I felt immensely responsible,” she said. “If people are selling their blood to be able to buy food and they’re active duty, living on base, what can I do?”

Gutermuth and Campbell needed a way to reach the people who wouldn’t reach out themselves. Shortly before Thanksgiving 2022, they came up with an anonymous, no-strings-attached way for families to ask for help.

People can sign up for groceries or meals via Google Forms, and anonymously coordinate dropoff using Google Voice for texts and calls. Anyone can clone the form to replicate the project at their own base.

The forms promise to keep the information confidential and do not ask for names, ranks or income. For example, the Alaska base’s form asks how many people will be eating, whether there are any food allergies to consider, how they want to be contacted and where to pick up the meals.

It also asks how often people worried about running out of food, or did run out of food, without money to buy more in the past 12 months.

“Whether you’ve had financial hardship, a [temporarily reassigned] spouse or just a difficult season, we’re here to serve you in your time of need. You’re not alone,” the Eielson, Alaska, form says.

Some quirks of military life can make troops and their families more prone to food insecurity.

More than one-quarter of active-duty military personnel have experienced food insecurity, according to the federally funded think tank Rand. People were more likely to go hungry if they lived on base and received a housing allowance.

“Food-insecure members were more likely to be early- to mid-career enlisted personnel in grades E-4 to E-6, single with children, married without children, or a racial or ethnic minority,” Rand said Jan. 4. “They also were disproportionately in the Army and, to a lesser extent, the Navy.”

There’s no clear consensus on what causes widespread food insecurity in the military, the think tank added.

Frequent, mandatory moves can send people deep into debt, and federal stipends that offset the cost of living can fall short — particularly in times of high inflation and economic volatility. Troops also face fewer options when staying at installations in so-called “food deserts,” where groceries are in short supply or low quality.

“Imagine having hardly any money, and going to the store and buying that, and then coming home and realizing you can’t even eat it,” Gutermuth said of moldy items at base stores.

Reservists face other unique challenges, like losing out on money from their civilian job while deployed and lacking the support system of an active-duty unit, she added.

She also pointed to a policy flaw that disqualifies service members from receiving food stamps.

“It’s, in reality, a recruitment and retention issue,” particularly among the children of today’s military families, Gutermuth said.

Both women cover the expenses themselves, exceeding $1,000 since November 2022. A few other spouses at Eielson have offered to help pull together a main dish, a vegetable, bread and the occasional dessert, Campbell said.

Gutermuth said she’s received a few hundred dollars from well-wishers that has helped offset the cost. But she’s one person, not a nonprofit, and has pointed other potential donors toward the established 501(c)(3) organizations that could also use the money.

In the meantime, Gutermuth’s career on the road keeps her from growing the project at home. She’s considering creating an Amazon wish list where donors could purchase food for her to deliver.

She’s also exploring the possibility of partnering with national organizations to scale up the program.

“[We] will run down the streets of base housing throwing cheese and potatoes if we have to,” Gutermuth said.

Rachel Cohen joined Air Force Times as senior reporter in March 2021. Her work has appeared in Air Force Magazine, Inside Defense, Inside Health Policy, the Frederick News-Post (Md.), the Washington Post, and others.