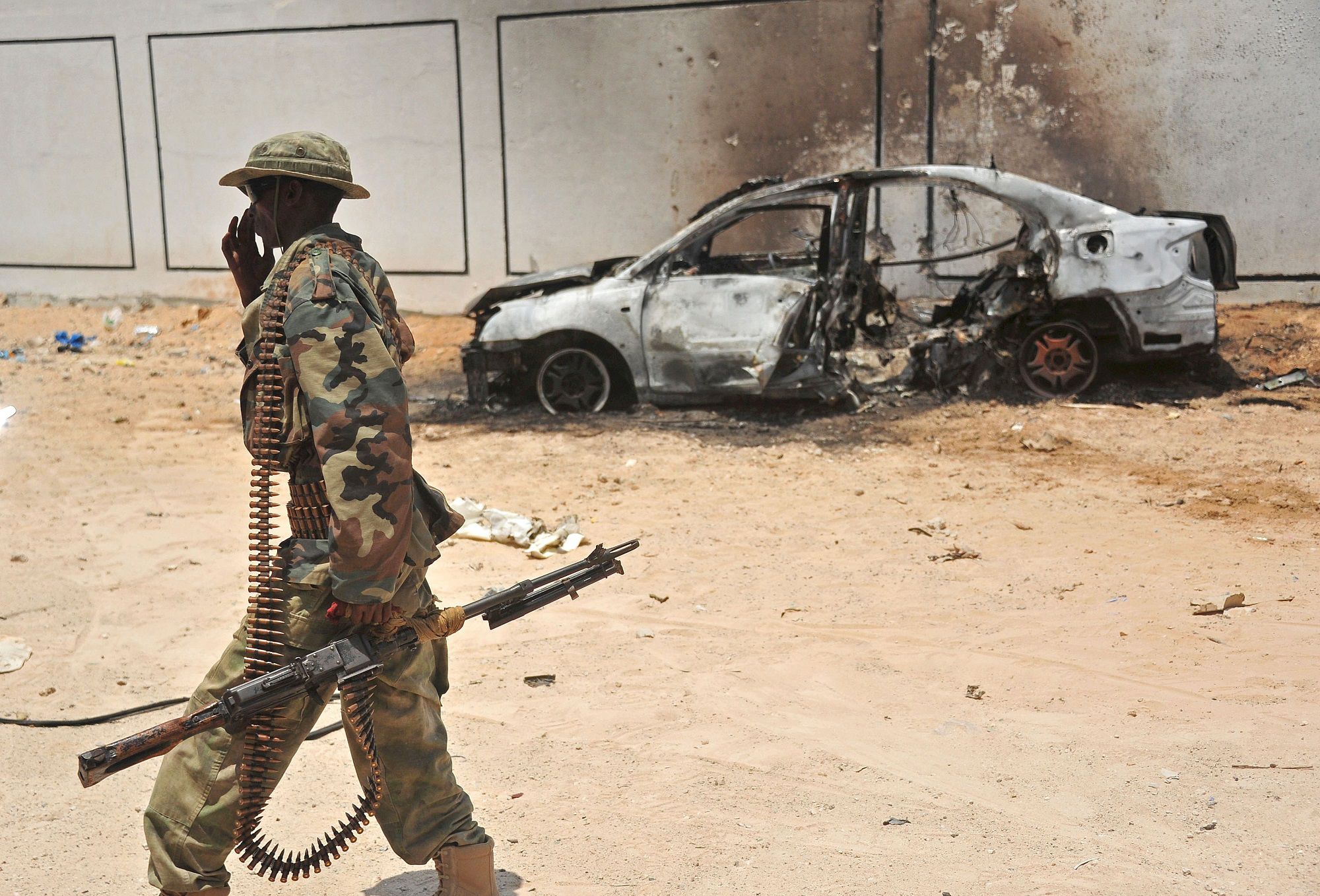 A Somali soldier patrols next to the burnt-out wreckage of a car that was used by suspected al-Shabab fighters on April 16, 2017. (Mohamed Abdiwahab/AFP via Getty Images)

U.S. Africa Command conducted its first airstrike of the year in Somalia on Friday, after an uptick in the number of total airstrikes was recorded last year.

The Somali National Army was engaged in intense fighting against al-Shabab militants more than 160 miles northeast of the capital city of Mogadishu on Jan. 20, according to a statement from AFRICOM. Between ground forces and the U.S. strike, an estimated 30 al-Shabab fighters were killed and three vehicles destroyed.

“Somalia remains central to stability and security in all of East Africa,” a statement from AFRICOM said. “U.S. Africa Command’s forces will continue training, advising, and equipping partner forces to help give them the tools they need to defeat al-Shabaab, the largest and most deadly al-Qaeda network in the world.”

According to the statement, more than 100 al-Shabab fighters were a part of the attack on the Somali National Army.

The latest operations come as U.S. airstrikes in Somalia grew from 11 in 2021 to 15 the following year, according to the airstrike tracker at the Long War Journal. More than 100 al-Shabab fighters were killed by those 15 operations.

AFRICOM’s assessment suggested that no civilians were killed in the strike, given the remote location of the fighting. However, AFRICOM said it would “continue to assess” and provide additional information when and where possible.

AFRICOM also claims that none of its operations in 2022 lead to any civilian casualties.

U.S. airstrikes carried out within the country have not been conducted without scrutiny. In December, Rep. Sara Jacobs, D-Calif., and Sen. Elizabeth Warren, D-Mass., sent a letter to Secretary of Defense Lloyd Austin questioning the accuracy of the Pentagon’s civilian casualty report released in September.

“The Federal Government of Somalia and U.S. Africa Command take great measures to prevent civilian casualties,” AFRICOM said in a statement. “Protecting civilians remains a vital part of the command’s operations to promote greater security for all Africans.”

Despite U.S. air support and advising — along with more than 20,000 peacekeeping troops from the African Union — al-Shabab remains a credible threat against the Federal Government of Somalia. Just four days into 2023, al-Shabab claimed 10 victims in car bombings outside a military training center in Mogadishu.

Zamone “Z” Perez is a rapid response reporter and podcast producer at Defense News and Military Times. He previously worked at Foreign Policy and Ufahamu Africa. He is a graduate of Northwestern University, where he researched international ethics and atrocity prevention in his thesis. He can be found on Twitter @zamoneperez.