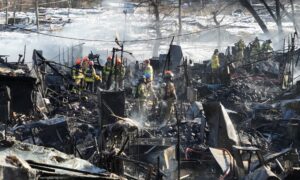 Firefighters extinguished the flames in Seoul’s Guryong village within about five hours, and no injuries or deaths were reported.

Shin Yong-ho, an official at the fire department of Seoul’s Gangnam district, said rescue workers have searched areas affected by the fire but all residents were believed to have safely evacuated.

More than 800 firefighters, police officers, and public workers fought the flames and handled evacuations after the fire began around 6:30 a.m.

Photos showed firefighters fighting the flames under thick, white smoke covering the village as helicopters sprayed water from above. Later orange-suited rescuers searched through the charred landscape where gray tendrils of smoke were still rising. The capital’s skyscrapers gleamed a short distance away.

“How could this happen on the Lunar New Year holidays?” 66-year-old village resident Kim Sung-han told The Associated Press, referring to one of the country’s biggest holidays that starts this weekend and continues through Tuesday.

“I had to run out of home only in these clothes,” without being able to bring out anything else, Kim said. “I couldn’t go to work … when it’s already so hard to live.”

Lee Woon-cheol, one of the community leaders at the village, said residents were able to swiftly alert others to the fire and that firefighters went door-to-door searching for people and helping them evacuate.

“This is where a lot of accidents happen because of electrical short circuits,” Lee told the YTN news channel. The cause of the fire hasn’t been determined.

Kim Ah-reum, an official at the Gangnam district office, said around 500 residents evacuated to nearby facilities including a school gym. Officials say most of them were expected to return home but at least 45 people whose houses were destroyed or severely damaged would be temporarily staying at a hotel. Some of the 60 homes that burned down had been unoccupied.

The news of the fire alarmed South Korean President Yoon Suk Yeol, who while visiting Switzerland for the Davos meetings instructed officials to mobilize all available resources to minimize damage and casualties, his spokesperson Kim Eun-hye said.

South Korea is still coping with its worst disaster in almost a decade, after nearly 160 people died in a crowd surge at a Seoul nightlife district in October. Experts blame that deadly crush on poor planning by police and administrative officials, who failed to employ basic crowd control measures despite anticipating huge gatherings of Halloween revelers.

The hillside village has often been damaged by fire over the years, a vulnerability that has been linked to its tightly packed homes built with materials that easily burn. Eleven houses were destroyed by a fire in March, and floods forced around 100 people to evacuate last August.

The village, which has around 670 homes though not all are occupied, was formed in the 1980s as a settlement for people who were evicted from their original neighborhoods under the city’s massive house clearings and redevelopment projects.

Seoul’s city government first announced plans to redevelop the area in 2011 but the efforts have stalled over disagreements between city officials and residents over land compensation and other issues.