The World Economic Forum’s annual week-long summit comes to a close today. You wouldn’t know that if you read the mainstream papers, who have buried it underneath coverage Ukraine.

But for those of us who were paying attention, it’s been a busy five days in Davos. Let’s take a look at some of the key talks setting the agenda for the coming year.

Very much two sides of the same coin there. Essentially, “how to make people believe us” and “censoring people who disagree with us”

The Distrust panel is 45 minutes of the worst kind of corporate buzzwording you will ever hear. A chore to get through, but there’s definitely an unspoken fear – “How do we stop people turning on us as the economy collapses?”

The most interesting part is the discussion of non-governmental organizations (NGOs), and how they can use identity politics to trick people into trusting them and – among other things – shill vaccines to poor minorities.

This leads to corporate polling company CEO Richard Edelman bemoaning the collapse of trust in NGOs:

“Right-wing groups have done a really good job of disenfranchising NGOs. They’ve challenged the funding groups, they’ve associated you with Bill Gates and George Soros, they’ve said that you’re big world people as opposed to what you are, which is local.”

According to Edelman, five years ago NGOs topped their trust rankings, now they are bottom. That’s a victory for the alternate media, who do diligent research on funding and policy sources for all the benign-sounding NGOs that pop up everywhere these days.

The Disinformation panel is much more direct, with the Chairman of the New York Times claiming in his opening remark that disinformation “maps to every other major challenge we are facing as a society”.

Most of the discussion you can predict. Post-truth this, censorship that. Repeated calls on advertisers to pull promotion money from platforms that spread “disinformation”.

But, if you listen to all 90 minutes of both talks – which I did, you’re welcome – you’ll notice a new recurring theme: Localisation. It’s repeated ad nauseum. People trust local news more,, local news is more applicable to people’s everyday lives, NGOs are successful when people think they are local. Over and over again.

Look out for a resurgence in “local news” as an answer to the proliferation of independent news. NGOs and foundations may well start pouring money into small local papers to create the illusion of community and independence. It’s probably already happening.

[NOTE: If you can stomach Seth Moultons monologue about teaching occupied Iraqis that propaganda is bad, without wrenching or spitting invective at your monitor, you are a stronger man than I.]

Not at all surprising this one. On Tuesday, we were treated to a panel including WHO Director Tedros Adhanom Ghebreyesus on ending tuberculosis, with the focus being on new “safe and effective” vaccines.

Apparently, no new TB vaccines have been available for over a hundred years, but now there are sixteen new products in development.

Kind of like coronaviruses, which were impossible to vaccinate against for decades, only for almost every pharmaceutical company in the world to turn around and spit out a working Covid vaccine in just over a year.

The good news, such as it is, is that at least those TB vaccines (should they ever hit the market) weren’t created, tested and approved in just three months. Because that’s the plan for the “next pandemic”.

Yes, we’re back to the “100 Day Mission” – the WHO’s initiative designed to create a system where any future disease outbreak will have a new vaccine ready to use in 100 days.

We know that #COVID19 will not be the last Disease X. That’s why @CEPIvaccines‘ 100-day mission is so important. Ambitious partnerships like this are crucial for ensuring that when the next Disease X arrives, the world is more ready than it was this time. #wef23 pic.twitter.com/dkW6qBrEcA

Yesterday another panel discussed the future of pandemic preparedness and the “100-Day mission”. It was an all-star affair, featuring the CEO of Pfizer, Tony Blair and Helen Clark, chief author of the UN’s Covid autopsy.

Clark mentions the WHO’s planned Pandemic Treaty and the reformed International Health Regulations, an important reminder that global legislation is very much on the horizon.

Pfizer CEO Albert Bourla mourns the “politicisation” of the Covid vaccines and the national borders which limited their ability to spread their product globally.

But the quotes of the day belong to Blair, who gleefully announces a “whole new host of vaccines and injectables” are on the horizon, and that Covid has provided an opportunity to create “digital infrastructure”

NEW – Tony Blair calls for a “digital infrastructure” to monitor who is vaccinated and who is not for the “vaccines that will come down the line” at Klaus Schwab’s World Economic Forum.pic.twitter.com/t5SM0Lv1hw

To be clear, 100-day vaccines are not possible. But that won’t stop them pushing this.

Canadian actress Evangeline Lilly (of Lost and Ant-Man fame) chose an interesting way to end her career earlier this week, when she promoted Russell Brand’s Davos-themed live stream on her Instagram: 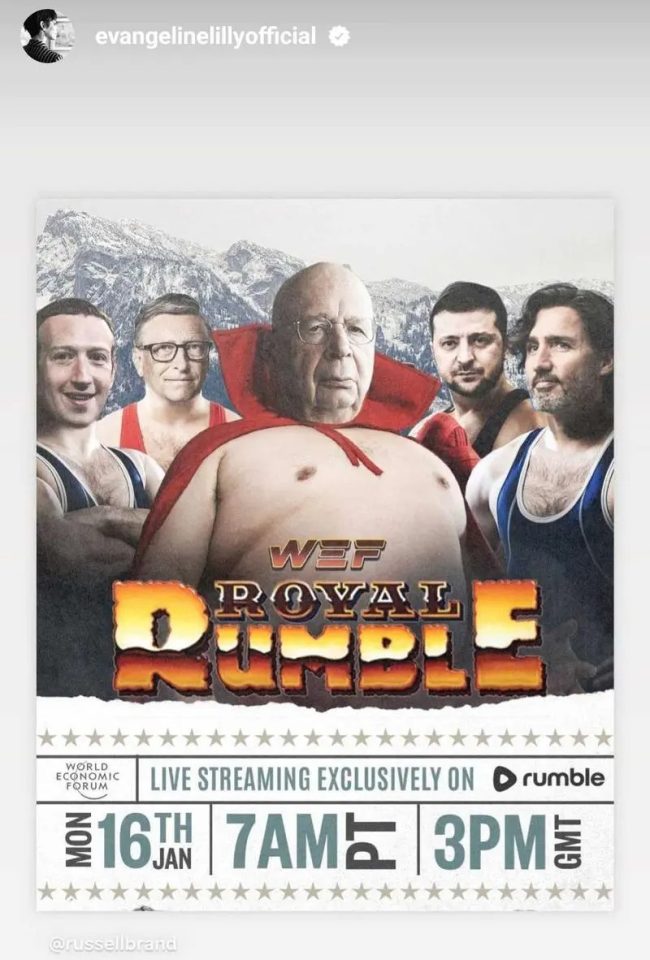 Within a day there were articles accusing her of spreading bizarre “conspiracy theories”.

It’s hilarious, to be honest. Every year the richest, most powerful people in the world – corporate giants, politicians, billionaires and media tycoons – all get together for a week to talk about how they are planning on running the world, but pointing this out to people makes you a “conspiracy theorist”.

Other potentially revealing talks on the programme included:

But what do you think? Did we miss anything important?

There’s a packed schedule in five days of talks, so feel free to share any finds, nuggets or revelations in the comments below.