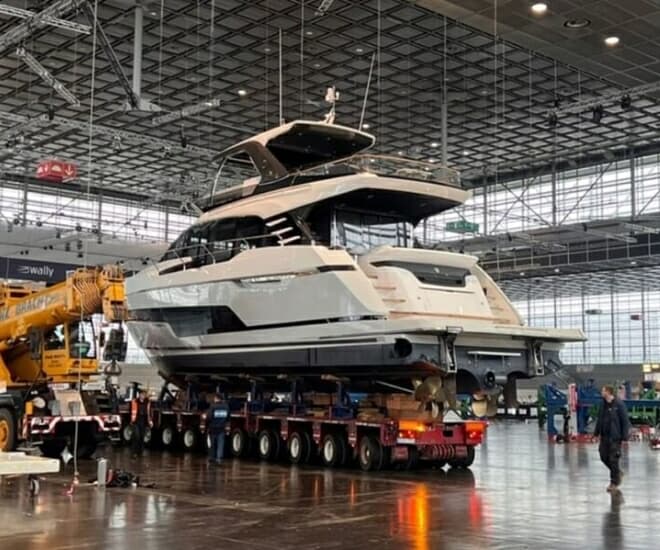 World premieres from the world’s leading luxury yacht builders are a highlight of Boot Dusseldorf’s return after three years.

Brand-new models from Sunseeker, Princess, Azimut, Ferretti Yachts and Jeanneau are among many exciting world premieres at the 52nd edition of Boot Düsseldorf, as the world’s biggest indoor boat show returns for the first time since January 2020.

Three years ago, show organisers announced that over 250,000 visitors attended the nine-day event at Messe Dusseldorf, with about a quarter of the attendees representing over 100 countries outside Germany.

Boot Dusseldorf Director Petros Michelidakis said he was expecting about 1,500 exhibitors at this year’s event, which will again span 16 halls.

“We’re very satisfied with bookings received so far, which will present watersports in their entirety on a huge exhibition area equivalent to 31 football pitches,” Michelidakis said. “There is no other trade fair in the world with such extended ranges and in such an international setting.”

Sunseeker has one of the largest displays with nine models including a bespoke version of its 95 Yacht, among the show’s largest models, while the 88 Yacht and 90 Ocean models launched in 2021 are the British builder’s other 24m-plus superyachts.

The Poole’s yard’s line-up also includes a 76 Yacht, Predator 65, Manhattan 55 and Manhattan 68, but much of the attention will be on the two world premieres, the all-new Superhawk 55 and the 75 Sport Yacht, an upgraded and extended version of the 74 Sport Yacht.

Andrea Frabetti, CEO at Sunseeker International, said: “Sunseeker returns to Boot Düsseldorf with confidence, flair and the most exciting models in the market today. We’re particularly proud to unveil the new Superhawk 55 and 75 Sport Yacht, which will be the crown jewels of our impressive line-up of stunning yachts.”

Princess also has a long history at the show and is hosting the world premiere of its S72, the second biggest model in the S Class behind the popular S78. The Plymouth builder’s seven-strong line-up also includes the V40 cruiser, F45 flybridge and S62 sportbridge, Boot Dusseldorf debuts for the F65 and X80, and the European premiere of the Y85, further boosting the 24m-plus yacht count.

Fairline is showing its flagship Squadron 68 and the Phantom 65, which both are showing four months after their world premieres at the Cannes Yachting Festival. The Oundle-based builder is also showing the F//Line 33, Targa 45 GT and Targa 50 Open.

Paul Grys, CEO of Fairline, said: “We’re delighted Boot Düsseldorf is back and equally delighted to bring two show debuts to such a key event in the calendar. We’ve had fantastic feedback on the new Squadron 68 and award-winning Phantom 65 since visitors first saw the yachts at Cannes. Our investment in new product underpins our growth and we’ve got an exciting period ahead.”

The Pearl 72 makes its European debut following its world premiere at last October’s Fort Lauderdale International Boat Show, where Managing Director Iain Smallridge confirmed the appointment of VP Yachts as the builder’s dealer in Hong Kong. On the second day of Boot, the British brand is announcing details of its upcoming Pearl 82, which is already in production.

Italian builders are also well represented in Hall 6, with Azimut’s four models including the world premiere of the S7, the Alberto Mancini-designed 71ft sport fly. Other yachts comprise the Fly 53 and Fly 78, also by Mancini, and Magellano 66, the entry model for the long-range Magellano Collection.

Ferretti Group will also be staging a world premiere at Boot, unveiling its Ferretti Yachts 580, the brand’s latest model with exterior and interior design by Filippo Salvetti and IdeaeItalia respectively.

Sanlorenzo will display the SD90, one of the show’s largest yachts and fresh from its world premiere at Cannes, while sister brand Bluegame showcases its new BG54 launched last year along with the BGX60 and BG72.

Absolute is showcasing a 56 Fly, whose first hull in Asia arrived in Hong Kong last year before the model’s world premiere at Cannes. Its four-model line-up also includes the 60 Fly that debuted in 2021, a 50 Fly and a 47 Fly.