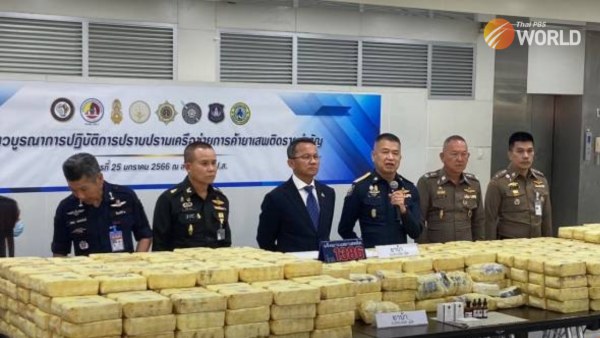 Justice Minister Somsak Thepsuthin said today (Wednesday) that anti-narcotics officers stopped a timber truck and two scout cars at a checkpoint in the district, after they had obtained information that a huge amount of drugs was to be transported, from storage in Mae Fah Luang district to two other storage places in Phrae and Ayutthaya provinces, before they were to be distributed in Bangkok and southern provinces.

The officers found bags of the pills hidden in the timber truck and both scout cars.

Somsak said the five suspected traffickers claimed to have successfully sent three big shipments to the south since October, sending three million pills in October, 3.8 million in November and 3.2 million in early January.

ONCB Secretary-General Wichai Chaimongkhon said that the five suspects were part of a network of Hmong drug traffickers, based in Chiang Rai, who received drugs from a neighbouring country and stored them in Mae Fah Luang district before delivering them, mainly by truck, to storage points in the central provinces, from where they were distributed to Bangkok and elsewhere.

Following the seizure of the drugs, officers have confiscated assets worth 32 million baht from the gang, including seven plots of land, nine cars, five bank books and 598,000 baht in cash in Chiang Rai, Phrae, Nonthaburi and Nakhon Nayok provinces.

Copper price down as week-long holiday in China pauses rally