It was a car that fuelled thousands of teenage fantasies and made the walls of a million more.

It’s no secret that cars which looked shockingly futuristic for their day tend to age badly. As an era that was all about the wings, wedges, and angles, the ‘70s in particular saw some of the most radical designs in all of car history. This Lamborghini, however, is amongst a handful that has managed to keep the shock factor as alive today as it was back then, even half a century later.

Devoid of any curves, the Countach LP500 and its polarizingly wild lines took more than a breaths away when it first appeared at the Geneva Motor Show on 11 March 1971.

Its name was equally brazen; “Countach” is a benign expletive in the Piedmontese dialect used to express astonishment and wonder, and it was exactly what a farmer — who found it hidden in a shed in its final stages of assembly —exclaimed when he first laid eyes on it. Word of this encounter got around and the name stuck, and till this day is one of the best censorship side-step that any company ever got away with.

Its prototype — rendered a bright yellow— didn’t make it onto Lamborghini’s stand then because the marque’s other new arrival, the Miura SV, already had a spot there. Instead, the LP 500 found itself in the exhibition space of Carrozzeria Bertone, the Italian automobile styling and coachbuilding company which was responsible for its exotic design. But it didn’t matter where the car ended up at all. Hell, it could’ve been on display on the other side of the world, and still received the same amount of attention. What ensued sent Lamborghini into a real race against time as they rushed to satisfy eager customers who wanted this futuristic show car on the roads — fast.

The shape of the future

The “Italian Wedge” shape was dreamt up by Marcello Gandini of Bertone’s design studio, whom after nailing the Miura started experimenting with a more unorthodox geometric design language for manufacturers like Lancia, Alfa Romeo, and Lamborghini. In fact, his 1968 Alfa Romeo Carabo and 1970 Lancia Stratos Zero were direct styling precursors to the Countach, so you’ll find plenty of similarities between the three.

A few distinctive features made the Countach so recognisable, even from a mile away. Besides a perfectly square nose, unique side sills, now-defunct pop-up headlights, and a brutally chopped rear end, the car also used only flat sheets of glass. Anything that interrupted the lines of Gandini’s trapezoidal masterpiece at the show, like bumpers, aerodynamic spoilers, and side mirrors were not included. In a final act of showmanship, its doors opened ever so dramatically, scissor-style.

With its clean, futuristic lines, the Countach LP 500 easily found its way into all the international automative magazines of that time. The Miura, with its dramatically swept back windshield and bulging air intakes, was inarguably prettier. The Countach, however, was impossible, and impossible always won the hearts of gearheads. Still, the prototype was substantially different than the Countachs that eventually went into production in 1974.

The Countach Project was marked with the internal code number LP112 — LP for “Longitudinale Posteriore” or rear longitudinal position of the 12-cylinder engine. Paolo Stanzani, who had tenured with Lamborghini since 1963 and was then General Manager and Technical Director, was responsible for the inner workings of the car and he was the first to adopt this layout onto a road-going V12. Besides a better weight distribution, this allowed him to avoid placing the mass of the five-speed manual transmission at the back of the car. It ended up being mounted in the middle of the car between both seats, a decision that effectively gave better stability, a shorter overall wheelbase, and easier and faster shifting to the car. From 1974 to 1990, a whopping 1,999 Countachs in five different series have made the streets. The LP400 paved the way as the first production model with a 3.9-litre engine delivering 370 hp, with little else changed except for the rear lights and slightly more aggressive styling.

From an engineering standpoint, the Countach LP500 prototype was basically a race car, but for the street. Instead of a tubular frame like the prototype though, the production version saw a platform frame that housed a 4.0-litre V12 which was good for 370hp and could go from zero to 100kph in under five seconds — a rare feat at the time. An aggressive shark gill design on the engine air intakes set the tone for the car’s capabilities, and the scissor doors — which first appeared in the above-mentioned Carabo prototype — became the first ever to be used on a production car. They have since characterized the production of Lamborghini’s 12-cylinder models, hence the term “Lambo doors”.

But with all its beauty came a price. Notorious for its god-awful rearward visibility and wide sills, many owners had to double up as gymnasts when reversing into a parking spot by opening the door, balancing halfway out on the door sill, and turning to look over the rear of the car while working the pedals and steering wheel. In 1975, the solution for this was a small periscope mirror that was installed on the roof for better visibility. Only 158 LP400 Periscopicas were built during the car’s first four years of production because the feature was, unfortunately, discontinued after.

The evolution of an icon

The Countach continued to undergo nips and tucks as new production models were introduced; flared arches, spoilers, carburetor covers and bumpers progressively changed not only its silhouette, but also performance and safety. Despite these updates, Lamborghini never touched the basic shape of the 1971 prototype over its 19-year lifespan. 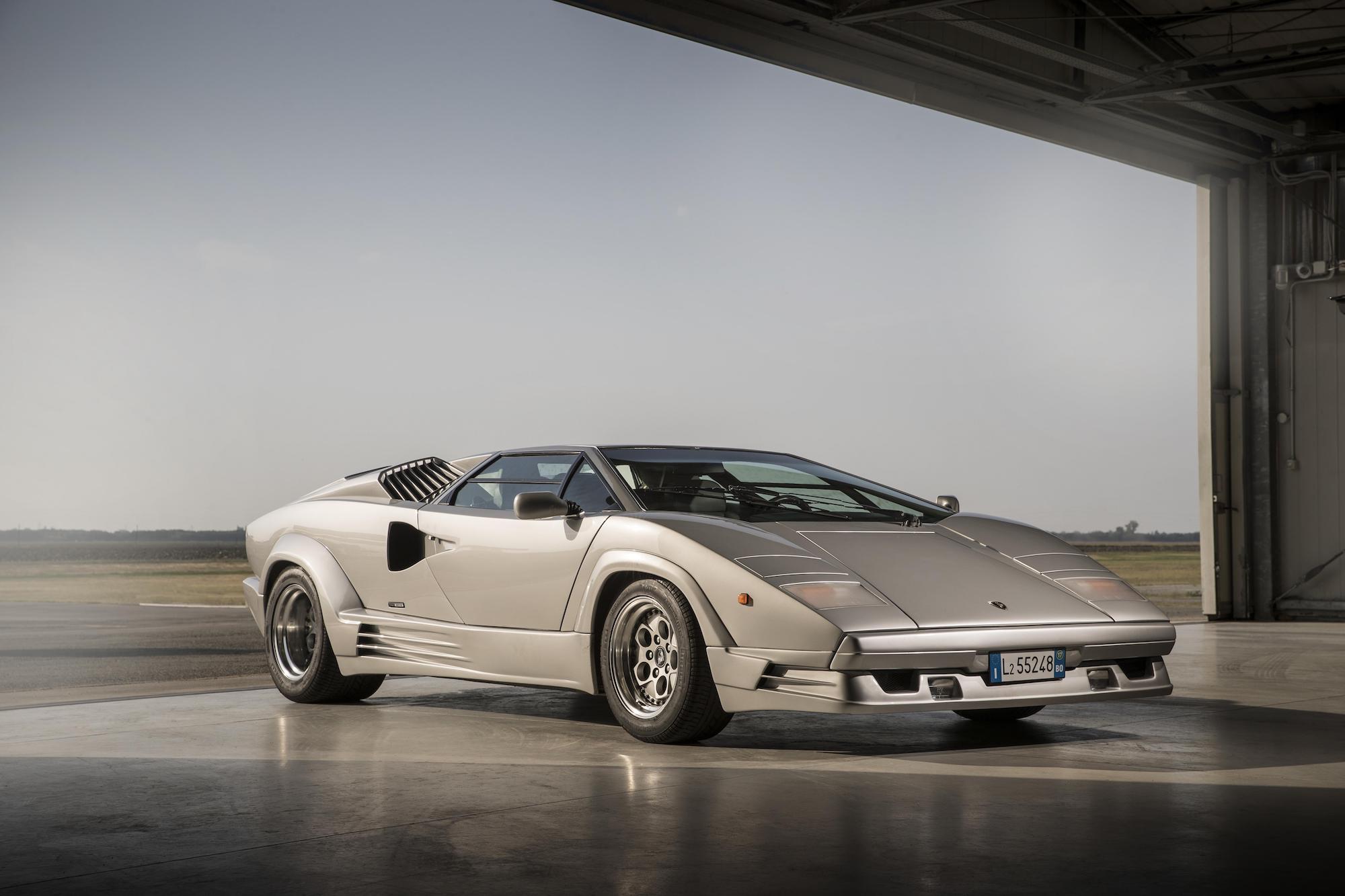 Many of the upgrades in the later models could be credited to Walter Wolf. The owner of Wolf F1 Racing purchased an LP400 in the 1970s but wasn’t satisfied with its engine (naturally), and so requested Gianpaolo Dallara, the chief engineer of Lamborghini at that time, to create a special high-power version of the Countach.

His “Walter Wolf Special” saw upgraded wheels, Pirelli P7 tyres, flared arches, and front and rear spoilers — features that would become integrated on future Countachs starting with the LP400 S. Ahead of its time, his car was later designated LP500 S even before the standard models from the ‘80s were launched, and became a stepping stone for Lamborghini’s development of these later models.

Then there’s what is easily the biggest badass of all Formula One safety cars. The sport has had many models over the decades — with Aston Martin taking over the baton now with the Vantage — but few have been as mesmerising as the Countach’s gig at the Monaco Grand Prix between 1980 and 1983.

When Lamborghini’s 25th anniversary rolled around in 1988, Horacio Pagani (yes, that Pagani) gave the car a serious facelift with over 500 changes made, not because the current one wasn’t any good but because he was simply, well, Pagani. Tasked with upgrading the icon just before parting ways with the firm in the early 1990s, he not only added bespoke wheel arch extensions, extended air intake ducts and a new rear engine cover design, but also increased torque and performance with a top speed of 298kph.

The 25th Anniversary Edition was the most refined and possibly the fastest edition of the Lamborghini Countach with a 0-100kph time of 4.7 seconds, and was produced until 1990 before the Diablo took over.

And so the Countach was more than just the daddy of pin-ups for adolescent boys or a rear-wheel-drive sports car for drivers. It helped Lamborghini survive the most difficult years of its history and propelled the name to its rockstar status today.

It went where no other car manufacturer dared to go, and most importantly, it embodied an era of boldness and innovation. It was the epitome of automobile greatness exactly 50 years ago, and dare we say it’ll continue to be for another 50 more.

Review: Here’s what to order at Tapas 24 Singapore

6 ways to rim a cocktail glass