Richard Heydarian is an Asia-based academic, columnist and author of “The Rise of Duterte: A Populist Revolt Against Elite Democracy” and the “The Indo-Pacific: Trump, China and the New Struggle for Global Mastery.”

Malaysia shocked the world, and itself, three years ago when voters ditched the conservative Barisan Nasional coalition that had governed the country for six decades, upending Southeast Asian politics.

Even more surreal was the fact that the opposition coalition, Pakatan Harapan, was led by no less than 92-year-old former Prime Minister Mahathir Mohamad, who had ruled Malaysia for 22 years before stepping down in 2003.

All of a sudden, Malaysia’s notoriously placid and cynical politics became exciting, even promising. In an age of authoritarian populism, the new government set about prosecuting the corrupt officials behind the 1Malaysia Development Berhad, or 1MDB, scandal, loosened restrictions on press freedom and stirred a vortex of resistance against what Mahathir memorably described as China’s “new colonialism.”

In less than two years, however, the Malaysian spring dissipated as the political establishment’s old guards successfully exploited divisions within the new ruling coalition to bring down the government. In a region infested with despots and demagogues, Malaysia’s forgotten revolution stands as one of the great tragedies of our times.

The relevance of the electoral tsunami in 2018 cannot be overstated. Long dominated by the doctrine of Bumiputera — a local word used to describe Malays and other indigenous peoples of Southeast Asia — that gave indigenous Muslim-majority Malays preferential access to privileged positions in key institutions, Malaysia is nevertheless a multiracial nation with large Christian Chinese and Hindu Indian minorities.

And while deeply conservative Islamist parties have pushed through a raft of religion-inspired legislation at both the state and federal levels over the years, decades of robust economic growth and the rise of an increasingly vocal middle class helped Malaysia to steadily nourish key elements of a pluralistic and democratic society.

After the Malay-dominated ruling party began to lose its grip around 2000, the rot set in after the 2008 and, more especially, 2013 elections, when the opposition leader and former Deputy Prime Minister Anwar Ibrahim won the popular vote and denied Barisan Nasional a parliamentary majority in its own right.

It was the billion-dollar 1MDB corruption scandal under the now-convicted former Prime Minister Najib Razak administration, and Malaysia’s growing reliance on China that finally ended Barisan Nasional’s grip on power.

Once in power, the Mahathir-led government wasted no time moving forward on three fronts. First, it oversaw the arrest and prosecution of Najib and his lieutenants. The speed and breadth of the anti-corruption investigations were not only unprecedented in Malaysia’s history but arguably across Southeast Asia, where crooks and despots rarely face justice. 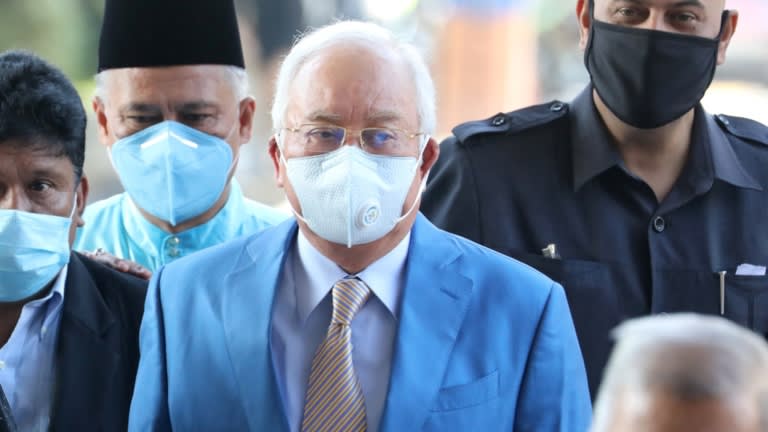 Second, the new administration oversaw an unexpected efflorescence of democracy by embracing growing press freedom and introducing a range of new legislative measures. New faces in the cabinet such as Sports Minister Syed Saddiq and Finance Minister Lim Guan Eng added to the government’s progressive edge.

The third major reform, however, had global implications. In a foreign policy reboot, Mahathir accused Beijing of peddling debt trap diplomacy through corruption-infested infrastructure investments that were overwhelming even middle-size and relatively developed countries such as Malaysia.

Accordingly, Mahathir called for a thorough review and, if necessary, cancellation of big-ticket Chinese infrastructure projects, while at the same time advising peers from Pakistan to the Philippines to be wary of predatory Chinese investments.

When I interviewed Mahathir in 2019, he went so far as to advise neighboring countries against “borrow[ing] huge sums of money” from China. “If you cannot pay your debt, you find yourself subservient to the lender.”

And to my astonishment, Mahathir also reiterated, in a subtle criticism of Philippine President Rodrigo Duterte’s scorched-earth drug war, the importance of the rule of law in any anti-crime initiative.

But there was more. Mahathir upped the ante in his final months in office by adopting a tougher stance toward China in the hotly disputed South China Sea.

As Malaysia forged ahead with unilateral energy exploration activities within its own waters, it faced constant harassment from Chinese vessels. And for his part, then Foreign Minister Saifuddin Abdullah openly dismissed Beijing’s expansive claims as “ridiculous,” even threatened legal arbitration to defend Malaysia’s claims if China did not back off.

Shortly before the COVID-19 pandemic kicked in, however, Malaysia’s democratic experiment collapsed as the aging but still domineering Mahathir wavered on his earlier commitment to pass the leadership baton to his allies, most especially Anwar, and failed to revive his country’s whimpering economy with contradictory economic policies. Finally, Mahathir lost control of his unruly coalition amid petty squabbles and partisan intrigue.

With royal backing, the Ancien Regime skillfully exploited the infighting within the reformist administration to engineer Mahathir’s downfall and, soon after, deployed tight pandemic controls to muzzle the opposition and consolidate power in what many critics see as nothing less than a political coup. It is doubtful if there will be a new round of elections anytime soon.

Recent history shows that Malaysia has all the ingredients to become a robust and vibrant democracy. But the tragic end of Mahathir’s New Malaysia also painfully underscores the indispensability of coalition unity, political savvy and mature leadership among democratic forces, especially in times of historic political transition and profound uncertainty.