What you can learn from the triangular theory of love

Since the dawn of time, people have been falling in and out of love.

Love, according to anthropologist Helen Fisher, PhD, is “life’s greatest gift” and a topic that poets, musicians, and artists of all sorts have been trying to define, explain, or at least rationalise — in most cases — to no avail. It’s an intoxicating, all-consuming feeling people have gone to jail for, given up thrones for, and done some other wacky stuff for — something that artist Oskar Kokoschka would gladly confirm if he were still alive today. (FYI, Kokoschka had a life-size doll made in the likeness of his former lover, the composer Alma Mahler — and by all accounts, he lived a happy life with the doll.) It’s something for which far too many people, not just fictional characters such as Romeo and Juliet, have died. Its effect on humans throughout history is undeniable, and for centuries, philosophers and psychologists alike have tried to unearth the “why” and “how” of love, each one with a different take on the matter — and the Triangular Theory of Love is no exception.

What Is Sternberg’s Triangular Theory of Love?

In 1986, psychologist Robert J. Sternberg, PhD, threw his hat into the ring of love hypotheses with this Triangular Theory of Love. According to the theory, love is based on three things: intimacy, passion, and commitment. If one of the three elements has a stronger hold on a relationship than the other elements, the relationship has less of a chance at succeeding.

Within these three elements are seven types of love that can be experienced in a relationship: 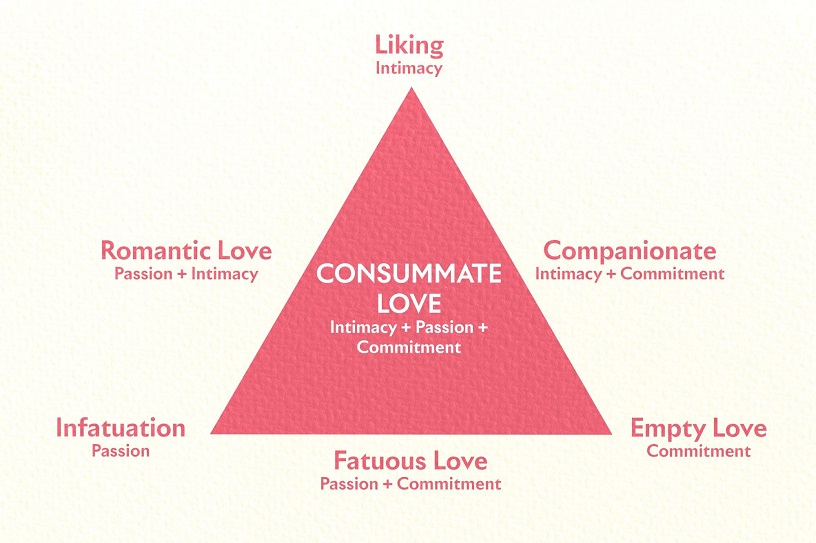 It’s true that Sternberg’s theory oversimplifies something as complex as love and relationships, but it does set up the initial groundwork for understanding how to navigate the best relationship you and your partner(s) can have.

“Romantic love in its purest form exists when all three corners of the triangle are present,” says Sameera Sullivan, a relationship expert who’s studied Sternberg’s work extensively. “Without passion and commitment, you get mere friendship. Without commitment and passion, you get a lustful version of love that is only physical. And without intimacy and passion, you get empty love, tied by only a marriage contract and sacrifices.”

Knowing the theory can help you understand the type of love you have, the type of love you want, and what of the elements will get you there. If you have a love that’s become one of just companionship and want to bring back the fire you and your partner once had, then it’s something you need to work on together. Passion may die, but it doesn’t mean it can’t be resurrected and with some effort.

Further, Sternberg’s concept of “consummate love” also stresses the importance of consistently expressing that love. “This element is key, as many people say they love a partner but do not show their love,” says Carla Marie Manly, PhD, a clinical psychologist and relationship expert, and author of Date Smart.

While the triangle itself names feelings within the relationship and not behaviours, these feelings need to be expressed to one’s partner in one way or another. No one is a mind reader, and behaviours ultimately end up becoming part of the theory, because expression of those feelings is necessary for them to actually be present. This notion of expressing love is not technically in the triangle, but something Sternberg previously addressed. “Even the greatest of loves can die” without it being expressed, he said in 1987. (And on that note, it helps to know your and your partner’s love languages, so you know exactly how to express it.)

The theory also provides helpful context to why much of the societal messaging around love isn’t actually true IRL. “So many of us are raised on fairy-tale versions of perfect love built on passion; when this illusion pops, many hearts are broken,” says Manly. “It’s clear that passion can only take you so far. When partners rely on physical attraction to keep a relationship alive, hurt and disappointment ultimately arise. Although passion is certainly an enticing element, it’s shared values, dedicated effort, and emotional investment that keeps relationships alive in the long term.”

How the Triangular Theory of Love Is Lacking

Although the triangle is used as a metaphor, it perpetuates Sternberg’s theory that once you remove one of the three corners, the other two collapse, or are at risk of collapsing. Which, to anyone who’s been in love or been in a relationship, might find a little dramatic or extreme.

“In working with my clients and in my personal life, I’ve found that Sternberg’s Triangular Theory of Love is relatively simplistic for real-life application given that romantic relationships are incredibly nuanced,” says Manly.

The thing with theories is that although they’re based on research, science, and studies, they’re still not deemed as fact. While Sternberg’s theory can be used by people to help them make sense of their relationship, it most certainly leaves some important things out.

“The theory diminishes many other necessary elements such as shared values, respect, healthy communication, and compassion,” says Manly. “Although some might argue that such critical elements are inherently part of commitment or intimacy, the complex world of relationships requires overt clarity.

But while there’s no debating that the Triangular Theory of Love insists that all three elements are a part of the equation and no element be forced to carry the weight on its own, it doesn’t get into details about how much of each element is necessary for the recipe to come out right — should they all be present equally, to form the equilateral triangle that’s often used to illustrate the concept? Or can a relationship have it’s own unique balance of the elements?

“Sternberg doesn’t specify the ratios in which these components must exist,” says Sullivan. “That’s up to the couple to decide, or it becomes clear as the relationship matures, as long as you’re following Dr Sternberg’s prescription.”

Basically, there’s no one way to love. If you and your partner(s) can find an even balance and meet up in the middle where all three elements are present and the type of loves you’re experiencing make sense for you, then true love does exist — because true love looks different to different people.

When Sternberg created the Triangular Theory of Love in 1986, Google wouldn’t launch for another 12 years, Top Gun was number one at the box office, cell phones were as big as your forearm, and dating apps decades away. It was a different time in every sense of the word. How people dated and experienced relationships and love wasn’t what it was now. There was no right-swiping to the next best thing on apps and, although open relationships and relationship anarchy have always existed, it wasn’t really something anyone admitted to or discussed. So, it might be safe to say that when Sternberg developed this theory, he probably only had conventional, two-person relationships in mind.

Despite these societal changes in relationships and dating, the theory has actually become more accepted over time.

In 1992, psychologists Michele Acker and Mark Davis put the theory to the test with a study of college students and found issues with how people love at different ages and at different stages of a relationship. Their takeaway was that, although love affects us all similarly in regard to the award system in our brain, how we each experience love is different, suggesting there could be multiple triangles. Other psychologists, like Tim Lomas, would also go on to challenge the theory, calling it “somewhat incomplete” in his 2018 analysis.

It wouldn’t be until 2020, when researchers from the University of Wroclaw in Poland conducted a 25-country, multi-cultural study of 11,000, that the cultural universality of Sternberg’s initial assessment of dynamics in relationships was finally supported. A study of such magnitude, of so many cultures and so many ways of loving in modern society, confirms that the theory does still hold true — even taking into consideration how different relationships are today as opposed to over 30 years ago. The researchers both confirmed the cultural universality of the theory, and “observed that levels of love components differ depending on relationship duration, following the dynamics suggested in the Triangular Theory of Love.”

If history tells us anything, it’s that Sternberg, his predecessors, and successors, are certainly not the only ones who will sit down and try to dissect love in hopes of discovering the magic something that answers all our relationship questions. To love and be loved isn’t easy, nor is maintaining a healthy and happy relationship, let alone a perfect one.

If the Triangular Theory of Love is used as a blueprint, as opposed to a textbook, it can help people learn what types of love can be experienced in relationships where intimacy, passion, and commitment are all present. It’s not a definitive guide to the perfect relationship or true love, because there’s no one way or right way for either scenario to exist. As soon as you learn that — or unlearn what fairy tales have taught you — you can work toward having the most human relationships and experiences in love as possible.

This story first appeared on www.shape.com

Shape and the Shape Logo are registered trademarks of Meredith Corporation. Used under License.

These 12 spectacular French castles are straight out of fairy tales

Meatless Monday: Where to find the best vegan burgers in Bangkok

Dreaming of an Hermes Christmas? Here are 8 brilliant gift ideas