Understanding the real impact of the ‘Nixon Shock’

Masaaki Shirakawa is a former governor of the Bank of Japan.

This month marked the 50th anniversary of the “Nixon Shock,” when U.S. President Richard Nixon decided to suspend the convertibility of foreign official holdings of dollar into gold, making now a worthwhile moment to look back on how it affected the global economy, ponder its historical importance and consider the challenges ahead.

By suspending the dollar’s convertibility into gold at a fixed price of $35 an ounce, and also imposing a surcharge on imports plus freezing wages and prices, Nixon precipitated the collapse of the postwar international monetary system known as the Bretton Woods agreement, leading to the start of the floating exchange rate system which has become norm ever since among the advanced economies.

The economic rationale behind Nixon’s decision was straightforward: With public finances in the U.S. deteriorating in the 1960s and 1970s, growing deficit on the balance of payments and a resulting gold flowing out of the country, the U.S. was approaching the point where it could not make good on its guarantee to convert its currency into gold.

While it can be said that this decision was inevitable, it still deserves to be remembered as a shock — it was a purely unilateral decision taken without consultation. “If historians search the precise date on which America’s singular dominance of the world’s economy ended, they might settle on August 15, 1971,” noted Jeffrey E. Garten, author of the recently published Three Days at Camp David: How a Secret Meeting in 1971 Transformed the Global Economy.

Today, it is impossible to imagine a unilateral decision of this scale and global importance being made by any single country. It is true that there were shades of American unilateralism in the famous international policy coordination at the height of the Plaza and Louvre accords signed in the mid-1980s, but not on the same scale.

But if we look specifically at the dollar itself, which was the very root of the problem in 1971, a different landscape has subsequently unfolded. The expected fall in the status of the dollar as an international key currency did not happen. 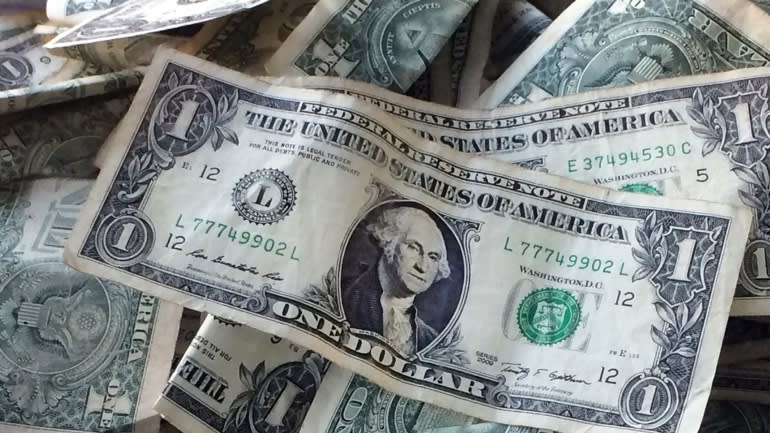 The expected fall in the status of the dollar as an international key currency did not happen.   © AP

The function of a specific currency as a global currency can be measured by how widely it is used in foreign trade, international debt issuance and major international payment systems, and the degree to which it features in official foreign reserves.

Looking at its global shares according to such measures, the dollar’s status as the international key currency is not on a downward trend. Rather, it seems to have increased over the past decade, despite a decline in America’s GDP share of the world economy.

As globalization progresses, demand for the dollar has steadily increased, satisfied by the growing current-account deficit and corresponding net capital inflows to the U.S. Under the Bretton Woods system, the growing demand for dollars was satisfied by the widening U.S. balance-of-payments deficit, which put a strain on U.S. gold reserves. This vulnerable situation came to be called Triffin’s dilemma, after the economist who identified it.

What we are seeing now can be called a modern version of Triffin’s dilemma. But a dilemma in what sense? The best way to answer this question is to think about whether the world is really able to enjoy the monetary policy freedom that was supposed to be enabled by a flexible exchange rate system.

According to the famous dictum of “open economy trilemma,” a country cannot enjoy the following three good things simultaneously: free capital movement, a fixed exchange rate and autonomous monetary policy. One has to be given up. Most advanced economies opted to pursue free capital movement and autonomous monetary policy by giving up fixed exchange rates.

But today, judging from the interest rate configurations in many countries, nations are seemingly not enjoying autonomous monetary policy, with interest rates either at or near zero in all advanced economies. Is this because each individual country, from the bottom of its heart, wanted to set its interest rate at zero?

That is probably true in the U.S., where the Federal Reserve believes zero interest rates are needed to regain policy room by ultimately increasing inflation expectations. How about the European Central Bank and the Bank of Japan? Do they really believe zero percent is the most desirable for their own economies? Or, to put it differently, are they enjoying fully autonomous monetary policy?

I guess the answer is yes and no. On the one hand, the thinking behind zero interest is the same for them as it is for the Fed. But on the other hand, given the Fed’s policy stance they do not have much choice. Their main concerns for Europe and Japan seem to be about the possible exchange rate appreciation of their own currencies in case they raise interest rates.

Ultimately, the influence of U.S. monetary policy has become stronger, not weaker. The choice for many countries — at least for advanced countries — is not a trilemma but a dilemma between free capital movement and autonomous monetary policy. Even in this case, we could imagine a situation in which losing monetary policy autonomy is justifiable, if the resulting global macroeconomic performance is reasonably satisfactory and if individual countries can benefit.

In this light, how should we assess global macroeconomic performance, and for that matter the collective performance of monetary policy, in recent decades?

Yes, there was a period called “the Great Moderation,” but it was followed by the global financial crisis. The straightforward implication of suspending gold convertibility is that our monetary system has become truly a fiat money system, which means human wisdom is the only anchor of a currency’s value.

Fifty years on, the broader truth is that we still have not found how best to control money. This is still a journey in progress.