TOKYO — British aircraft carrier HMS Queen Elizabeth has held its first drill with the Japanese Self-Defense Forces off the south of Okinawa, a demonstration of the Royal Navy’s increasing presence in the Indo-Pacific.

Japan’s Defense Ministry said Wednesday that the SDF conducted a drill with the British carrier strike group the previous day. U.S. and Dutch forces also participated, in a show of force intended to counter China’s growing military presence in the Pacific.

A key element of the drill was the deployment of U.S. and U.K. F-35B fighter jets, which can execute short takeoffs and vertical landings. Japan is purchasing these aircraft to bolster its defenses in the Nansei Islands. These islands — just a stone’s throw from Taiwan — have few runways long enough for more conventional fighter jets.

The workout closed with the allied ships sailing in formation — led by the Queen Elizabeth and flanked by Japanese Hyuda-class helicopter destroyer JS Ise and amphibious assault ship USS America. 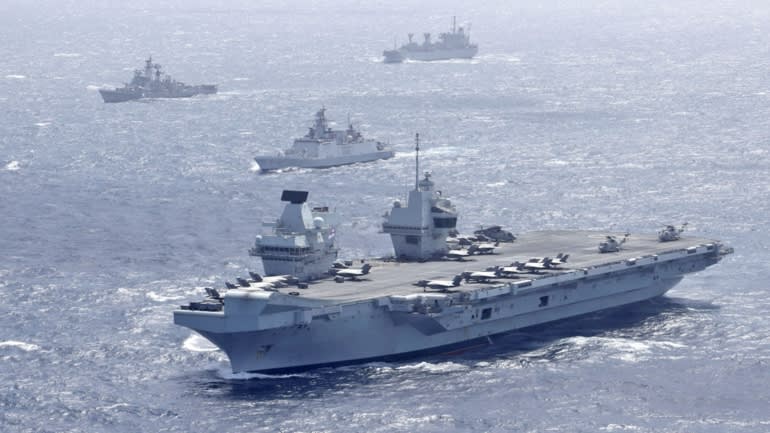 The HMS Queen Elizabeth is one of the U.K.’s most advanced aircraft carriers.   © Kyodo

“Conducting exercises with ships of the Japan Maritime Self-Defense Force and the U.S. Expeditionary Strike Group 7 is another milestone for HMS Queen Elizabeth,” said Capt. Angus Essenhigh, the commanding officer of the Queen Elizabeth. “We have shown our ability to work with our allies, and as we get accustomed to operating in the Indo-Pacific again, these relationships will be important for all future Royal Navy ships operating in the region.”

In a further display of cooperation, the Queen Elizabeth is expected to berth at the U.S. naval base in Yokosuka in Japan’s Kanagawa Prefecture next month. The base is home to 13 American warships including aircraft carrier USS Ronald Reagan.