A couple of years ago, before the pandemic became part of our lives, anything online was considered a gimmick, something to enhance “modernity”. Today, though, online events are unavoidable, so we Thais will, for the first time, observe and embrace the beginning of the Buddhist Lent online.

This year, due to the worsening COVID-19 situation, the Khao Phansa (the start of Buddhist Lent period) ceremony and related traditions including the Candle Festival are not “physical” but “virtual”. Ubon Ratchathani, the Northeastern province famous for the Candle Festival, has decided to host the popular provincial event entirely online to avoid transmission of virus during the celebrations.

The new wave of infections means that the procession of huge candle floats has been cancelled. But rather than do nothing, the provincial fathers decided to move Thung Si Mueang Park where the activities to take place to an online platform from July 22-28, 2021. In addition, other cultural components of the annual event including traditional dance and candle decoration as well as shopping will also be available online. “The province has joined forces with the Ubon Chamber of Commerce and Federation of Thai Industries, Ubon Ratchathani in organising the event online. The festival name Yon Thien Phansa”, which literally, means viewing and appreciating the Khao Phansa candles, very much reflects the nature of this year’s event,” said Ms. Kamonpron Khumnug, the director of the province’s Public Relations Office.

She told Thai PBS World that the content would cover more than just the festival because the private sector has helped create other interesting parts including the background of the festival candles, good standard restaurants and accommodation and quality local products. The province even shot videos of candle-float making at each participating temple to show during the event. 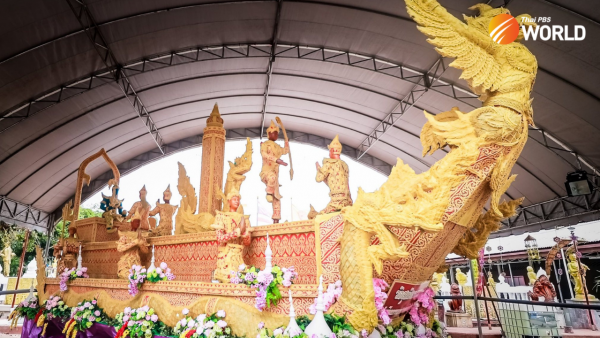 The festival held from 22-28 July is broadcast live on Facebook and other activities can also be viewed on the websites of the provincial’s media partners – Ubondaily.com and Guideubon.com.

“Even though it is online, everyone can participate, such as by pressing LIKE (as a form of vote) for the temple with a beautiful candle. The province will donate one baht for each ‘like’ to the temple and five baht for each ‘share’ (maximum 10,000 baht per temple), and the most popular temple would get a donation worth 30,000 baht from the organiser,” she said. 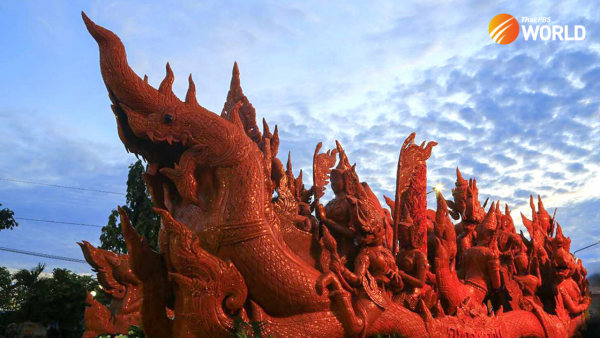 Participants can also bid for a beautiful Thien Phansa (candle) on Facebook, and in addition they can take a virtual tour of Ubon Ratchathani. “Tiew Tip (virtual travel) is the in thing and we also have two mascots Tien Tham and Tiien Hom to introduce attractions and local products,” said Kamonpron.

There will not be anyone on site this year but good thing about the online festival is that everyone can join – just sit back and enjoy the live broadcast. After all, by doing so, you can practice detachment, which is the core teaching of Buddhism. The largest annual event of Ubon Ratchathani province, the Candle Festival showcases the skills of Thai artists and artisans. The main event is the Candle Procession which takes place on the Khao Phansa day, the beginning of Buddhist Lent. Huge sculptures are carved out of beeswax candles and decorated according to beliefs from folklore, mythology, Buddhism and Hinduism. Giant candles are paraded through the city, each representing a local temple. There is a competition and exhibition of participating candles. The candles are taken to Thung Si Mueang on Asanha Bucha Day (one day before Khao Phansa) before the main parade next day. The event also features local delicacies and fun activities in the fashion of any Thai festival.

Nakhon Ratchasima locals get creative in complaining about road potholes