ANKARA — It is “too early” for Turkey to commit to recognizing a new Taliban-led government in Afghanistan, its foreign minister says, as Ankara rushes to evacuate its own citizens while urging greater European cooperation to avert a refugee crisis.

“I hope they will reach an understanding and there will be peaceful transition, and at the end they make a deal for the future of the country,” Mevlut Cavusoglu said Wednesday in an exclusive interview with Nikkei, noting reports of talks between the resurgent Taliban and figures including chief Afghan negotiator Abdullah Abdullah and former President Hamid Karzai.

“We must see the process,” Cavusoglu added.

Turkey is a key player in Afghanistan, having provided security for Kabul’s international airport for six years as part of the NATO mission in the Central Asian nation. The airport was the backdrop for harrowing scenes of Afghan citizens trying to escape the country this week as the Taliban swept back to power in the wake of a U.S. military withdrawal.

Cavusoglu denied media reports that Turkey had shelved plans to continue to protect at the airport and manage its military section.

“News that Turkey decided not to stay is not true,” the foreign minister said. “We have not made any decision yet.”

“There is a new situation and we must wait until they have formed a government — then we can talk to them. For now, we have other priorities like evacuating our citizens,” he added.

Turkey has the second-largest army in NATO and has historically maintained good relations with Afghanistan. As a major Muslim-majority country, it hopes the Taliban will agree to Turkey’s continued mission at the airport, the main gateway to the landlocked country as well as a lifeline for foreign embassies and international aid organizations.

Taliban officials have so far said all foreign forces participating in the NATO Afghanistan mission should leave the country, including Turkish troops. Turkey enjoys support from the local Uzbek and Tajik populations, which share common Turkic roots while the Taliban is mainly a Pashtun force. Cavusoglu has previously said that Turkey was in contact with the Taliban and that initial messages from militant group were “positive.”

Cavusoglu said he watched Tuesday’s “very interesting” Taliban news conference live. Asked about Taliban comments that no foreign troops were welcome, the foreign minister said Turkey had only “noncombatant troops” at the airport.

Turkish “troops’ role at the airport is very important for everybody, for Afghans and for third countries, for international organizations and for our citizens,” he said. 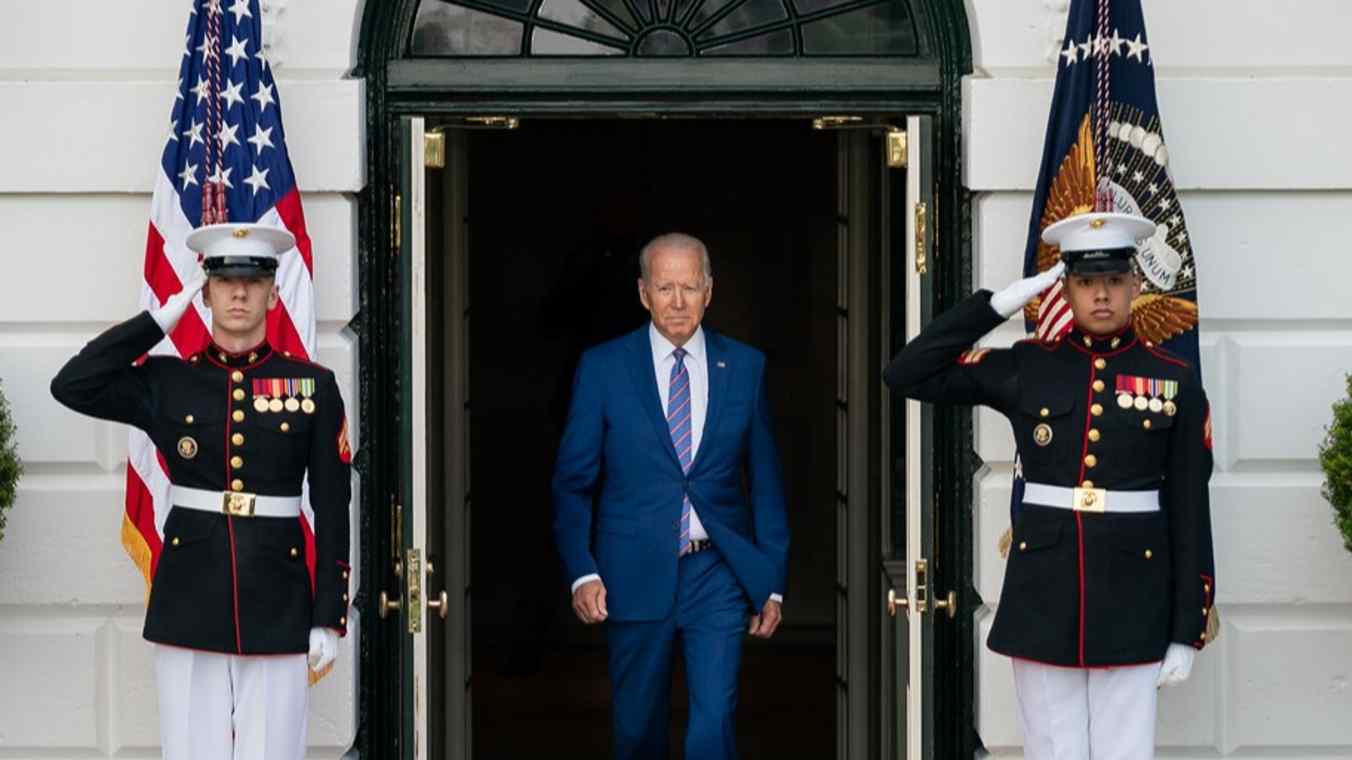 “At this moment, their presence is required for evacuation and for the security of the airport, where many civilians are at the civilian terminal,” Cavusoglu said when asked whether Turkey has plans to withdraw the troops.

According to a recent poll in Turkey by major pollster Metropoll, 62% of respondents think Turkish troops should withdraw from Afghanistan if U.S. forces are leaving.

Leading European Union members Germany and France, wary of a possible Afghan refugee influx, have stressed the importance of a solution that involves transit countries like Turkey. After talks with Germany’s Chancellor Angela Merkel and other European leaders this week, French President Emmanuel Macron said a new initiative was urgently needed to “fight against irregular flows, [achieve] solidarity in the effort, the harmonization of protection criteria, and the establishment of cooperation with transit and host countries like Pakistan, Iran and Turkey.”

Turkey and EU reached a comprehensive refugee agreement in 2016 after more than 1 million Syrians poured into the EU, mostly through Turkey. The agreement involved Turkey hosting most of the refugees in exchange for 6 billion euros ($7 billion at current rates) of financial assistance for their benefit. Turkey also sought additional demands, such as visa-free travel for Turkish citizens and updates to the Turkey-EU customs union agreement. Turkey said only the pledge of financial aid has been honored, and each side blames the other for the delay.

Asked on the possibility of signing a new deal with the EU, Cavusoglu said Ankara has been seeking a revision of the 2016 joint statement.

“This is a common challenge we need to work on together. Unfortunately, the EU still could not honor all of their obligations of that joint statement. Just asking Turkey to do something will not solve problem. Therefore, we need a broader cooperation with EU and other countries. Turkey cannot shoulder a new wave of refugees.”

Turkey extradited 37,000 irregular migrants during the first seven months of this year, 13,000 of whom were Afghanistan citizens.

“We will keep showing all the effort that we can to secure stability in the region, especially in Afghanistan,” Erdogan said.

Turkey has accelerated its efforts to complete a hundreds-of-kilometers-long wall with sensors and cameras at its border with Iran to stop migrant flows from the east.

“It seems more people will leave their countries for different reasons, obviously from Afghanistan and other places like Africa. After the coronavirus, many countries became vulnerable. These people will try to reach somewhere. Afghans and others are trying to reach Western destinations and Turkey is a transit country for them,” Cavusoglu said.

Asked about reports that Japan’s Embassy in Kabul is temporarily moving to Istanbul, Cavusoglu said “we will do our best to facilitate their mission activities,” adding “this is also a sign of friendship and trust between us.”

Cavusoglu will meet Japanese counterpart Toshimitsu Motegi on Thursday in Turkey during his Middle East tour.

Asean not as effective as hoped in Myanmar, Singapore foreign minister says