Heirloom Apples for the South

Heirloom Apples for the South

Manufacturers reeling from shortages of key components and higher raw material and energy costs are being forced into bidding wars to get space on vessels, pushing freight rates to records

A supply chain crunch that was meant to be temporary now looks like it will last well into next year as the surging delta variant upends factory production in Asia and disrupts shipping, posing more shocks to the world economy.

Manufacturers reeling from shortages of key components and higher raw material and energy costs are being forced into bidding wars to get space on vessels, pushing freight rates to records and prompting some exporters to raise prices or simply cancel shipments altogether.

Tse said the cost of magnets used in the puzzle toy have risen by about 50% since March, increasing the production cost by about 7%. “I don’t know if we can make money from Rubik’s Cubes because prices keep changing.”

China’s determination to stamp out Covid has meant even a small number of cases can cause major disruptions to trade. This month the government temporarily closed part of the world’s third-busiest container port at Ningbo for two weeks after a single dockworker was found to have the delta variant. Earlier this year, wharves in Shenzhen were idled after the discovery of a handful of coronavirus cases.

“Port congestion and a shortage of container shipping capacity may last into the fourth quarter or even mid-2022,” said Hsieh Huey-chuan, president of Taiwan-based Evergreen Marine Corp., the world’s seventh-biggest container liner, at an investor briefing on Aug. 20. “If the pandemic cannot be effectively contained, port congestion may become a new normal.”

The cost of sending a container from Asia to Europe is about 10 times higher than in May 2020, while the cost from Shanghai to Los Angeles has grown more than sixfold, according to the Drewry World Container Index. The global supply chain has become so fragile that a single, small accident “could easily have its effects compounded,” HSBC Holdings Plc. said in a note. 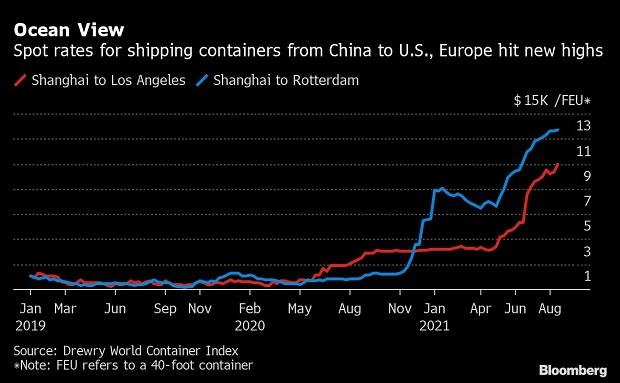 In the U.S., forecasters have lowered growth projections for this year and lifted inflation expectations into 2022, according to Bloomberg’s latest monthly survey of economists. Compared to a year earlier, the personal consumption expenditures price index is now expected to rise 4% in the third quarter and 4.1% in the fourth, double the Federal Reserve’s 2% goal.

“We are storing up critical components for one year of usage because if we miss one component, we cannot manufacture the products,” said Chan, chief executive of Town Ray Holdings Ltd., which gets 90% of sales from household brand names in Europe.

The spread of the delta variant, especially in Southeast Asia, is making it difficult for many factories to operate at all. In Vietnam, the world’s second-largest producer of footwear and clothing, the government has ordered manufacturers to allow workers to sleep in their factories to try to keep exports moving.

Even mighty Toyota Motor Corp. is affected. The automaker warned this month it will suspend output at 14 plants across Japan and slash production by 40% due to supply disruptions including chip shortages.

On the other side of the planet, companies in the U.K. are grappling with record low levels of stock and retail selling prices are rising at the fastest pace since November 2017.

Germany’s recovery is also under threat. A key measure of business confidence in Europe’s largest economy, released on Wednesday by the Munich-based Ifo institute. fell by more than economists had predicted with the drop blamed in part on shortages for metals, plastic products and semiconductors, among other goods.

It is hard to see supply chain bottlenecks being resolved any time soon, with some major exporters including Indonesia and Vietnam still struggling to contain the delta outbreak. It could continue to drag on the global recovery by slowing production and pushing up costs, although not derailing it.

At the heart of the price pressures is the transportation bottleneck.

Big retailers tend to have long-term contracts with container lines, but Asian production relies on networks of tens of thousands of small and medium-sized producers who often arrange shipping through logistics firms and freight forwarders. They in turn have been struggling to secure space for clients as vessel owners sell to the highest bidders.

Some 60% to 70% of shipping deals on the Asia-America route are done through spot or short-term deals, according to Michael Wang, an analyst at President Capital Management Corp. He said auction-style pricing may continue until Chinese New Year in February 2022.

Buyers agree. In Germany, more than half of the 3,000 firms polled by the Association of German Chambers of Industry and Commerce expected widespread supply-chain problems to persist into next year.

“Now container liners don’t sign long-term agreements, and most deals are done by spot prices,” said Jason Lo, CEO of Taiwanese gym equipment maker Johnson Health Tech Co. He said it was becoming impossible to estimate shipping costs and do financial planning, but “we have no choice.”

Colin Sung, general manager of Dongguan-based World-Beater International Logistics Co., said one client had more than 70 containers of goods sitting at a warehouse in Shenzhen because his American buyer didn’t want to pay the shipping cost. Sung said 60% to 70% of his clients have cut shipments due to rising costs. For Asian factories outside China, the problem is even worse. Many Chinese companies are willing to pay above-market rates to load their cargo, said a spokesman at HMM Co., South Korea’s biggest container line. So when the ships call at ports outside China, they’re already almost full.

Chinese companies that spent decades shifting production of lower-value components to cheaper labor markets in South and Southeast Asia now face the headache of trying to get those parts to factories where they can be assembled into finished products.

“We are talking about a lot of money just to move things around,” said Sunny Tan, executive vice president of Luen Thai International Group Ltd., which makes clothing and leather handbags for global brands.

As factories succumb to lock-downs, manufacturers are forced into a game of whac-a-mole, switching raw materials from one country to another. Some have resorted to air-freighting materials such as leather to factories to keep production lines rolling.

Meanwhile, Luen Thai’s Tan, who is also Deputy Chairman of the Federation of Hong Kong Industries, is trying to figure out how he’ll fill festive display windows in time for Christmas. “I wish when shoppers see our product they give it a kiss when they realize how difficult it was just to get it to the shelf.”

–With assistance from Kyunghee Park and Kevin Dharmawan.