Naly Pilorge is the director of the Cambodian League for the Promotion and Defense of Human Rights (LICADHO).

I have spent most of my adult life working on land rights in Cambodia, and I have never encountered a threat to land rights as pervasive and potentially catastrophic as the current microfinance crisis.

For more than 20 years, the human rights organization I lead has documented widespread and systematic land-grabbing in the country. These land grabs were mostly cases in which the state helped politically connected tycoons and foreign companies to rob hundreds of thousands of Cambodians of their land.

At the height of this crisis in 2008, we documented more than 16,000 households newly affected by land grabs in a single year. This wave of dispossession was recognized in an open letter to the International Criminal Court in March co-authored by the International Federation for Human Rights, Global Witness, and the Climate Counsel urging the prosecution of land grabbing crimes.

But now, amid the economic devastation wrought by the COVID-19 pandemic, I fear a different, larger and more hidden wave of dispossession. Most of all, I fear the $13 billion microloan sector, and the crushing debt burden that is threatening to rob the land and annihilate the livelihoods of millions of borrowers across the country, as highlighted in our report “Right to Relief

Cambodia has, by nearly any metric, the most overindebted microfinance sector in the world. By the end of 2020, the average microloan in Cambodia was nearly four times as large as the median annual income. There are more than 2.7 million microloans spread across Cambodia’s 4 million households, and most of these loans are collateralized with borrowers’ land titles, putting land ownership at risk.

While a legal mechanism for foreclosure exists here in Cambodia, numerous reports published by LICADHO have shown that it is rarely used. Instead, credit officers from microfinance institutions and banks prefer to pressure microloan borrowers who are late on repayments by threatening, browbeating and shaming them into selling their land to repay these debts, sometimes aided by intimidating and corrupt local authorities.

This means the inability to make microloan repayments can result in coerced land sales, robbing Cambodian families of their most precious asset. Even if a small percentage of loans result in such sales, it will irreparably harm hundreds of thousands of families.

And I am not convinced that it will be a small percentage of loans that end this way. While Cambodia was spared the worst health effects of the pandemic in 2020, the country’s economy was battered.

The largest employers — the garment, tourism and construction sectors — were hammered by sharp declines in demand. After the economy grew 7% annually for most of the last decade, in 2020 it shrank by 4%, leaving hundreds of thousands of Cambodians either unemployed or with lower incomes.

This year we faced our first large-scale domestic COVID outbreaks, forcing Phnom Penh into poorly managed rolling lockdowns and curfews. This has further hurt the country’s working classes, many of whom were already a single economic shock away from falling below the poverty line. 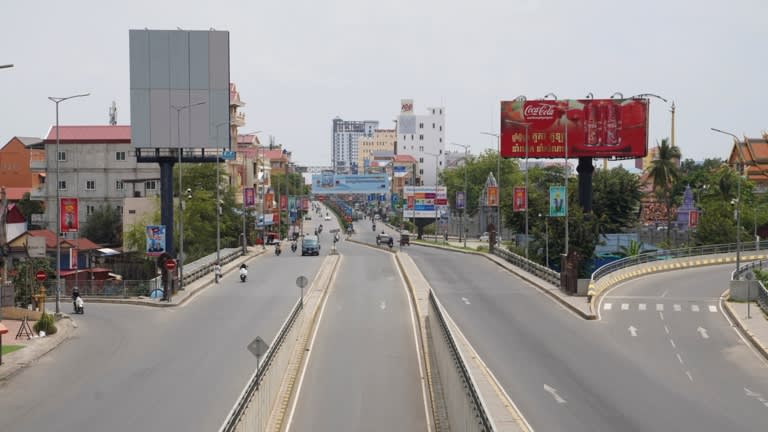 But despite these economic headwinds, Cambodia’s microloan sector has continued to rake in more cash than ever. The big nine banks and microfinance institutions, which together control about 90% of Cambodia’s microloan market, collected more interest in 2020 compared to the year before.

Eight of the nine posted record profits last year, baffling those of us who were seeing more and more borrowers struggling to repay their debts. While many Cambodians are drowning in debts they cannot afford, their creditors are swimming in cash.

Evidence suggests households are being pushed to take on more debt during the pandemic. A survey of households conducted by World Relief, DanChurchAid and People in Need in Phnom Penh’s red zone areas, which underwent the strictest lockdowns during the second quarter of 2021, found that many households took new, larger loans to cope with the economic stress.

In some districts of the capital, outstanding microloan debt grew by up to 30% — in other words, a year’s worth of rapid growth occurring over a single 12-week period, during which economic activity largely ground to a halt. Already overindebted Cambodians are losing their incomes and falling even further into debt.

It is catastrophic for everyone when a financial sector becomes untethered from the reality of borrowers. What is most frustrating about this crisis is that so many actors in the sector are pretending that it is not happening.

Unlike during Cambodia’s previous prolonged land-grabbing crisis, the major backers of these MFIs and banks include development agencies from Europe and the United States, as well as the World Bank’s International Finance Corporation. They can — and must — take action to ensure their investments do not violate borrowers’ human rights.

But so far, most investors have instead ignored reports of abuses, choosing to pump more money into Cambodia’s microloan providers during the pandemic. They have injected hundreds of millions of dollars in new money — all documented in the IFC’s project and information data portal — since the start of the pandemic, with no new investigations, protection or redress for suffering borrowers, fueling a predatory sector already growing faster than it should.

Cases of coerced land sales, child labor and even debt-driven suicides were documented prior to the pandemic, but they are becoming increasingly frequent as the economic situation deteriorates. And we are far from over the worst of this crisis.

I am increasingly afraid of the devastating effects of Cambodia’s microloan sector. I hope that those with the power to do so act before it is too late.