BANGKOK — Wanchalerm Noomuean yearns for the days he was known in Phuket as tour guide Jimmy, and every month showed hundreds of international visitors around the famous Thai island.

COVID-19 wiped out the 31-year-old’s job 15 months ago. While Jimmy remained in Phuket and the Thai government from July started allowing into the island inoculated international visitors, the number is tiny and there is no demand for tour guides. The outlook for Jimmy getting back a job he loved isn’t good.

“I forgot how to speak English already,” he said, smiling wanly. To pay his bills, Jimmy sold off some jewelry and a car. He ekes out an income by occasionally cooking and selling pad thai noodles at the garage of a tenement he rents.

Jimmy is part of Thailand’s growing ranks of unemployed or barely employed, though he wouldn’t be counted in the official statistics on the jobless total because Thailand — using International Labor Organization guidelines — doesn’t consider as unemployed a person who works at least one hour a week.

Also, more than half of the roughly 38 million in the Thai workforce, are in the informal sector and aren’t included in jobless data. These factors help keep Thailand’s official unemployment rate low — seemingly unproblematic — compared with regional peers and developed countries. 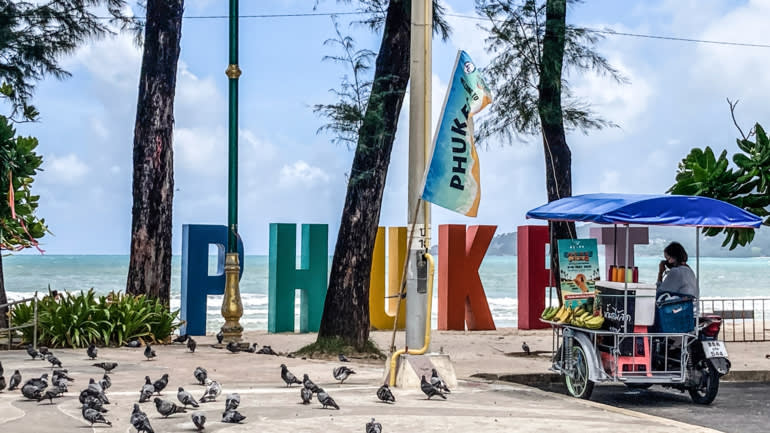 Although Thailand in July begin to let inoculated foreign tourists into Phuket, the number arriving is small and business remains poor.   © AP

But the low Thai unemployment rate masks a number of problems impacting the country’s workforce, which has been badly hurt by COVID-19, and could create political headaches for the government, which is struggling to contain the raging coronavirus.

The latest published Thai unemployment rate, covering 2021’s first quarter and announced in May, was 1.96%, a 12-year high. Danucha Pichayanan, secretary-general of the national economic planning agency, known as NESDC, described that rate was “drastically” higher than previous levels. (The rate was 1.03% in the first three months of 2020, when COVID-19 began to hammer the world, and 1.86% for the last quarter of 2020.)

Danucha said the Thai rate is “expected to rise again,” and that is a certainty, given how COVID-19 case numbers (and deaths) have shot up in Thailand since May, with outbreaks of the delta variant. Daily confirmed cases reached 15,000 on average in the past few weeks.

Even if the unemployment figure remained low by world standards, it’s a worry.

“For us, 2% unemployment rate is a crisis,” said Tanit Sorat, vice chairman at the Employers’ Confederation of Thai Trade and Industry (ECOTHAI). 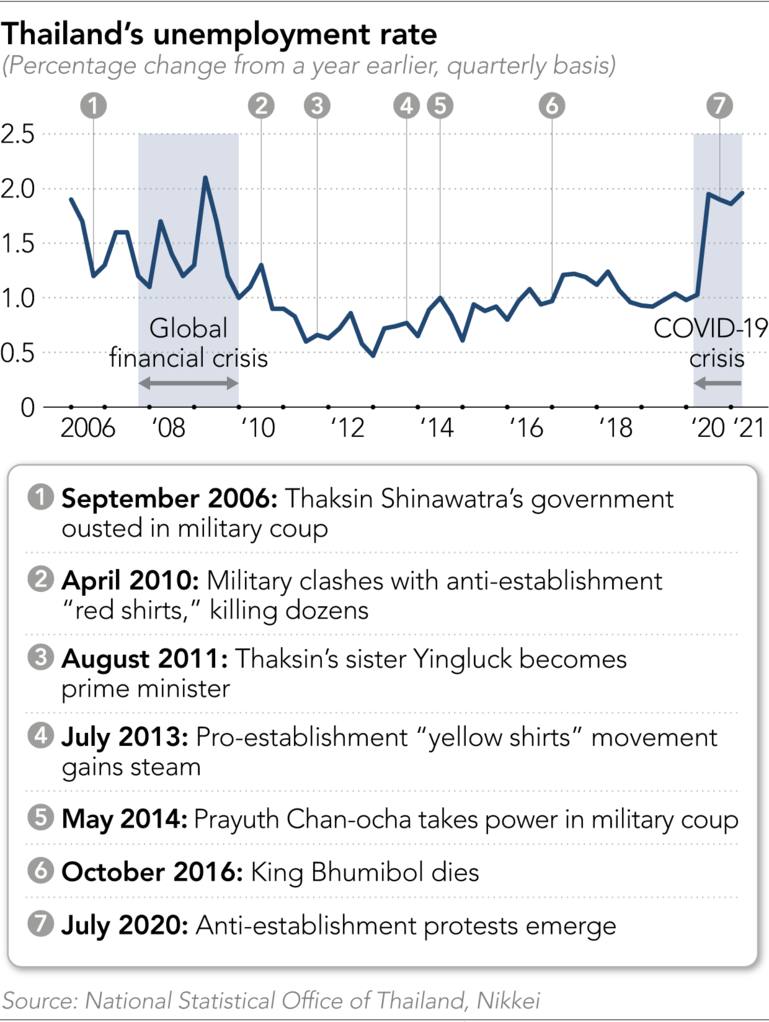 According to data from a telecom operator data, 1.6 million people moved out from big cities and popular tourism areas and relocated to their hometown between December 2019 and April 2021.

Traditionally, going back to rural areas has been a safety valve for when jobs in Bangkok and other cities have been lost. “Being able to easily enter agricultural sector and other self-employed jobs helps to quickly absorb unemployed labor form other economic sectors,” said the Bank of Thailand in its response to Nikkei Asia’s written query.

But the number leaving urban areas in the time of COVID-19 woes has been too large to comfortably handle. “The inflow of people is too overwhelming for the rural areas to absorb,” said Piyabutr Cholvjarn, president of Kenan Foundation Asia, a nonprofit community development organization.

COVID-19 has exposed how Thailand had become over-reliant on tourism, which has accounted for about 12% of gross domestic product, for creating jobs and economic growth

An example of the people moving away from tourist spots because of complete loss of business is Rodjana Kachachai, who had operated a T-shirt shop at Bangkok’s Chatuchak weekend market. “My shop depended a lot on foreign clients. Now I cannot earn a single penny from selling T-shirts,” said the 47-year-old. 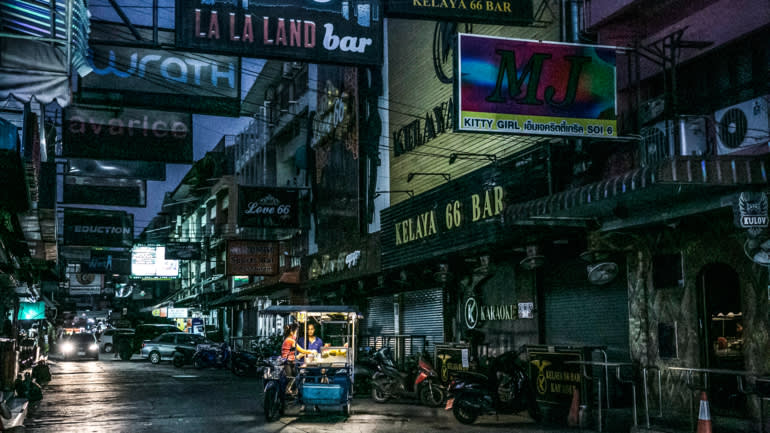 With hundreds of bars shut, Pattaya has changed from party town to ghost town.   © Getty Images

Another economic victim of COVID-19 is Nithi, a cocktail waitress at Bar Beer, a Thai-style open-air pub, in the beach town of Pattaya on the Gulf of Thailand. The government saw bars as hotbeds of coronavirus infection, and ordered them to close every time the country faced a rise in cases. Pattaya has gone from party town to ghost town.

“Every pub had several girls to entertain customers, but they all vanished,” said the 28-year-old Nithi, who declined to give her last name. She said she gets some income from on-selling goods bought on internet shopping sites, but adds that she gets financial support from a British boyfriend.

Prime Minister Prayuth Chan-ocha’s government, which has been criticized for its response to COVID-19, has provided some aid to those hit hard by the pandemic. This has mainly entailed short-term measures such as cash payments and soft loan facilities for small and medium-sized enterprises.

People in the informal sector were given 5,000 baht ($150) per month from April to June, 2020. Taxi drivers, taxi motorcyclists, and street vendors, who have small earnings, were given 3,500 baht for January and February 2021 in another program. They had to go through a complicated process to apply for the programs. Payments were often delayed. Rodjana said she received “very little” support money, “but better than nothing.”

On top of short-term issues faced by the unemployed, there are also long-term ones that existed well before the pandemic brought hardship for many people.

Among the issues not tackled by a series of Thai governments are improving laws for protecting workers and revamping Thailand’s education system, which is not teaching the skills workers will need in the digital economy that’s being rapidly expanded in the wake of COVID-19. These are long-term problems, and recent Thai governments — some set up after military coups — have often focused on short-term issues such as remaining in power. 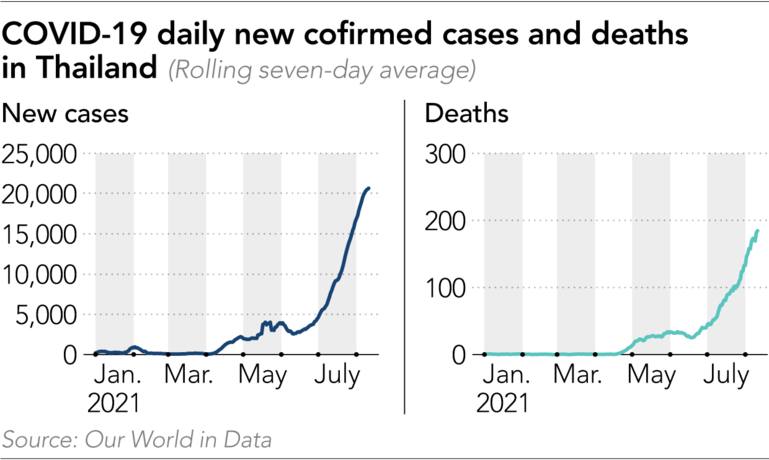 The Bank of Thailand warned that the pandemic might blunt workers’ skills. “The COVID-19 will affect work format in the future, and will require labor with new and diverse skills,” the central bank said.

Some skilled workers were forced to engage in low-productivity jobs, which may not be in line with their original skills. There is also a tendency for fresh college graduate to stay without jobs for a longer period of time, risking their skills and education to go outdated.

Meanwhile, wealth inequality only grew in the kingdom amid the COVID-19 crisis. The World Bank estimated that 7.4% of Thailand’s population lived on less than $5.50 a day in 2020, an increase of 1.2 percentage points from the previous year. According to a report from Forbes in July, the aggregated assets of the kingdom’s 50 richest families rose by more than 20% to $160 billion since such wealth was last measured 15 months earlier.

The total cases found in the country since the dawn of the pandemic doubled in July. The government once again had to implement lockdown measures and a nighttime curfew in affected provinces including Bangkok, causing more businesses to close permanently. The measures were extended until the end of August. 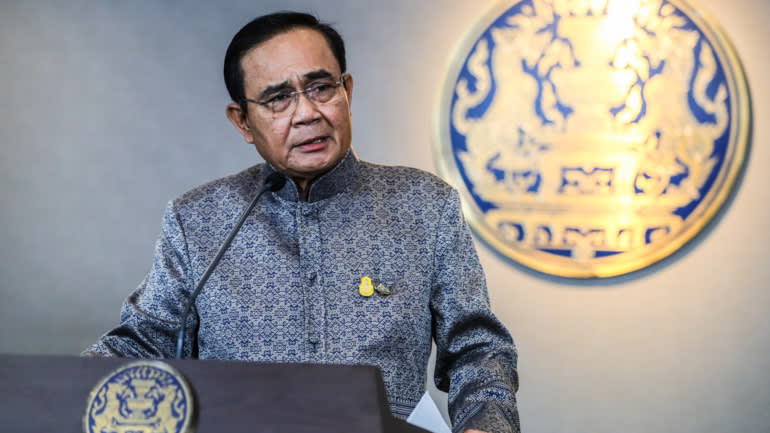 Under Prime Minister Prayuth Chan-ocha’s initiative, Southeast Asia’s second largest economy seeks to fully reopen its borders to vaccinated international visitors from October in order to revive tourism and related businesses. But delay in containing the third wave would adversely affect foreigners’ appetite to visit the kingdom. All of these are risk factors that could further drive up the unemployment rate.

If that happens, that could affect political developments. Yongyuth of TDRI says that in the past few decades, major crises involving labor have “tended to be followed by changes of government.”

If many more jobs are lost, that could cause young people without prospects to go back in the streets, as they did in parts of 2019 and 2020 in a youth-led anti-establishment movement that called for Prayuth, the longest serving prime minister since the 1980s, to step down. The movement was subdued after measures were taken to silence it, such as use of the lese majeste law. But more people, and industry groups have openly criticized Prayuth administration’s handling of the COVID-19 and economic situation. Rallies are gradually gathering steam again.

“I don’t think lives of ordinary Thais improved in the seven years since the 2014 coup,” said a job seeker nicknamed Ida. She has not been able to secure a stable job since graduating from college in 2019. Last week, resentment with the status quo drove the 25-year-old to attend her first anti-establishment rally calling for Prayuth’s resignation. “We will not wait for two more years,” said Ida. “But if we have to, I think Thais know what to do in the 2023 general elections.”

Offices from Netflix shows to inspire your workspace during WFH