BANGKOK — In recent weeks, hard-core protesters have been clashing with riot police on an almost daily basis under an overpass at Din Daeng, a major intersection area 10 minutes north of central Bangkok.

Political agitation resumed in June, and the violence has mounted steadily with fireworks and other small explosive devices being thrown at police lines. The police have responded with water cannons and tear gas, and the disorder appears to be deepening.

Mostly young people took to the streets after the Constitutional Court ordered the dissolution of the Future Forward Party, an opposition party with strong youth support, in February 2020. The student-led protests condemned the government, the military, the often compliant judiciary, the military-drafted constitution and the monarchy for undermining democracy.

In addition to demanding Prayuth’s resignation and constitutional reform, the protesters shattered the old taboo against criticism of the royal family.

The government reinstated use of the law of lese-majeste late last year, and multiple charges were brought against key student leaders, whose bail applications were denied for months. The detentions combined with anti-COVID-19 measures took the wind out of the protests for some months around the New Year.

But this year’s lockdowns have failed to contain the spread of infections, and public distrust in the government has mounted because of its failure to secure sufficient vaccines. The increase in infections has fueled protests and changed the demographics with the involvement of more radical and violent elements.

One of the most significant changes is the reemergence of the United Front for Democracy against Dictatorship (UDD), a civilian group that backs Thaksin Shinawatra, the prime minister deposed in a coup in 2006. Thaksin’s supporters, collectively known as Red Shirts, have historically pitted themselves against the Yellow Shirts, which support the traditional establishment, especially the monarchy.

Particular attention has been given to the resurfacing of Nattawut Saikua, 46, the UDD’s secretary general. After three years of seclusion, he has announced a campaign to oust Prayuth. In the beginning and middle of August, he and other UDD leaders led fleets of cars and motorcycles blaring horns through Bangkok in protest against the government. The UDD was formed after Thaksin’s overthrow in 2006. One of its early acts of defiance was a march on the home of Prem Tinsulanonda, a former prime minister. The UDD believed that as president of the Privy Council, Prem had masterminded the coup against Thaksin. Prem, also a former army chief who wielded enormous influence in military circles, died in 2019.

Thaksin’s disbanded Thai Rak Thai party was reconstituted as the People’s Power Party, which won the 2007 general election under a new constitution. Thaksin’s proxy prime minister, Samak Sundaravej, and his successor, Somchai Wongsawat (a brother in law of Thaksin), were both removed after short terms by court orders. After various judicial and military interventions, they were replaced in December 2008 by Abhisit Vejjajiva, who headed a coalition led by his Democrat Party until August 2011.

The UDD claimed the Abhisit government stole power “undemocratically,” and became increasingly militant. The Red Shirts, some of them armed, occupied much of central Bangkok, reprising Yellow Shirt occupations of Government House, Suvarnabhumi International Airport and other parts of the capital on Samak’s and Somchai’s watches in 2008 by the People’s Alliance for Democracy, led by Sondhi Limthongkul. 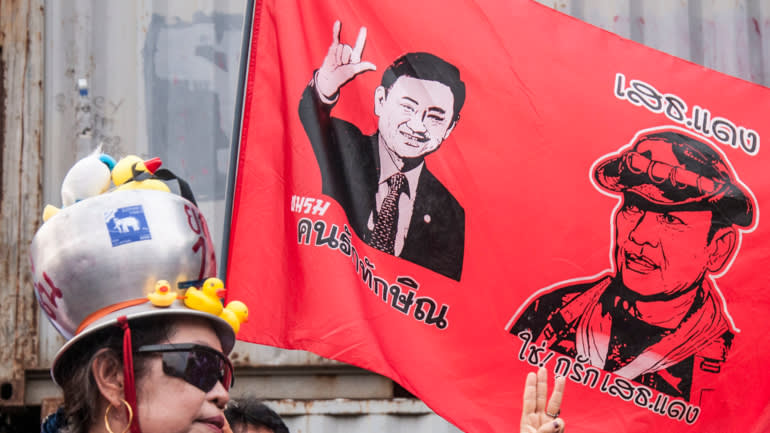 Portraits of former Prime Minister Thaksin Shinawatra have been seen at recent protests in Bangkok as supporters raise his profile.    © Getty Images

In May 2010, troops were sent in to end the Red Shirt occupation of major parts the capital, and over 90 people were killed in the violence. Nattawut had spearheaded the pro-Thaksin movement, both on the streets with the UDD and in parliament as a member of the lower house, but as chaos descended at the end he called for the abandonment of the demonstration on May 19.

UDD activities wound down after the 2014 coup that ousted what remained of Yingluck’s caretaker government, and Nattawut was imprisoned for alleged offenses committed outside Prem’s home in 2007. He was pardoned and released from prison at the end of 2020.

Nattawut has returned to political life citing the Prayuth government’s failure to contain COVID-19 as a reason. His reappearance locks step with Thaksin’s recent moves — although Nattawut denies it. The former prime minister, who remains in exile because of corruption convictions in absentia against him, has recently stepped up his social media activities. In mid-July, he caught major attention after pledging on the Clubhouse social audio app to return to Thailand at any cost.

Anti-government protests have been led by students in recent years. Will the protests gather steam if experienced members of the UDD join them? It is fair to say that students and UDD members are “strange fellows in the same bed.”

Nattawut has been tested by fire, and would never be naive enough to imagine Prayuth and his government could be unseated by honking motor horns. The road demonstrations may in fact be more of a signal relating to the next general election, which will be held in March 2023 at the latest — only 19 months away.

Thaksin supporters want to lure votes to the Pheu Thai Party, building on the former premier’s popularity and financial expertise, and mobilizing the UDD’s organizational skills. Nattawut will himself be unable to run due to his ban from politics, but he can still mobilize public attention and amplify Thaksin’s words and deeds to use the UDD as a vote generator for Pheu Thai.

There is much to ponder. How are pro-Thaksin parliamentarians likely to proceed? Will Pheu Thai, which cooperated with the Future Forward in the March 2019 election, work with the Move Forward Party that replaced Future Forward after it was disbanded by court order? Future Forward, the party led by Thanathorn Juangroongruangkit, was disbanded by court order in early 2020, and replaced by the Move Forward Party. (Photo by Akira Kodaka)

Thai politics can breed strange alliances in which “oil and water” mix. There is even a possibility that Pheu Thai might link up with the Palang Pracharath Party, the main party in Prayuth’s coalition, according to Satithon Thananithichot, director of the Innovation for Democracy Office at the King Prajadhipok Institute. “If many more people become infected and die from COVID-19, it could force the prime minister to resign,” Satithon said. “Then Palang Pracharath could team up with Pheu Thai to set up a new government.”

At present, reform of the election system is being deliberated in parliament. If the two largest parties agreed to reduce the number of seats allocated to politicians on party lists by proportional representation, and to increase the number of single seat constituencies contested, the change would be a blow to Move Forward. It is the only major party to have more seats allocated by proportional representation than by constituencies.

A no-confidence motion submitted by opposition parties on Aug. 16 does not apply to Deputy Prime Minister Prawit Wongsuwan, the head of Palang Pracharath, and Deputy Minister for Agriculture and Cooperatives Thamanat Prompow, the party’s controversial secretary general.

Move Forward demanded the pair’s inclusion but Pheu Thai rejected the call, according to local media. Some interpreted that as a possible sign of collaboration between Pheu Thai and Palang Pracharath.

But what would Pheu Thai gain from dumping Move Forward and linking up with Palang Pracharath, its adversary? A much better chance of getting close to power would be one obvious answer.

Under the existing constitution, Thailand’s prime minister is chosen by a majority of the 500 elected members of the House of Representatives combined with 250 military-appointed members of the Senate. Assuming no support from the Senate, the pro-Thaksin group would need to secure over 75% of the lower house to install a prime minister from its own ranks — a virtual impossibility.

In order to enter the cabinet, Pheu Thai would have to set aside its resentment toward Palang Pracharath to form a ruling coalition, secure ministries and perhaps achieve a degree of political stability.

Why might Palang Pracharath involve itself in such a counterintuitive maneuver? The main government party has been struggling with the current fractious and unwieldy 20-party coalition, so a grand coalition between the Pheu Thai and Palang Pracharath might fly under a “national unity” banner for post-pandemic economic rehabilitation.

The monarchy could also be a factor. While not uncritical of the institution, Pheu Thai has been silent on the question of actual reform. When asked about youth demands for reform of the monarchy under the constitution, Nattawut has so far played coy, merely saying that society should listen to the opinions of young people.

A pardon from King Maha Vajiralongkorn wipes away lese-majeste charges and facilitate releases from prison. An unconditional pardon would also provide a route home for Thaksin. There is no upside for Pheu Thai — which is overall the largest party in parliament — to endorse street protests by being openly critical of the monarchy — nor to being stuck ineffectually in the opposition with Move Forward, which has backed them.

It would be a major reversal of history if the gap between pro- and anti-Thaksin forces that has endured 15 years suddenly closed because of youth calls for reform of the monarchy, but such a development would shine a light on the unprincipled, transactional nature of Thai politics.

Many young people would react badly to such a marriage of convenience, but their idealistic demands on the streets have failed to dent the parliamentary gridlock the military has created. Post-pandemic, Thai society will fall into an even deeper abyss if it cannot unlock its generational and ideological differences peacefully.