Take your vegetables, fruit, seafood, and meat on an acid trip 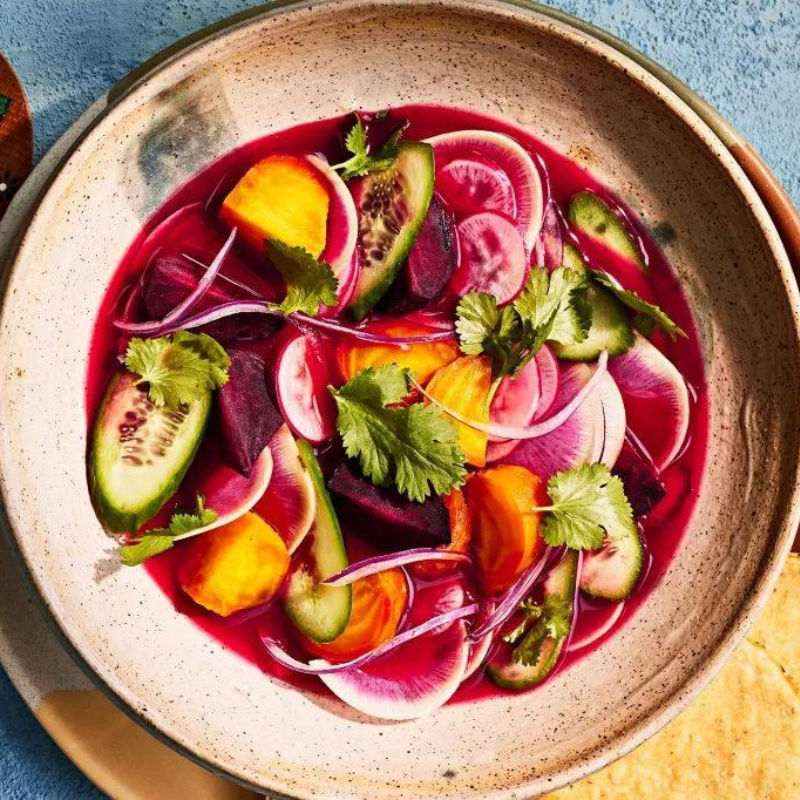 I can viscerally remember the first aguachile that I ate. Let me set the scene. There I am, in Tijuana, crawling age, clinging to the edges of the coffee table as I wobble toward my dad’s botana (snack): an aguachile of dried shrimp soaked in his concoction of lime juice, habanero, and sea salt, garnished with cucumbers and julienned red onion. From my father, I inherited my hunger for flavours so exciting that they make me dance. He also happens to be the source of my dark sense of humour, and as I advanced on the dish, he didn’t pull it away. I snuck a shrimp.

It was an introduction to acid and salt like I had never experienced. I proceeded to cry and pull on my pigtails “as if they were on fire!” my mother recalls, laughing so hard tears fill her eyes. Two minutes later, I rebounded and went back for more. A craving for the big flavours of aguachiles became a recurring memory throughout my youth and a huge part of my career as a chef (minus the pigtails).

Aguachile translates to “chilli water.” The dish originally comes from Sinaloa’s Sierra Madre Occidental mountains, where ranching was the local trade, and was made with machaca (dried beef floss) that was rehydrated in water and given a kick by tiny, round, potent wild chiltepin chillis. Like every dish across the globe, aguachiles migrated, heading to other parts of Mexico and beyond. In Tijuana, where I spent most of my time growing up, aguachiles consist of shrimp barely dressed in a lime sauce with chiltepins, always garnished with red onions, sea salt, and cucumber slices.

I started experimenting with aguachiles in 2015 at chef Javier Plascencia’s celebrated restaurant Bracero Cocina de Raíz in San Diego. Cocina de raíz means “kitchen from our roots,” but we were expected to think outside the parameters of the cooking we had been taught or had grown up with. That’s where I started to approach cooking as a conversation between the ingredients and myself. And that’s where I first started experimenting with aguachiles—I came up with a version that used thinly shaved carrot as the star. Anything can be an aguachile if you take creative freedom with it.

To honour the roots of the dish, I always stay true to the basic tenets of aguachile—the fundamentals of salt, acid, heat, and a little bit of sugar. The acid might come from lime, lemon, or orange. The heat might be from chiltepin, habanero, or serrano chillis. Salinity I might draw from sea salt, soy, or miso. And there must be a star of the dish, which might be tender scallops, or rib eye, or beets. I always think about which components contain sweetness, such as the natural sweetness of shrimp or scallops. Sweetness is key to the dish’s addictive quality; it helps balance the fiery sensation that the capsaicin in the chillis creates, and it keeps you going back for more. There should also be cooling elements, like cucumbers, young coconut meat, or cilantro. It’s important to use the best ingredients. If you don’t have good ingredients, you can’t understand the potential of the flavours locked inside them. Dried chillis, for instance, should not crack in your hand; they should have a leathery, chewy, almost candied texture, like fruit leather.

The more I understood each ingredient’s job, the more my creativity soared. When I go into the walk-in and look at the ingredients, I think: What has juice in it? What has water in it? What’s the sugar content? If an ingredient is sweet, like a carrot, I need to balance it with acidity, salt, and heat. If I want to do a green aguachile with zucchini and chard, which are full of chlorophyll, I think about what else those ingredients need so that the result won’t taste like taking a bite out of a farmers-market box. Once I have the flavours down, I might look to add crunch; I look for ways to balance textures and temperature. The heat in aguachiles comes only from the chilli, like chiltepin or pasilla Mixe, which also has a smoky flavour. Oh, we’ve got a new player now—we have smoke coming in! It’s really like composing a song.

I hope these aguachiles inspire you to experiment. I also hope they help show you that Mexico is not exactly what you think it is. Mexico is not even what I think it is. There aren’t enough words in the dictionary to define a country that has seen so much ugliness throughout its history and has resulted in so much beauty on the table. Our food is sacred to us, and we take so much pride in it. It embodies the mysticism of millennia, of people and plants and animals working in perfect harmony. The chilli in aguachile shouldn’t hurt. It shouldn’t cause you indigestion. To us, habaneros are fruity and sweet with floral notes. They’re hot, yes. But they have been selectively bred to be hotter. They aren’t naturally so hot. If you have habaneros in the Yucatán, they’re green and they’re delicious and they have spice, but they’re more floral than spicy. I want to teach people to befriend chillis and to befriend fruits and vegetables and to think of their potential outside of cooking them until they’re unrecognisable.?

I live in a huge world with a big pantry. In northern Mexico, Chinese, Japanese, and Korean ingredients are at our disposal because people from those countries were in Tijuana. Mexico is a complex melting pot of people, where the story stops being about why we’re so different and starts being about why we’re so similar. Chinese labourers built the city of Tijuana; Japanese immigrants established the entire seafood industry in Ensenada. These are the stories that inspire me and give me permission to work with ponzu or to work with kombu.?

In the recipes here, I share a few more ideas to get your curiosity going. Each illustrates the versatility of aguachiles, and whichever one you choose, I guarantee you will land on some of the best, boldest, and most exciting flavours you didn’t know were possible. Provecho!

Coconut water, celery, ginger, and chillis come together to flavour the base of this delicate aguachile, while toppings of pineapple, cucumber, and avocado help cool it down. Zepeda makes homemade coconut chips by shaving and toasting fresh coconut, but we’ve substituted readily available store-bought coconut chips.

Thin strips of carrot and cucumber, salty smoked roe, and roasted cashews give this aguachile deep layers of flavour and complex textures. For a vegan alternative, replace the trout roe with 1 bunch of roasted or grilled carrots.

In this satisfying aguachile, slices of steak in ponzu sauce are topped with fresh tomatillos, onion, cucumber, and a cilantro salad that balances the meat’s richness. If you can’t find a precut 28-ounce rib eye, ask your butcher to cut one.

The purple beet juice broth for this aguachile is bright and a little spicy, with funkiness from black garlic and balancing sweetness from fresh orange juice.

Cooking strawberries in a double boiler gently releases their sweetness, creating a juice with vibrant colour and flavour. When mixed with scallions, cucumber, anise-scented hoja santa, and citrus juices, it creates the perfect base for a strawberry and radish aguachile.

This story first appeared on www.foodandwine.com

The post Take your vegetables, fruit, seafood, and meat on an acid trip appeared first on Lifestyle Asia Singapore.

How to choose the perfect avocado, and how to ripen it quickly