Taiwan grows ever closer to Japan over vaccines, China fears

TAIPEI — At the start of June, there was tension in Taiwan as it struggled to source vaccines to battle its first serious COVID-19 outbreak. Japan came to the rescue, flying in 1.24 million doses, more than doubling the island’s supply.

Taiwan officials didn’t mask their deep gratitude. “As foreign minister, I shouldn’t share personal feelings in public,” tweeted Joseph Wu. “But after yesterday’s #Vaccine donation & the boiling emotions in #Taiwan, what the heck. I LOVE #JAPAN!”

There were also tweets of thanks from Taiwan’s president and vice-president — in Japanese. In Tokyo, Foreign Minister Toshimitsu Motegi called the gift of vaccines a sign of Japan’s “important partnership and friendship with Taiwan.” Taipei’s landmark Taipei 101 tower is lit up on July 15 with a sign reading “friendship between Japan and Taiwan.” (Screen captured from Taipei 101 Facebook page)

On Friday last week, Taiwan and Japan moved even closer with both two ruling parties holding their first ever joint security dialogue, with further — possibly higher level — talks to come.

Japan is speaking up for Taiwan as it fights pressure from Beijing, which claims the island as its own. In late June, Deputy Defense Minister Yasuhide Nakayama called for the world to “protect Taiwan as a democratic country” amid growing threats from China. In July, Japan’s deputy prime minister Taro Aso said Tokyo could join the U.S. in defending Taiwan if a Chinese invasion is interpreted as a threat to Japan’s own survival.

This was a dramatic shift in Tokyo’s stance, which for decades has avoided challenging Beijing and has been mindful of China’s importance to Japan’s economy.

While both Japan and Taiwan have a combative relationship with Beijing, this isn’t the only factor explaining close Tokyo-Taipei ties. Japan was grateful for donations of more than $240 million from Taiwan after its devastating 2011 earthquake and tsunami, and Japanese officials say the gift of COVID-19 vaccines was to show appreciation for Taiwan’s generosity.

Another factor was Shinzo Abe becoming Japan’s prime minister for a second time at the end of 2012, when the China-friendly Kuomintang (KMT) still held power in Taiwan. Abe took a much stronger stance on China than the previous Democratic Party of Japan government. And after Tsai Ing-wen became Taiwan’s president in 2016, ties with Japan blossomed. New Taipei city residents line up to receive a shot of AstraZeneca COVID-19 vaccine on June 15. The vaccines were part of the 1.24 million doses Taiwan received from Japan.     © EPA/Jiji

“There is no doubt that Japan is highly concerned about Taiwan’s security amid [China’s] growing military power and more and more Japanese analysts care and watch what happens in the Taiwan Strait,” said Arthur Ding, a professor emeritus at the Chengchi University in Taipei.

There is no guarantee ties will remain strong. Some observers in Taipei worry about a possible change of Japan’s leader. Prime Minister Yoshihide Suga, who is slumping in the polls, will face a challenge at the Sept. 29 elections for the presidency of the ruling Liberal Democratic Party (LDP), and lower house elections are due by November. If a new leader emerges, that might weaken support for Taiwan. So far this year, the Tokyo-Taipei relationship has steadily warmed. In April, Suga and U.S. President Joe Biden issued a statement that emphasized the importance of peace and stability in the Taiwan Strait and encouraged the peaceful resolution of issues between China and Taiwan. It was the first time Taiwan was mentioned in a Japan-U. S. leaders’ joint statement in more than 50 years.

One day later, Defense Minister Nobuo Kishi drove home how Japan sees Taiwan’s security as integral to its own when he visited Yonaguni, the Japanese island nearest to Taiwan. Photographed looking toward Taiwan only 110 km away, Kishi tweeted that he couldn’t see it due to cloudiness. Taiwan Foreign Minister Wu replied: “Thank you for looking out for #Taiwan, my dear friend @KishiNobuo. Cloud nor #COVID19 can get in the way of our friendship with #Japan.” 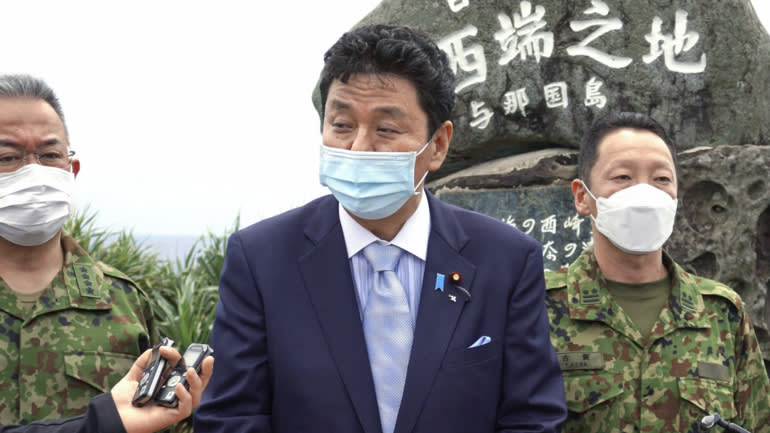 Japanese Defense Minister Nobuo Kishi speaks to reporters on April 17 on Yonaguni island, Okinawa prefecture. The island is only 110km from Taiwan.   © Kyodo

Some messages are conveyed by formal documents. In July, Japan’s annual Defense White Paper mentioned the importance of maintaining stability around Taiwan for the first time, saying: “We need to pay close attention to the situation with a sense of crisis, more than ever before.”

It is not just political ties that are getting stronger. Taiwan Semiconductor Manufacturing Co., the world’s biggest contract chipmaker, is planning to set up its first chip-making plant in Japan.

Strengthening economic ties are stretching into supermarkets. When China halted imports of Taiwanese pineapples in February, Japanese consumers heeded a call by Taiwan officials to support the island’s farmers. By May, exports of the fruit to Japan exceeded the total sold to the country over the past decade, and Japan has now replaced China as the biggest overseas market for Taiwanese pineapples.

Another example of boosted ties are the COVID-19 vaccines that Taiwan needed. Earlier, Taiwan leaders blamed Beijing for scuppering one deal. After that first Japanese delivery — which led to Taipei’s landmark 101 building being lit up with “Taiwan Loves Japan” — more donations arrived. In June and July combined, Japan sent more than 3.3 million doses. In 2018, 59% of Taiwanese said that Japan was their favorite foreign country, according to a survey of perceptions of Japan by the Japan-Taiwan Exchange Association, Tokyo’s de facto embassy in Taipei. That was far ahead of runners up China, with 8%, and the U.S. with 4%.

While Taiwanese speak Chinese and more than 95% of the population can trace their roots to China, people in Taiwan generally feel close to Japan, particularly its way of life, democratic traditions and freedom of speech.

“Theoretically Taiwanese people should feel closer to China, but in reality Taiwanese people feel their lifestyle, the way people act in society, is closer to Japan,” said Yujen Kuo, professor at Sun Yat-sen University’s Institute of China and Asia-Pacific Studies in Kaohsiung. Worsening relations between Taiwan and China made people have a “contrasting feeling” about Japan, he added.

Despite their affinity, Tokyo for years held Taipei at arm’s length so as to not offend Beijing. That, in Kuo’s view, stemmed from a feeling that it owed China a debt because of wartime atrocities by Japan’s army.

As a result, while Taiwan was reaching out for decades, Japan “has been very reluctant to develop any kind of official relations with the Taiwanese government or Taiwanese officials,” instead trying to keep them “under the table,” Kuo said.

Things changed after Abe became Japan’s premier a second time. China-Japan relations were already sour due to Tokyo’s nationalization of the Senkaku Islands in the East China Sea, which China claims and calls the Diaoyu. Abe drove through a pact — which had been discussed for 17 years — letting Taiwanese vessels fish near the islands, which Taipei also claims.

Japan’s fear is that an attack on Taiwan could be followed by another on those Tokyo-administered islands, or on other islands of Okinawa Prefecture. U.S. President Joe Biden and Japan’s Prime Minister Yoshihide Suga arrive for a joint news conference in the Rose Garden at the White House in Washington in April.   © Reuters

But while Japan-Taiwan relations have strengthened significantly, there’s still danger they could be knocked off track by Japan’s coming elections.

Kuo added that when Japan has a weak cabinet or prime minister “that’s the best timing for China to manipulate Japan’s domestic politics.”

It’s going to be very difficult for any new Japanese premier to act like Suga or Abe has done on Taiwan, he said, because that person might “not have a sound and solid power base. That’s the reason why it concerns us very much.”