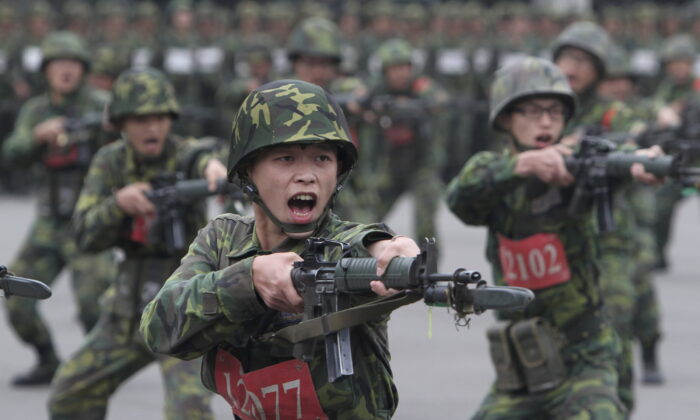 TAIPEI, Taiwan—Taiwan is considering extending its four-month compulsory military service, its defense minister said Wednesday, amid concerns about the self-governing island democracy’s tensions with China, which have been underscored by Russia’s invasion of Ukraine.

Defense Minister Chiu Kuo-cheng said the government would not implement any changes immediately but he vowed it would release the results of its internal research regardless of what it decides. Any changes would only be effective a year after being announced and would be made following consultation with legislators, he said.

“Currently, we are still in the research stage. This year we will definitely have results,” Chiu said.

Some in Taiwan have suggested the four-month compulsory military service should be longer.

In recent years, The Chinese communist regime has stepped up its military harassment of the self-ruled island, ending fighter jets flying toward Taiwan on a near-daily basis.

Taiwan and China split during a civil war in 1949. The Chinese regime claims the island as its own, despite the fact that Taiwan is a de facto independent country, with its own military, democratically-elected government, and constitution.

Many experts have drawn comparisons of the Taiwan–China situation to Russia’s invasion of Ukraine in February. However, the situation does not fit a simple narrative, and experts have so far said military action from the Chinese regime is unlikely. The war in Ukraine did prompt a lawmaker from the ruling Democratic Progressive Party in Taiwan to publicly say it is “necessary” to extend the mandatory service period.

Russia’s war against Ukraine has drawn sympathy in Taiwan, where the public raised more than $10.6 million in five days to help fund Ukrainian refugee relief efforts.

Taiwan has more than 215,000 members in its military, with the majority being volunteers. Taiwanese men over the age of 18 are required to serve for four months in the military.