TOKYO — Advanced nations are struggling with the dilemma that the stronger their leading companies are, the lower the economic growth rate becomes.

Oligopolies are increasing in the U.S., Europe and Japan. Over the past 25 years, the top three companies in each sector have outpaced their lesser rivals by about 30 percentage points in terms of revenue growth.

Leading companies have accelerated the mergers and acquisitions of up-and-coming rivals against the backdrop of prolonged monetary easing. The decline in competition due to oligopolies has slowed the pace of technological innovation, as shown in dwindling research and development budgets, which in turn hinders overall economic growth, according to experts.

Nikkei analyzed about 9,000 companies other than financial concerns in 76 industry sectors in the U.S., Europe and Japan, using data provided by Quick FactSet.

Among the findings, the top three companies in each sector have boosted accumulated revenue over the past 25 years at a pace 60 percentage points faster than lower rivals in the U.S., 35 points in Europe and nearly 10 points in Japan. Sales at the top three grew 2.7 times — about 30 points more than a 2.4-fold gain scored by smaller companies. An increase in M&As is exacerbating the problem of oligopolies.

Low-interest rates from relaxed monetary policies have benefited top companies more than smaller ones, and oligopolies are growing through M&As and other activities, according to experts such as Ernest Liu, assistant professor of economics at Princeton University. Global M&As in the last five years exceeded $20 trillion for the first time.

Oligopolization is taking place in other sectors as well. According to the International Monetary Fund, the ratio of gross profit to sales — which rises in an oligopolistic market — has risen in a wide range of sectors over the past 40 years. In particular, the ratio has risen in the health care and consumer services sectors in addition to technology.

In the January-March period, LVMH Moet Hennessy Louis Vuitton, the largest French luxury goods brand, posted sales larger than for same quarter of 2019 before the outbreak of COVID-19, due in part to the acquisition of Tiffany in January. 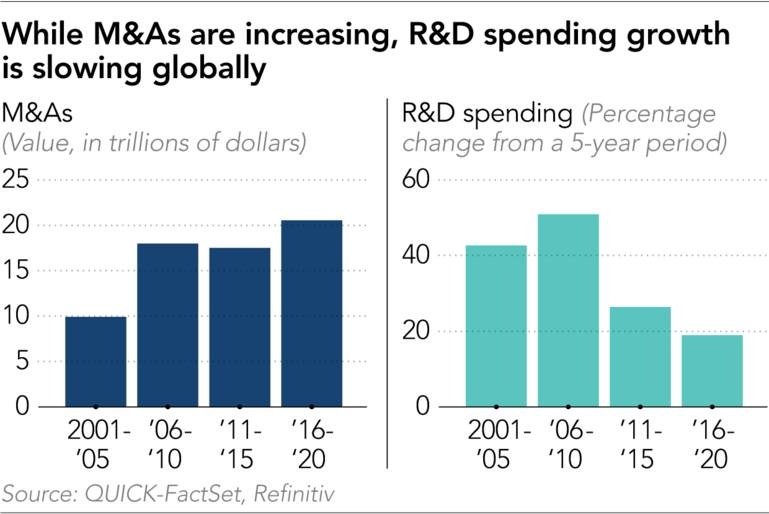 A key question is whether an oligopoly hampers tech innovation.

Monetary relaxation, expanded by central banks since the financial crisis of 2008, has encouraged businesses to accelerate M&As and use surplus funds to finance shareholder returns through share buybacks and other means.

As oligopolies destroy competition, companies have become less willing to spend on R&D.

R&D expenditures at listed companies show they have noticeably decreased since the 2010s. The pace has dropped in half from the decade starting in 2000.

The IMF warned in a March report that oligopolies may hamper innovation, saying that “when market leaders strengthen their lead over followers through M&As, the latter can become discouraged from competing and invest less in R&D.” 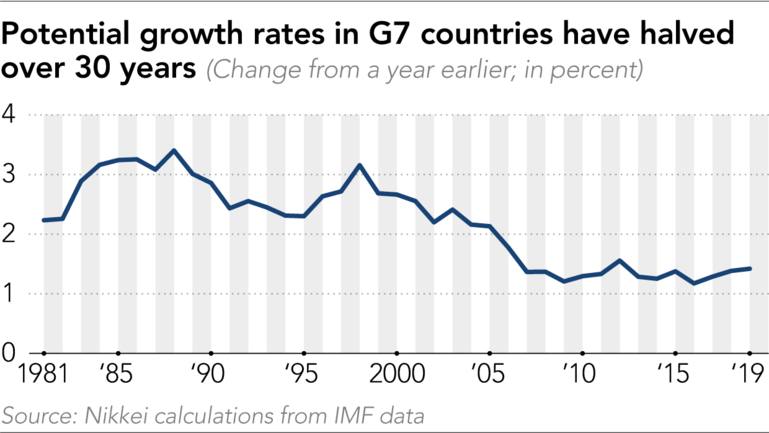 The potential growth rate of seven major economies dropped in half from the 1990s to 1.4% in 2019. The fall reflects slowing population growth, especially in developed nations, and a shift to the digital economy, lessening spillover effects on capital investment and other positive factors. In addition, experts such as Liu of Princeton said stagnating innovation is contributing to falls in potential growth rates.

Arguments in favor of reviving competition are increasingly being heard, especially in the U.S. and Europe amid criticism against the market domination of tech companies.

In the U.S., the Federal Trade Commission sued Facebook in December 2020, alleging that the company acquired Instagram and WhatsApp “to eliminate threats to its monopoly” of the personal social networking market.

In April, the Japan Fair Trade Commission launched a survey of cloud services, with Amazon.com and other foreign IT companies in its sights.

However, authorities are struggling to figure out how to cope with these giants, as their free services are not necessarily considered undermining consumer benefits.

How to promote competition that can stimulate innovation may become important if the world is to realize its economic growth potential.

The Secret To Affordable Wall Art