NEW DELHI — Already grappling with a deadly second wave of the coronavirus, India is now faced with a new challenge: the alarming rise in cases of mucormycosis, a rare but potentially fatal infection also known as black fungus.

The fungal disease — which the U.S. Centers for Disease Control and Prevention says has a fatality rate of 54% — has been reported among several thousand people, mostly diabetics recovering or having recovered from COVID-19. Several Indian states have declared black fungus an epidemic, prompting calls for the national government to stockpile the drug used in its treatment.

Delhi Chief Minister Arvind Kejriwal said on Monday there were close to 500 black fungus patients in the capital but that there was a shortage of medication.

The country typically gives injections of the drug amphotericin B to patients, who can exhibit blackening or discoloration over the nose, blurred or double vision, chest pains, breathing difficulties and coughing up blood.

“One patient requires four to five injections daily, and currently we need 2,000 injections every day but are receiving just 400 to 500,” Kejriwal said. 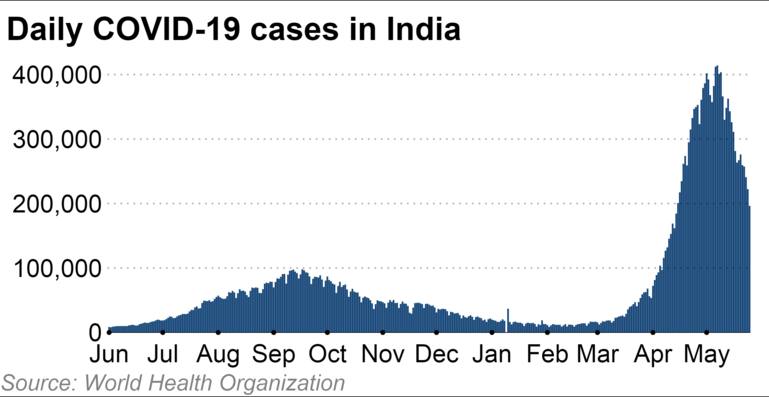 The government of Prime Minister Narendra Modi, meanwhile, assured local authorities that sufficient supplies of the drug would soon be available. “There is a lot of concern in the country about the availability of amphotericin B,” Health Minister Harsh Vardhan said on Monday, adding that 900,000 vials of the drug are being imported. Of these, 50,000 have already been received and about 300,000 more are expected to be available within a week.

As of Monday morning, the health minister said that 5,424 cases had been reported from 18 of the country’s 36 states and federally governed territories, with over 4,550 patients having a history of COVID-19 infection. “Diabetes was present in 55% of the patients,” he added.

The fungal infection is caused by a group of fungi known as mucormycetes, which naturally occur in the environment. They are found mostly in soil and decaying organic matter such as leaves and compost.

Under normal circumstances, the body’s immune system can successfully fight fungal infections. However, COVID-19 patients — especially those with diabetes — are at high risk, as drugs to treat coronavirus also suppress the immune system. Moreover, COVID patients undergoing oxygen therapy in the intensive care units of hospitals are prone to fungal infection because of moisture discharged from humidifiers, which are commonly found in the units.

“While the infection may just begin with a skin infection, it can spread to other parts of the body,” a recent health ministry statement said, adding that treatment involves surgically removing all dead and infected tissue. “In some patients, this may result in the loss of the upper jaw or sometimes even the eye.”

In a May 21 online meeting with health workers in the northern city of Varanasi, Modi said black fungus presents “a new challenge in our fight against the pandemic.”

“We must take necessary precautions [against the fungus] and make preparations to deal with it,” he said. 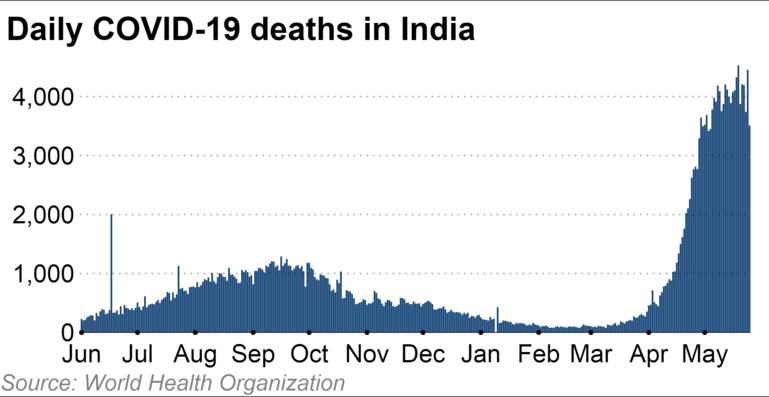 Health experts are concerned about the increasing occurrence of black fungus during the latest coronavirus wave. “It is because of the indiscriminate use of steroids on COVID-19 patients [compared with last year] which is leading to a rise in blood sugar levels,” said Rajinder K. Dhamija, head of the neurology department in New Delhi’s Lady Hardinge Medical College, in comments to Nikkei Asia.

Diabetics already have comparatively weak immune systems, which exacerbates fungal diseases. “Black fungus is a very dangerous disease and could become fatal,” Dhamija said, adding, however, that a cure is available if the condition is diagnosed early.

Black fungus was already present even before the COVID-19 pandemic surfaced, but “we used to rarely see such cases,” he said. “There should be judicious use of steroids and people should also regularly monitor their blood sugar levels and keep diabetes under control.”