SEOUL — Members of South Korea’s once-venerated “86 Generation” — which comprises many of those who played key roles in bringing down the country’s military government — are now wondering where they lost their way.

This has put President Moon Jae-in’s administration in a delicate situation; of the South Koreans who in their heyday changed the course of their country’s history and now serve as lawmakers, many find themselves at the center of Moon’s government.

On Aug. 10, Democratic Party chief Song Young-gil posted a comment on Facebook titled: “Is the 86 Generation a vested interest? I accept the criticism sincerely.”

“I don’t know when it began,” Song wrote, “but criticism against the 86 Generation has become normal these days. At first, I thought it was an attack from conservative media and the opposition, but it was not.

“We are beginning to understand that the evaluation of our role and the pride we took in it have faded.”

He also reminisced about playing that role: “We [thought we] were nearly the only generation that struggled and came together to fix our problems in modern South Korean history.”

At once, Song acknowledged his sense of pride in being part of the generation that brought democracy to South Korea and admitted to being confused as to why younger generations have a different perception. He went on to wonder if it is time for his generation to pass the baton to the next runner.

“We rose up against the military regime for democracy,” his post says. “Some of us went to jail, some were killed and some resisted with death. We did win the fight, but we could not gather the strength and power necessary to better deal with subsequent changes. 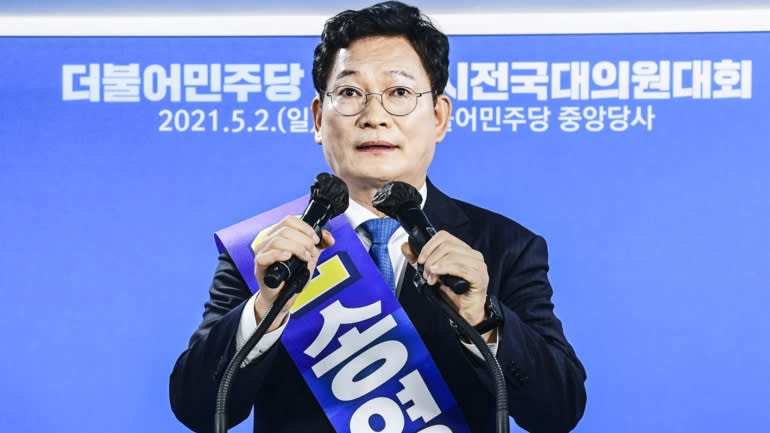 Will new Democratic Party leader Song Young-gil make good on his statement that it is time to “make concessions for future generations?”   © Yonhap/Kyodo

“What I think is sad is the criticism that the 86 Generation has become a vested interest. It is time for our generation to prepare and make concessions for future generations.”

In the moniker, the “8” stands for the 1980s, when this generation was in college, while the “6” stands for the 1960s, when it was born. Now in their 50s, many South Koreans of this age spent the 1980s participating in a pro-democracy movement against President Chun Doo-hwan’s military government. This followed the Gwangju Uprising of 1980, when the military fired at protesters in the southwestern city, killing hundreds.

When they reached their 30s and started leading society in the 1990s, the term 386 Generation emerged. Now it’s the 586 Generation as many are in their 50s.

At first, the term 386 was refreshing; it carried connotations of a generation that faced off against a strongman’s military and managed to forge a path to a new era. But many younger Koreans now attach negative connotations to the term; to them, it describes “those who cling to vested interests.”

In September 2019, the JoongAng Ilbo ran a many-sided article with troves of data on the generation that dominates South Korean society. The mid-size daily newspaper’s headline blared, “72% of directors at South Korea’s top 100 companies and 44% of lawmakers are from the 86 Generation: South Korea is a country of the 386 Generation.”

According to the newspaper, 14 30-something candidates, including Song, were elected in the 2000 general election, under the Kim Dae-jung administration. In 2004, the 86 Generation became the mainstream when 68 candidates from that age bracket were elected under President Roh Moo-hyun.

At South Korean companies, the currency crisis that slammed South Korea in 1997 provided a tailwind to the 86 Generation. Companies had to undergo major restructurings to survive, and older executives in senior positions were ushered into “honorable retirements.”

Previously, many South Koreans who had not become directors would leave companies before turning 50. But as it has become increasingly difficult for companies to blatantly force their older employees to quit, many workers now stay on until retirement. 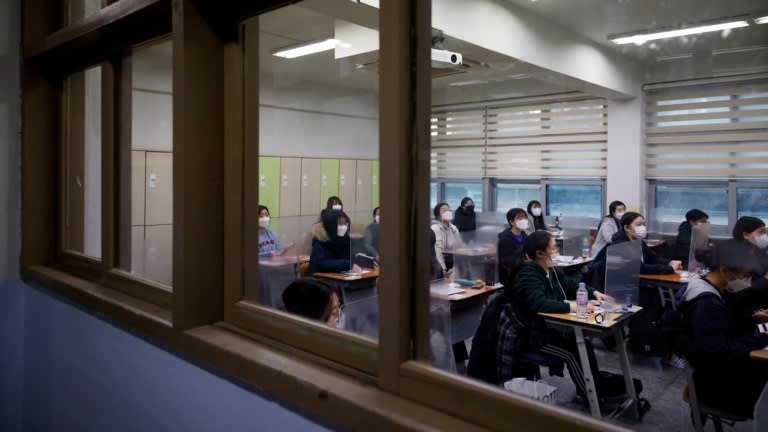 Students wait for their college entrance exams to begin in Seoul on Dec. 3, 2020. Today, a lot more than a degree stands between young South Koreans and a comfortable career.   © Reuters

This leaves younger generations on the bottom rungs; gaining a full-time position is extremely difficult now that many companies are curbing their hiring.

In politics, more older lawmakers remain on the scene, making it less likely lawmakers in their 40s or younger will be elected.

For those starting their careers, graduating from a university doesn’t cut it, anymore. English proficiency has become a must. Only outstanding grades matter. Having relatives with connections is essential. And internships that improve an eventual job-seeker’s so-called “specs,” or credentials, must be piled up.

The 86ers, meanwhile, believe they deserve their current positions, having obtained them, in part, by risking their lives to take down the military government. To younger generations, their elders come from “the generation that did not study hard yet clings to the vested interests they latched onto by merely flowing with the tide.”

86ers who ramble on about the past and begin their tales with the phrase nattaeneun mariya — back in my day — have earned the epithet kkondae; they are hated by young Koreans.

The 50-somethings realized in April that a hard-to-fill perception gap between themselves and those younger than them had opened. That is when the ruling party suffered devastating defeats in mayoral elections in Seoul and Busan, the country’s two largest cities.

But it is more than perception. A series of scandals that symbolizes 86ers’ special treatment has emerged during the Moon administration.

In one, the wife of former Justice Minister Cho Kuk was given a four-year prison term on charges she forged a presidential citation from Dongyang University and obtained a false internship certificate to use in getting her daughter admitted to a medical school in 2013. South Korean men in their 20s expressed outrage at the Moon administration for granting special treatment to a compromised insider while at the same time crusading for justice.

The upset was all the more remarkable considering the People Power Party has an elderly support base.

As for Na, she entered Seoul National University’s law faculty in 1982. Her classmates included Cho Kuk and Won Hee-ryong, a former governor of Jeju Province who is running in the upcoming presidential election. Upset winner Lee wasted little time in highlighting the generational divide, announcing that the PPP will require those who run for public office to pass qualifying exams, including a computer literacy test, declaring that no young South Korean office worker today has difficulty using Excel. While older lawmakers strongly oppose Lee’s decreeing that they have basic skills, younger generations feel the requirement is only natural.

It was around the time Lee began attracting growing numbers of young people to the PPP that the Democratic Party’s 86er legislators began reflecting on where they went wrong. Lawmaker Lee Won-uk on June 15 posted a Facebook comment about the mayoral losses and Lee Jun-seok’s PPP victory.

“What the 86 Generation, the mainstream of the Democratic Party, will have to do is self-observation and self-reflection,” the post says. “We will have to face up to why our friends in their 20s and 30s left us.”

Will the party’s 86 generation lawmakers follow through on promises to retire and make room for younger aspirants? Many experts expect them to remain in the mainstream for a while. Of South Korea’s more than 51 million people, 8.59 million, about 16.6%, are in their 50s, the largest slice. There are 6.75 million 20-somethings; they make up 13.1% of the population.

No wonder, then, that the younger generations are casting a stern eye on the 86 Generation’s self-reflection proclamations, calling them nothing more than a political ploy to win back the youth vote.