SEOUL — Announcing the arrival of 378 people from Afghanistan in South Korea, Justice Minister Park Beom-gye referred to them not as refugees but as “our Afghan friends.”

In an apparent effort to stem public discontent, Park on Thursday explained that the evacuees spent years working closely with South Korea, assisting diplomats and development professionals with efforts to rebuild the country. Among them are IT professionals, interpreters and medical workers.

“They may have lived in a far-off country, but really they’re like neighbors who have lived alongside us,” Park said.

In the chaos that has followed the pullout of the U.S. military, scenes of desperation are playing out at Afghanistan’s main airport as thousands try to flee a country taken over by the Taliban militant group.

In the sudden security vacuum, particularly vulnerable to targeting by the Taliban were Afghans who had worked with foreign forces. The South Korean government therefore decided to follow the example of other countries who evacuated Afghans they had worked with and their families.

South Korea, a peninsular country with a history of ethnic homogeneity, does not have an extensive history of welcoming outsiders, and the government’s decision to bring in hundreds of people from a poor, war-torn majority Muslim country has been met with disapproval in some quarters.

The Afghans’ arrival echoes 2018 when groups of asylum seekers from Yemen arrived on a South Korean island, sparking weeks of angry, nativist protests in Seoul. More than 700,000 South Koreans signed a petition calling for the Yemenis to be denied any government support.

This time around, the South Korean government is speaking more decisively in the language of international commitments. President Moon Jae-in said this week that his country has a “moral responsibility” to the Afghans, and Park mentioned how countries including the U.K., the U.S. and Germany had arranged flights to evacuate Afghans, and alluded to South Korea’s history of having received assistance from abroad during and after the 1950-53 Korean War.

“We also must fulfill our responsibilities to the international community as befits the stature of the Republic of Korea,” Park said, using the country’s official name.

Shin Kak-soo, a former South Korean diplomat has who served at the United Nations and as ambassador to Japan, called the evacuation “the excellent result of work by our diplomats and soldiers amid the sudden chaos and tense situations in Kabul.”

“No one is happy to leave their home. The Afghans made a difficult choice for their life and freedom, and we are doing our part as a responsible country,” Shin told Nikkei Asia.

The government has said that the evacuees would be housed for several weeks in a state-run facility south of the capital, and would be granted long-term stay visas that can eventually lead to permanent residency.

The stable immigration status bestowed on the arrivals contrasts with neighboring Japan, where Foreign Minister Toshimitsu Motegi stopped short of committing to resettle Afghans in the country.

“The most urgent matter is that all people who wish to leave Afghanistan be able to safely find shelter, that we should exert all efforts to avoid a humanitarian crisis,” Motegi said on August 19, his most recent press briefing since Kabul fell to the Taliban.

Among the Group of Seven advanced economies, Japan has the lowest rate of refugee resettlement, taking in only 216 in the past five years.

While Japanese Self-Defense Forces have been dispatched to evacuate Afghans who worked for the Japanese Embassy and international aid office, no plans have been made to accept other Afghan refugees.

“It’s not decided yet where they will go or if they will be resettled in Japan. Our mission is just first to get them out of Kabul,” a spokesperson for the foreign ministry said about the Afghan evacuees. 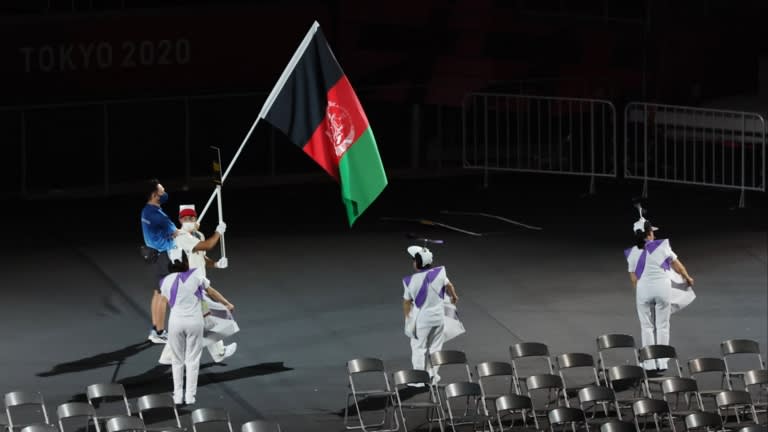 The Afghanistan flag is paraded during the opening ceremony for the Paralympic Games in Tokyo on Tuesday.   © Reuters

During his address on Thursday, Park, the justice minister, implored South Korean citizens to welcome the new arrivals. Park said the government will provide the Afghans with Korean language classes and other education to help them adapt.

In a widely-read column published on Aug. 23 in the left-wing Kyunghyang Newspaper, a writer implored the Afghans not to come to South Korea because, he argued with a hefty dose of sarcasm, they would later regret relocating here, that the average South Korean would suspect them of being Taliban-sympathizers who are liable to carry out acts of terrorism.

The column concludes with the line “If you find this hard to believe, just look at the comments beneath this post.”

As predicted, many of the comments decried the government’s decision to extend assistance to people from Afghanistan at a time when many South Koreans feel they need more government support.

Analysts have argued that an increasing scarcity of affordable housing and stable jobs in South Korea is leading to more online expressions of bitterness. “The intense culture of competition that has built Korea up into an industrialized country has sapped it of consideration for others,” said Se-Woong Koo, a scholar and political analyst who has written on racism in South Korea.

“There isn’t much room for class mobility any more, and that’s why the public discourse turns against anyone perceived as eating into the pie ‘unfairly’ — especially women and foreigners.”

Make L.A. Kalbi the Sweet-Salty Star of Your Next BBQ