TOKYO — Hot on the heels of Apple’s drive into the realm of electric vehicles, Sony is trying to shift from electronics and services into auto manufacturing.

The Japanese company has already started public road tests of its Vision-S EV as it attempts to leverage its smartphone and software prowess into making vehicles. A closer look at the inside of its concept car reveals a major focus on autonomous driving and integrated control of the entire vehicle.

In December 2020, Sony began public road tests in Austria. Surprisingly, it took only two years from the start of the project to reach this point. “We spent a lot of time firming up the concept of the vehicle,” so the actual development period was much shorter, said Izumi Kawanishi, the Sony executive in charge of Sony’s AI robotics business.

How was Sony — a newbie as regards automobile development — able to develop its concept car so quickly?

Being electric means Sony does not have to figure out unfamiliar internal-combustion-engine (ICE) technology. The car also needs software, another Sony advantage. The company also prides itself on “agile development,” which can quickly adapt to changing production requirements — a major step up from “waterfall development,” a process common to conventional auto development, in which specifications are fixed before development begins.

Agile development has been employed mainly in technical fields, such as human-machine interfaces in vehicle instrument panels and 5G communications. Sony also repurposed many assets from smartphones and other devices.

Kawanishi says that “agile development was relatively successful” in automated driving, which involves basic car functions like “running, stopping and turning” and about which Sony had little expertise. The smartphone style worked better than expected in auto development.

But Sony found it difficult to apply agile development to traditional control processes, like drive motors and steering. These systems are related to safety, so it was difficult to rely on trial and error during development. Hence, the company fell back on the industry-standard waterfall development, trying to “get the best of both” development methods, Kawanishi said.

Now that mega-suppliers have improved capabilities comparable with those of automakers, shorter development times are a distinct possibility. Parts companies like Bosch, Continental and ZF are nearly able to produce an entire vehicle. Magna Steyr in Austria, which Sony relied on for development of the auto body, has a long track record.

And focusing on EVs is also significant: It would be difficult for an electronics company to develop an ICE vehicle in such a short time. Only traditional automakers have the expertise required to develop and mass-produce ICE vehicles. For EVs, however, a newcomer like Sony can easily procure motors and batteries to replace the internal combustion engine.

One of Sony’s goals in developing Vision-S EV is to improve its image sensor operations, a core business. Autonomous drive technology — and the sensors at its core — is still evolving. Sony hopes that by completely building its own vehicle, it can quickly determine what performance is needed and beat competitors in mass-producing the crucial component. In addition, Sony has started developing its own light detection and ranging (lidar) system in an attempt to expand the scope of its automated driving sensors. The company also wants to determine the best usage for its image sensors and lidar.

In Vision-S EV, the core electronic platform was divided into five major areas, each equipped with its own computer. Among them, the company will try to speed up its advanced driver-assistance systems (ADAS), which control autonomous driving, by using technology from other companies. Improving sensor-related technologies will be a top priority. Sony itself appears to be focusing more on “sensor recognition” technology and leaving much of the “decision-making” control software that controls car movements to other companies.

Specifically, it will use technology from AImotive in Hungary, which is developing AI semiconductors, and system-on-a-chip processors and automated driving software from Nvidia in the U.S. “Automated driving technology is an accumulation of many different functions,” said Kawanishi. “We don’t think we can do it all on our own,” and that division of labor in these fields is essential.

Another aim of the Sony car is to gauge the overlap between Sony’s existing businesses and self-driving cars. The HMI and communications areas are good examples. Many smartphones use Qualcomm’s Snapdragon chip and Android as their operating system. Communications in the Sony car will be based on a Qualcomm 5G chipset — similar to that used in the Sony Xperia smartphone and readily compatible with existing businesses.

In HMI and communications, the use of onboard ethernet with a data transfer rate of up to 1 gigabit per second is also crucial to agile development. The system will offer exceptionally fast communications for an automotive network, which are usually limited to a few hundred kilobits per second. This allows engineers to focus on software development without worrying about the limitations of data transfer speeds.

ADAS and vehicle movement also make use of ethernet, but the data transfer rate is limited to 100 megabits per second.

Sony is positioning its car to be a “personal internet device,” said Kawanishi. The use of ethernet will help Sony link the car to internet services.

For example, it will be easier to create new services by connecting the Sony car with the PlayStation Plus, which has over 47 million subscribers. A real version of a car from the popular racing series “Gran Turismo” could become a reality. Sony can take advantage of the fact that there are few large-scale internet services in the auto industry.

And as an internet device, the car can also function as a payment device. “Sony, which developed [contactless IC card technology] Felica, can use its strength in cryptography technology for EVs,” said Sanshiro Fukao, senior fellow at Itochu Research Institute. That will make it easier for the company to develop new mobility services, such as charging fees based on the distance traveled or the amount of power charged.

In addition to performance, which is becoming increasingly important for automated vehicles, Kawanishi believes Sony’s technology can be used to control ride comfort. The Sony car will be a “noise-canceling car,” he said.

Noise cancellation is a Sony specialty. The technology uses headphones’ built-in microphone to measure ambient noise and generate sound in reverse phase to cancel it. The same is true for the control of ride comfort, where control of the suspension cancels out vibrations caused by irregularities in the road.

The Sony car is equipped with variable damping dampers and an air suspension that controls the spring constant. Sony will also use sensor technology to measure unevenness in the road. If motion sickness can be kept in check, riders can watch videos or work in self-driving cars. The goal is to create an environment where riders can fully enjoy Sony’s video content.

In addition to the suspension, Sony is working on the vehicle’s integrated control, including the drive motor and batteries. To make a car that does not shake or make riders feel sick, engineers need to control the front and rear acceleration with the drive motor while simultaneously suppressing vertical and horizontal vibrations with the suspension.

Sony wants to control even the vehicle’s body. Engineers can create a comfortable interior space by controlling the seats, interior temperature, lighting and so on. The thinking is to take advantage of Sony’s strength in consumer electronics for these functions.

However, it is beyond the scope of sensor manufacturers to handle vehicle motion and body control, which is largely the realm of automakers. Sony is looking at the mass production of EVs in the future, but Kawanishi said the goal of the Sony car project is to gain knowledge about cars, not mass production. “We want to properly understand the structure of cars by building EVs ourselves,” he said.

Moreover, mass producing EVs is risky. Production generally requires an investment of over 100 billion yen ($903.7 million), and mistakes in auto design or assembly can have major impacts on people’s lives. One mistake could irreparably damage Sony’s brand.

But these risks are expected to become smaller. There are signs that the horizontal division of labor in production is expanding. For example, Taiwan’s Foxconn, a contract manufacturer of iPhones, announced that it will start development of an EV platform. The arrival of the Apple car could encourage the same kind of horizontal division of labor in EVs as exists in iPhones. 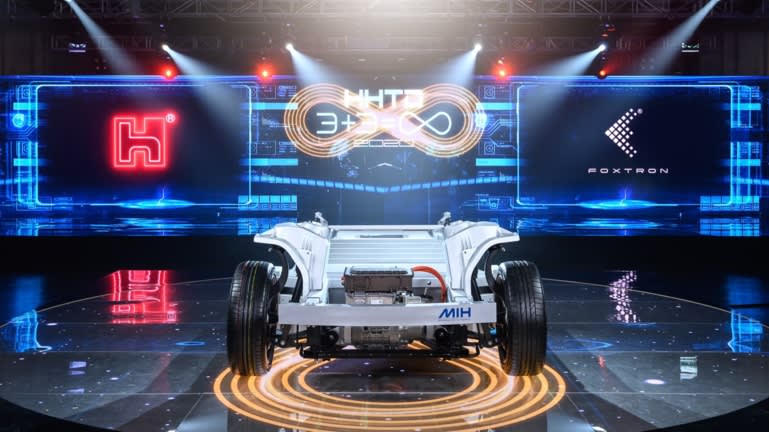 More than 1,200 companies have said they would participate in Foxconn’s EV platform development concept. (Photo courtesy of Foxconn)

Contract production of EVs “will not be easy, but it’s a matter of time,” said Kawanishi. “It’s completely possible.” Sony has a history of working with Foxconn in televisions and other areas. Sony has not talked with Foxconn about EVs, according to Kawanishi, but the option of a horizontal division of labor would make a decision on mass production easier.

Regarding measures to counter the risk of damage to Sony’s brand, some believe that changing the company name to Sony Group from April 2021 and separating the headquarters function from the business organization may help. “If they make the EV business a separate brand, it will be easier to manage by itself,” said Ryosuke Katsura of SMBC Nikko Securities.

The result would be similar to Germany’s Volkswagen Group, which uses the VW brand for mass-market cars and the Porsche brand for luxury sports cars. Even if a major recall were to happen for VW brand models, the ripple effect on Porsche would be minimal. The change to Sony Group will make it easier to implement this kind of multi-brand strategy.

“We haven’t deviated much from our initial assumptions,” said Kawanishi. The development of the Sony car is moving forward much more smoothly than those involved expected. The company has also learned that there are many areas where its existing technological assets can be put to use.

It is thought that the profit levels of EVs and conventional engine vehicles will balance around 2025 after accounting for subsidies, and the EV market will then expand rapidly. As horizontal divisions of labor in production become more widespread, entry barriers for EVs will drop significantly. The stage is being set for the Sony car to take on the Apple car.

Philippine man dies after being forced to do squats for breaking coronavirus curfew, police investigating