SINGAPORE — Singapore has plenty of catch-up to do if it wants to match chipmaking powerhouses in Asia like Taiwan, even as it sees an influx of semiconductor-related investments announced over the past year to the tune of billions of dollars.

Although it is known in Asia as a prominent financial and technology hub, Singapore’s peers in the region dwarf it in chipmaking. The city-state is attempting to shore up its electronics sector, having set a target to grow its manufacturing industry by 50% by 2030, with the semiconductor segment featuring strongly in the effort. Foreign investment will play a key role in reaching the target.

U.S. semiconductor maker GlobalFoundries announced in June that it would invest over $4 billion in Singapore to expand its wafer plan as it attempts to tackle a global microchip shortage.

“Hiring could increase, with the company listing talent-acquisition specialist roles to hire for its offices and facilities in the U.S., Germany, Singapore, and India,” noted Ajay Thalluri, an analyst at data and analytics company GlobalData. 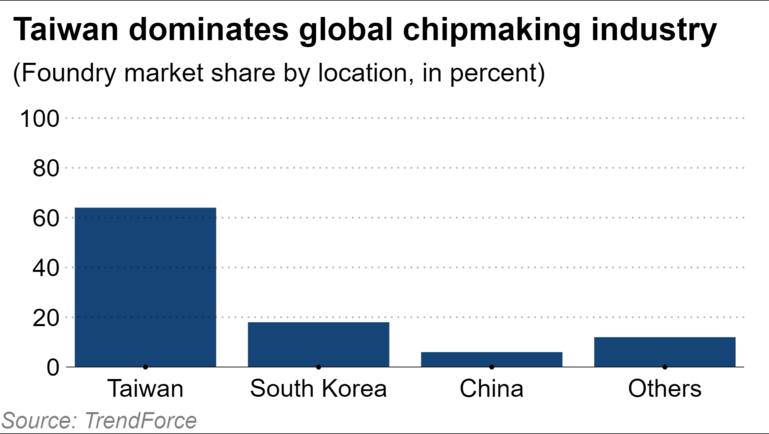 GlobalFoundries’ announcement came after German chipmaker Infineon Technologies picked Singapore as its base for developing artificial intelligence applications, with an investment commitment of 27 million Singapore dollars ($20.2 million) announced in December.

Singapore has ambitions to grow across the value chain in the semiconductor industry, from chip design, to wafer fabrication, to assembly and testing — as well as in supporting areas like research and development and regional distribution.

“Singapore may benefit from more investments by foundry players for sure, but … [the] major players in the foundry market are Taiwan, Korea and China,” a spokesperson for semiconductor research outfit TrendForce told Nikkei Asia, noting that the trio accounted for nearly all the world’s market share.

According to TrendForce, Taiwan generates 64% of the world’s nearly $90 billion in foundry revenue, with South Korea taking up 18%, China 6% and other countries 12%. A foundry makes chips for other companies.

Taiwan’s chipmaking giants dominate the industry. In the first quarter of this year, Taiwan Semiconductor Manufacturing Company held 55% of the global market, according to TrendForce, with its peer United Microelectronics Corporation taking 7%.

South Korea’s Samsung was second after TSMC, commanding 17%. While Singapore is poised to benefit from GlobalFoundries’ multibillion-dollar investment, which will inject new jobs and buzz to the country’s manufacturing sector, GlobalFoundries accounts for just 5% of the global market, based on TrendForce’s first quarter data.

Singapore accounts for about 5% of global wafer fabrication capacity, according to Alvin Tan, minister of state at the Trade and Industry Ministry, who spoke at a meeting of semiconductor industry players in July.

“Companies invest here because of our skilled talent, our global connectivity, ease of doing business, and well-developed semiconductor research and manufacturing ecosystem,” he said during the meeting, noting that the country also holds 19% of the global market for semiconductor equipment — the tools used to make chips.

The clamor for semiconductors has risen as the COVID-19 pandemic contributed to the global chip shortage, giving rise to a supply crunch that began to hit automakers earlier this year and has become a pressing issue for governments.

The health crisis has also increased global demand for consumer electronics and digital services, fueling demand for the chips that power them. But the world’s reliance on Taiwanese chipmakers has raised concerns over the risk of supply disruptions.

Washington’s latest supply chain review pointed out that dependence on Taiwan for advanced chips is a potential vulnerability for semiconductor supply chains, with a disruption in production on the island potentially costing nearly $500 billion in lost revenue for electronic device manufacturers.

Chip nationalism has gained momentum in the past year. The U.S. Senate passed a bipartisan bill worth $52 billion to support the domestic chip industry, while the European Union aims to localize 20% of semiconductor production by 2030. Japan and China have also made development of their semiconductor industries a top policy priority.

But Singapore’s ability to gain significantly from this shift is in doubt, apart from the substantial investments earmarked for the city-state by chip players. Even with a push for supply chain diversification, Taiwan will not relinquish its dominant position in the sector over the short term, said Guo Yu, lead Asia-Pacific analyst at strategic advisory Sibylline.

“Compared to Singapore, Taiwan will retain some advantages, such as lower operational costs [for land and labor], more established and better integrated supporting industries — many major assemblers [and] makers of personal devices and home electronics,” Yu said. “Singapore will likely meet stiff competition from elsewhere as the mass scramble for chips has prompted many governments to push for stronger self-reliance in semiconductors.”

South Korea and China, then, are likely to stand out as potential non-Taiwanese sources for industry players to look to, according to Yan Li, a professor of information systems, decision sciences and statistics at ESSEC Business School Asia-Pacific.

“The world’s second-largest chipmaker, Samsung, also South Korea’s largest company, announced in May 2020, that it has begun the construction of a $116 billion cutting-edge chip production line intended to help it take on TSMC,” he noted.

Li stressed that China’s determination to increase its self-sufficiency in the semiconductor industry amid tensions with the U.S. should not be ignored.

Even so, the two large East Asian economies, and Singapore, would be hard-pressed to challenge Taiwan, which has established a very efficient and profitable ecosystem for chipmaking that is not easy for others to imitate, Li said.

“In a nutshell, diversification away from Taiwan chipmakers is a necessary attempt, but it is not easy and it takes time.”