SINGAPORE — Asian airlines have been restructuring their operations to pave the way for a rebound from the COVID-19 pandemic, but the latest quarterly results show many continued to log big losses, as the industry outlook dims over recent virus flare-ups in the region.

One company greatly affected is Singapore Airlines, which on Wednesday reported a net loss of about 660 million Singapore dollars ($490 million) for the January-March quarter, the last in its financial year, leading to an annual net loss of SG$4.27 billion.

In the year ended March, it served just 596,000 passengers, down a whopping 98% from a year ago due to global travel restrictions to fend off the spread of COVID-19. Its cargo business fared better, with volume down just 39% from the previous year, thanks to high global demand for medical equipment and e-commerce shipping.

The airline marked a total impairment charge of SG$1.7 billion for 45 aircraft in the year, scaling down its operations to prepare for a recovery.

But the airline’s outlook remains uncertain, especially as many of its key markets, like India, Thailand and Japan, now face a resurgence of the coronavirus and because vaccination speeds in Asia has been slower than in the U.S. and Europe. In normal times, Singapore Airlines flies to 13 cities in India, including Mumbai and Chennai.

Earlier this week, Singapore and Hong Kong deferred a quarantine-free “travel bubble” due to a COVID uptick in Singapore. Singapore Airlines and Cathay Pacific Airways had been slated to operate the flights. Singapore also lost the World Economic Forum’s special annual meeting set for August, a big event that would have helped the transport and tourism sectors. 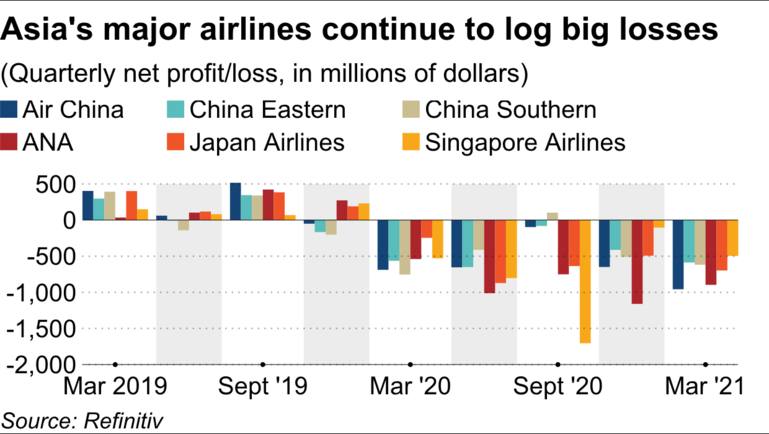 Moreover, many of the recent COVID cases in Singapore were linked to a cluster that emerged at Changi Airport, which resulted in the temporary closure of passenger terminals.

“Even though mass vaccination exercises are in progress in most of our major markets, the prognosis for the global airline industry remains uncertain,” the company said in a statement. “While domestic markets have recovered in some countries, international air travel remains severely constrained and its recovery trajectory is still unclear.”

It added that its passenger capacity will still only be about 28% of pre-COVID levels next month.

Singapore Airlines on Wednesday also said that it will raise an additional SG$6.2 billion through convertible bonds to secure higher liquidity to weather the pandemic impact. The airline earlier this month announced it had raised about SG$2 billion through the sale and lease-back of 11 aircraft.

Many airlines in the region are restructuring businesses, such as writing down older jets and scaling back their fleets. But the latest quarterly results suggest the impact of the pandemic continued to be huge. Japan’s ANA has said it expects to return to profitability, at 3.5 billion yen ($32 million) net profit, for the current fiscal year through March 2022. (Photo by Ken Kobayashi)

“There remains great complexity and uncertainty as to the global situation of COVID-19. It is expected that the operating results of the company in the first half of 2021 may still be adversely affected by COVID-19,” China Eastern said in its quarterly financial report filed to the Hong Kong exchange late last month. China Southern had a similar warning in its report.

Japan’s ANA has said it expects to return to profitability, forecasting 3.5 billion yen ($32 million) in net profit for the current fiscal year through March 2022, citing the expected progress of the vaccination rollout in the country, the reopening of borders and steady cargo demand.

Fewer Canadian women appear to be travelling to U.S. for abortions during COVID-19