TOKYO — Robert “Skipp” Orr, former U.S. ambassador to the Asian Development Bank and a key figure in the U.S-Japan relationship, died Aug. 12. He was 68.

Published obituaries duly noted his many considerable accomplishments. In addition to his work at the Asian Development Bank, Orr served as vice president of Motorola in Japan, and later as president of Boeing Japan, where the components for the Boeing Dreamliner were manufactured.

He also earned a doctorate from Tokyo University and a master’s in government from Georgetown. The Order of the Rising Sun was conferred upon him by the emperor of Japan in 2019.

But there was more to Skipp Orr — much more. He was married to classical pianist and music critic Mitsuko Orr for 45 years. The couple first met in 1973, when she was an exchange student in Belleview, Florida, and he was at Florida Atlantic University, having just returned from a year of study in Germany.

Romance bloomed, and the two wed in an English-language ceremony at Tokyo Union Church in Tokyo’s Omotesando district — Orr’s first trip to Japan — in April 1976.

Moving to Washington, D.C., Skipp enrolled at the Georgetown School of Government, while Miko studied for a master’s in music at the Catholic University of America, whose famous alumni include pianist Don Shirley, the inspiration for the 2018 Oscar-winning film “Green Book.”

Working his way through Georgetown, Orr was a legislative assistant to then-Democratic Rep. Paul Rodgers. His duties included serving as an official doorman for the House of Representatives, which gave him a chance to interact with all members of Congress.

After striking up a conversation with Rep. Norman Mineta by announcing that his wife was from Japan, Orr and his wife were invited by the representative from California to lunch at the congressional restaurant the following week, and a lifelong friendship ensued. Another lifelong friendship was struck with fellow intern Chris Matthews, who later became famous as a political commentator.

Selected as an escort for Queen Elizabeth II, who traveled to the capital for the 1976 U.S. bicentennial celebration, he afterward was approached by a royal aide who handed him her majesty’s menu as well as a small rose bouquet she had been given. The menu, marked by a small red wine stain, now decorates a bookcase at the Orr residence in Kamakura, south of Yokohama. 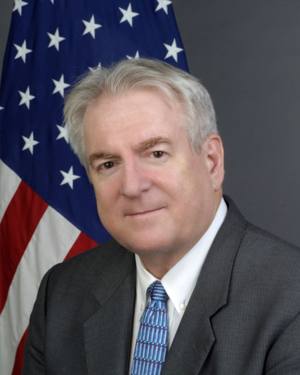 As ambassador to the Asian Development Bank, nothing gave Orr greater pleasure than to introduce himself by declaring, “I represent the United States of America.”

Orr was awarded a scholarship to the University of Tokyo in 1983. His doctoral thesis, “The Emergence of Japan’s Foreign Aid Power,” was subsequently published by the Columbia University Press, winning the Ohira Prize for best book on the Asia-Pacific region.

He served as professor of political science at Temple University Japan, where he became the first director of the Center for Asian and Pacific Studies, and later was director of the Kyoto Center for Japanese Studies at the Stanford Japan Center in Kyoto. Orr then joined the telecommunications company Motorola, where he was credited with helping to open up Japan’s cellphone market.

Orr is probably best remembered at Motorola for the cellphones he delivered to ravaged neighborhoods after the Kobe Earthquake in January 1995, when he and several young colleagues stuffed backpacks full of small Motorola pocket phones and handed them to displaced people in the area over several days, sleeping on the floor of a central government building each night.

“The people of Kobe couldn’t believe his generosity. Some said it reminded them of the early Occupation era, when Americans distributed food to the Japanese people who were starving,” said Orr’s wife, Miko. “What made it all the more impressive was the Japanese government had blocked the sale of foreign cellphones in Tokyo and Osaka areas, and they imposed ridiculous demands such as a special stamp on each product before they would allow all the phones to be delivered — demands which my husband was, fortunately, able to meet.”

Very active in Democratic politics, Orr raised funds for many presidential and congressional candidates, and campaigned door to door and made numerous surrogate speeches on behalf of Barack Obama in his native Florida. Orr was a huge fan of Obama and collected numerous donations for him in Japan, France and the U.S.

Appointed ambassador to the Asian Development Bank by President Obama, Orr took up his posting in Manila, where he learned that Obama’s mother, Ann Dunham, had spent time in Indonesia working for the ADB. Assembling a collection of her writings, he presented them to a deeply moved Obama during a private meeting at a downtown hotel in Manila in 2014.

One of the most patriotic people you’d ever want to meet, Orr so loved the American flag that he would tear up at the playing of “The Star-Spangled Banner.” As ambassador, nothing gave Orr greater pleasure than to introduce himself by declaring, “I represent the United States of America.”

Fluent in Japanese and German — he had spent a year in Germany as a teenager and was an interpreter at the Munich Olympics during the hostage crisis — Orr was also conversant in French, with he and Miko often holidaying in France with their two golden retrievers, Fuco and Marina.

A hardcore New York Yankees fan, Orr’s fascination with baseball led to my first encounter with him, at a speaking engagement at the Kyoto Center for my book “You Gotta Have Wa.”

One of his life’s greatest memories, he liked to say, was working on his high school newspaper in West Palm Beach. In 1971, he became the only high school reporter in the entire United States to interview Johnny Unitas, quarterback of the Baltimore Colts, winner of the Super Bowl played at the Orange Bowl in Miami that year.

If someone asked him where he went to school, he would not mention Tokyo University or Georgetown but proudly declare that he was an alumnus of Florida Atlantic University, where he earned his undergraduate degree. Upon his retirement from the ADB on Dec. 31, 2015, he returned to his Kamakura residence and started guest lecturing at FAU.

He had deep, long-lasting relationships with two U.S. ambassadors to Japan: Tom Foley and Walter Mondale, He attended Mondale’s 90th birthday party in Minnesota in 2018 and spoke to him by phone this April shortly before his death. Four months later, Orr died of heart failure.

Orr is survived by his wife and his younger brother Alex, who is a meteorologist with the U.S. National Oceanic and Atmospheric Administration in Portland, Oregon.

Robert Whiting is a Tokyo-based journalist and author of books including “You Gotta Have Wa,” and “Tokyo Underworld.” His memoir “Tokyo Junkie: 60 Years of Bright Lights and Back Alleys … and Baseball” was published this year.

Hundreds of health centres at risk of closure in Afghanistan: WHO