Review: Shangri-La The Shard, London offers a luxurious escape into the clouds

It’s an unbelievably sunny day in London and the streets are crammed full with people — both locals and tourists. You look into the distance, and amidst the sea of impeccably preserved bricked buildings that flank the city’s cobbled roads rise a sleek pyramid of glass. That 72-storey wonder is The Shard, and in it lies the highest hotel that London has to offer, Shangri-La.

London isn’t short of luxury accommodation— in fact, the city does Grand Dame hotels perhaps better than any other great capital. But while we’re all for immersing ourselves in heritage and pomp — this is, Britain, after all — we’d never say no to sky-high views, especially when the opportunity is so rare. 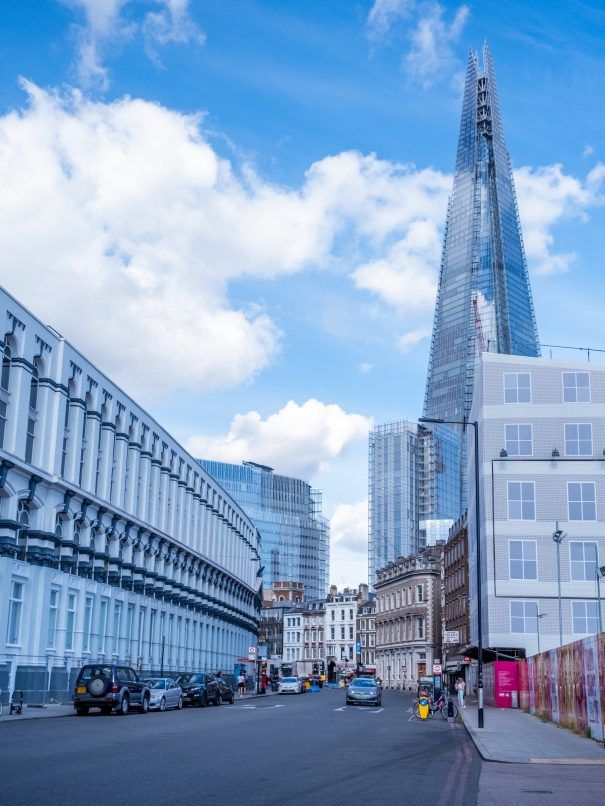 As the tallest building in London at 309.6m high, The Shard (or officially, London Bridge Tower) is inarguably one of the best and rarest places for a panoramic vista of the metropolitan city. Designed by famed architect Renzo Piano — who also dreamt up the famous Pompidou Centre in Paris — the skyscraper is a mixed-use structure that includes restaurants, residential apartments, an observatory, and of course, Shangri-La’s first UK outpost.

To find out if the hotel is worth the hype (and price tag), we spent a night at the five-star establishment. Here’s what we thought.

You might be in London, but the Shangri-La at The Shard is still very much steeped in its Asian roots, from the decor to its service. After all, the hotel group was founded in Singapore, and is currently based in Hong Kong.

As the tallest hotel in London, it doesn’t need to try hard to make an impression. Sweeping views of the city can be seen at every turn in what is essentially a glass house, and we’d be remiss to not talk about the sunrise and sunsets that you’ll be experiencing throughout your stay here, because they are quite unforgettable.

Opulence is the name of the game when it comes to interior design here, so don’t expect whimsicality or quirky here. It’s not like you’ll notice anyway with views like these. When you do peel your eyes away from the windows though, the interiors — from the lobby and restaurants to rooms — are swathed in soothing shades of greys, blues, beige, and the occasional touch of purple, creating a luxurious but calming environment to be in. 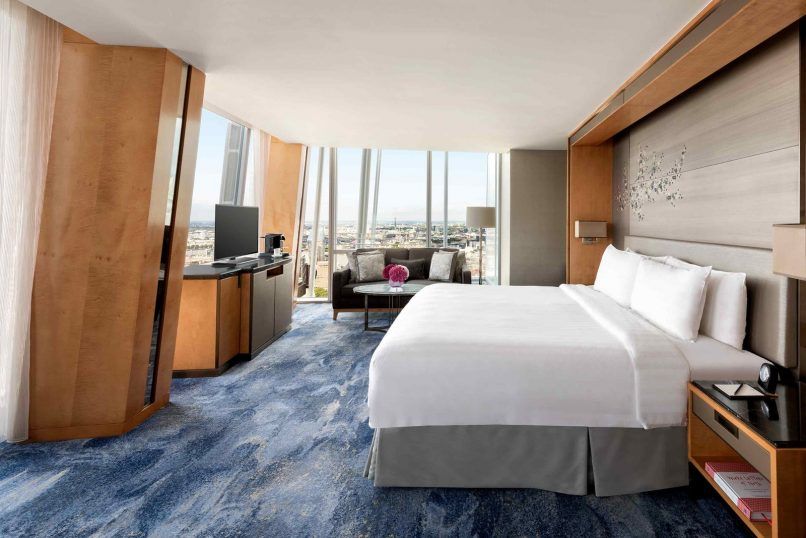 The same colour palette and Asian sensibilities can be found in the rooms here, and they range from the cherry blossom embossed walls to the fully automated Toto toilets. All 202 rooms here have a view with floor to ceiling windows, and the tranquil colours here are met with wood and marble accents, which take over everything from the counter tops and pillars in the room, to the finishings to the bathroom.

Regardless of which room you choose, all of them generously sized by London’s standards. The Deluxe City View Room that we stayed in, in particular, spans 32 to 47 sqm, and is a welcomed sanctuary after a day out on the bustling streets below — and not just because you’re more than 40 floors away from it. 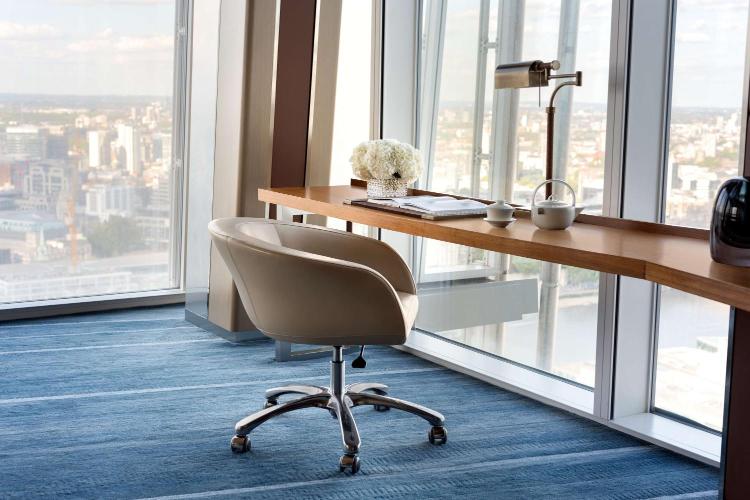 Each space is well-appointed to make your stay hassle free, with Nespresso coffee machines as well as porcelain Chinese tea sets for easy in-room lounging. The bathrooms have heated marble floors, a bathtub (by the window, of course), a walk-in rain shower, heated toilet seats, L’Occitane toiletries, and even a hidden TV inside the mirror, so you’ll never miss a second of your favourite show.

The bed is expansive and predictably plush, especially since it’s fitted with decadent 300-threadcount Frette bed linens that caress your aching body ever so gently. Got a pillow preference? There’s a pillow menu with hypoallergenic options too. For those working on the go, a full-sized executive writing desk by the window makes for the perfect work-from-‘home’ base, but no guarantees that you’ll get any work done because of — you guessed it — the views. Oh, and there’s a pair of binoculars for when you want to do some proper snooping. 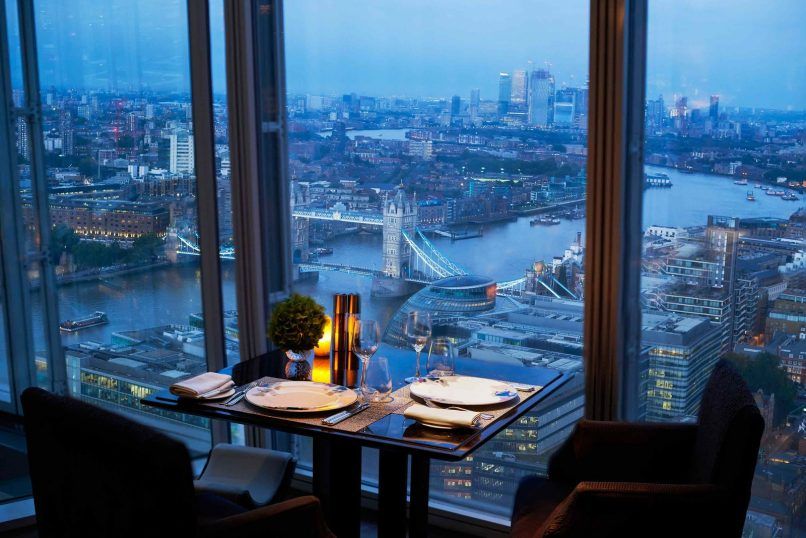 Shangri-La The Shard, London isn’t short of dining options, all of which are not only popular amongst its guests but also locals. Those who miss Asian food can head to TING, an Asian-centric restaurant with a British twist on the 35th floor of the The Shard.

Here, you’ll get the same dramatic views of London to go with your meal. The menu includes dishes that range from Malaysian Fried Rice and Singapore Curry Laksa, to Seared Japanese Wagyu Sirloin and Miso Cod. If you visit, don’t forget to order the Sweet & Sour Prawns, with lychee, pineapple, spring onions, and fried glass noodles. It’s a familiar take on the popular sweet and sour pork dish, only here you’ll get fresh, succulent prawns that have been kissed by the wok instead of the usual fried-to-death pork cubes.

On the other end of the spectrum are dishes like Cotswold Chicken and Spring Lamb, although they too incorporate Asian influences with ingredients like wasabi, Vietnamese tofu, and most surprisingly, lap cheong. At the end of the meal, a seemingly innocent tray with a pot of strawberry-infused Chinese tea is placed at the table, with the dry ice beneath sending dramatic wafts of smoke as a fitting end to this tremendous meal.

Service is just as impeccable here; the waiters and restaurant managers are extremely attentive, especially with food intolerances and preferences. Breakfast is also served here daily, as is afternoon tea, so you’ll get to see the same view in a different light as you tuck into fresh pastries, cakes, and mimosas.

Another equally stellar dining option here is GONG, a cocktail bar on the 52nd floor that’s perfect for sundowners and late-night tipples. 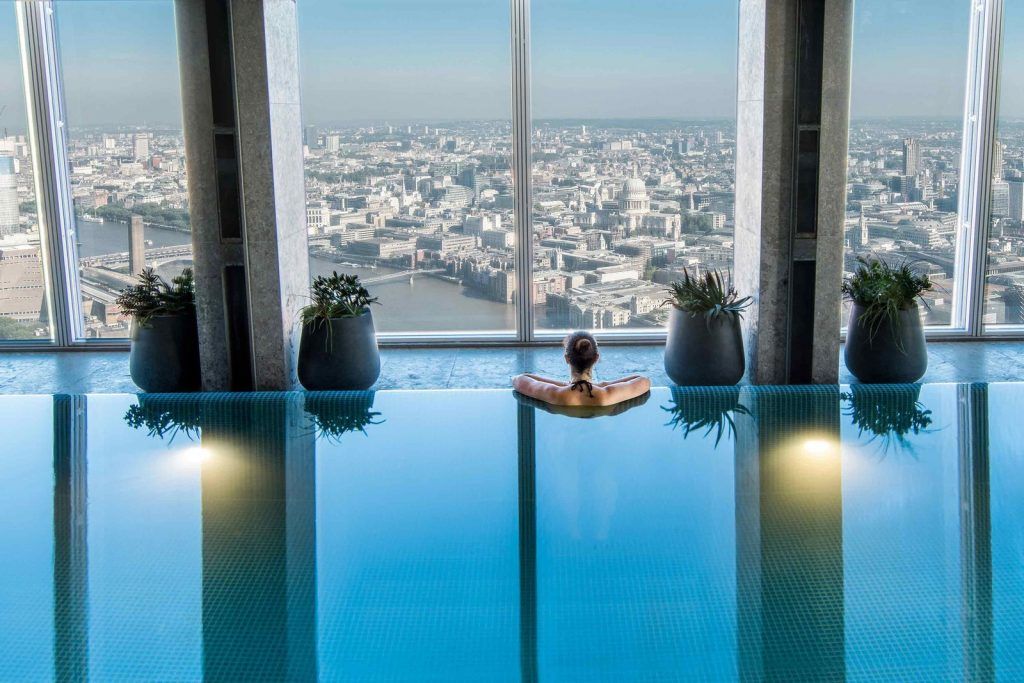 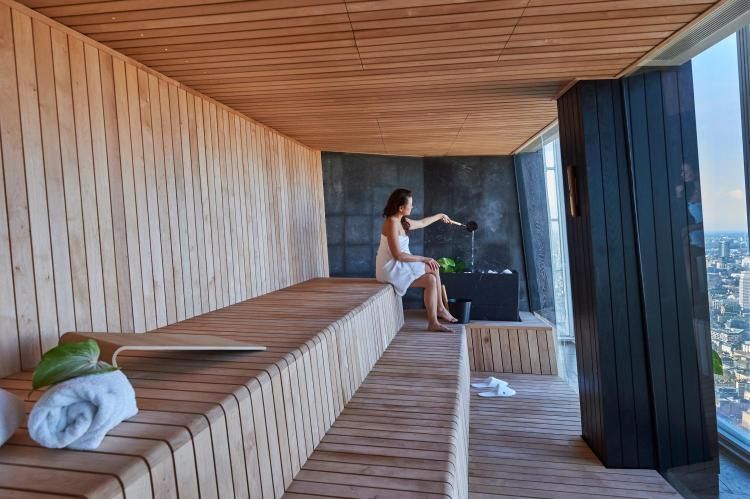 For some proper R&R, there’s a Sky Sauna on the 52nd floor that warms you up gently with views of the skyline, as well as the adjacent Skypool that can boast being the highest indoor swimming pool in western Europe. A well-equipped gym on the same floor also lets you sweat amongst the clouds. After that, pamper your mind and body at Shangri-La The Shard’s luxurious spa, which offers therapeutic and holistic treatments using Neal’s Yard Remedies products.

London is one of the most connected destinations in the world, but making Shangri-La at The Shard your temporary home will grant you even easier access to the rest of the city. London Bridge station is literally a mere 30-second ride down in the lift, while the Jubilee and Northern lines, National Rail Services, and National Rail services are but a short walk away.

These lines bring you to landmarks such as the Tate Modern, Buckingham Palace, and the Big Ben, as well as famous shopping spots like Bond Street. Fans of food markets will appreciate that one of London’s most famous, Borough Market, is only a two-minute walk away.

The architectural marvel takes modern luxury to a whole new level — and quite literally too.

London’s palpable energy is addictive, but when it comes time to wind down, one can find it hard to truly escape the bustle. Shangri-La The Shard, London offers a rare chance to physically — and mentally — remove yourself from the freneticism, whether it’s the constant sirens, traffic noise, and train track rumbles, or the excited crowds that throng below the busy station.

The rooms and restaurants showcase the hotel group’s penchant for stellar hospitality, but it is the views though, that truly puts this new property in the upper echelons as its competitors with historic legacy. You’ll never want to come back down after that. We know we didn’t.

(All images: Shangri-La The Shard, London)

The post Review: Shangri-La The Shard, London offers a luxurious escape into the clouds appeared first on Lifestyle Asia Singapore.

Where to eat, see, and stay in Ipoh, the other famous food capital of Malaysia