NEW YORK — American conservatives are piling criticism on the Biden administration for its handling of the withdrawal from Afghanistan and see an opening to present a new foreign policy agenda leading up to the 2022 midterm and 2024 presidential elections.

But there is little appetite for the grandiose, nation-building pushed by former President George W. Bush and the neoconservatives who dominated his administration. Neither are Republicans rallying around a neo-isolationist foreign policy, that would reduce American presence on the world stage.

Instead, they look to be searching for something in between. One camp calls for a return to a traditional Republican foreign policy, close to the policies of former President Ronald Reagan that called for “peace through strength.”

Another camp tilts toward the policies of former President Donald Trump, that is more inward-looking, puts “America First,” and limits foreign intervention to issues that clearly advance U.S. interests.

“There has been an ongoing debate within the Republican Party and the conservative movement over the war on terrorism, over America’s involvement overseas,” said Matthew Continetti, a senior fellow at the American Enterprise Institute. “The ‘freedom agenda’ of the administration of George W. Bush is no longer popular. The era of humanitarian intervention is long gone.”

But he added that between America’s two main political parties, the Republicans are still more nationalistic and more military-oriented, and the conservative foreign policy agenda going forward will be centered on those core elements. 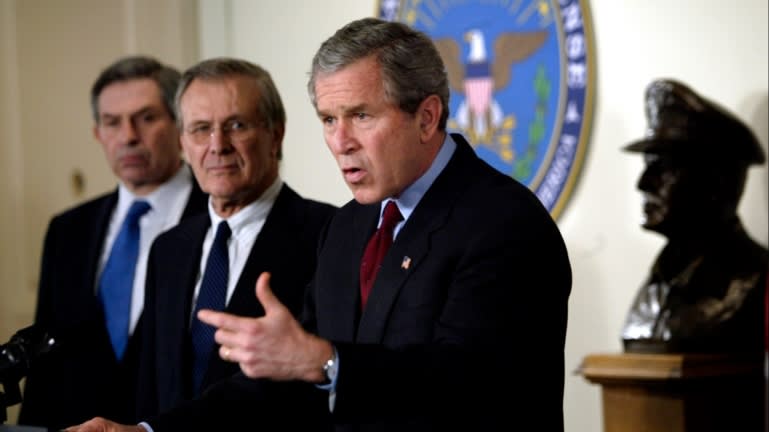 U.S. President Joe Biden “had half a point when he said that the reason we were in Afghanistan was to prevent terrorist attacks on our soil. Where Biden is wrong is thinking that somehow with us gone, Afghanistan won’t become a safe haven again. Of course it’s going to become a base for al-Qaida or ISIS,” Continetti said.

Leading Republican figures have been making the rounds on TV news shows criticizing Biden’s handling of the Afghan withdrawal, but their arguments have focused on tactics rather than tackling the root cause of Islamic radicalism.

“There are times where you have to negotiate with the devil, but you negotiate with the devil from a point of strength. You don’t do it from a point of weakness,” former U.N. ambassador and possible presidential hopeful Nikki Haley told CBS on Sunday. “The Biden administration needs to go back and extend that Aug. 31 deadline and make sure that the Taliban knows they’ve got to let people into the airport. We’ve got to get our Americans out. We’ve got to stay true to those Afghan allies that we made promises to. And we’ve got to make sure we do this in a very strong way going forward.”

Nile Gardiner, the director of the Margaret Thatcher Center for Freedom at the Heritage Foundation, said the Afghanistan withdrawal and the rift it has caused with NATO allies will have “a devastating impact on American standing in the world,” that may take decades to repair, comparing it with the retreat from Vietnam.

“It wasn’t until Ronald Reagan became president that America really got back on its feet,” the former adviser to Thatcher said.

How did Reagan regain American prominence?

“Reagan believed in American leadership. He had a very clear-eyed sense about American greatness, what it meant and the responsibilities that it carried,” he said.

“America is a much safer country when the United States has a powerful global leadership role. That’s the dominant view among U.S. conservatives. It doesn’t mean necessarily transforming the rest of the world in America’s image, but the alternative to U.S. leadership is the Chinese Communist Party holding sway over big chunks of the world from Africa through to even parts of the Middle East.” Former U.N. ambassador and presidential hopeful Nikki Haley has called on the Biden administration to extend Aug. 31 deadline and to confront the Taliban from a position of strength.   © Reuters

But some conservative opinion leaders subscribe to a more Trumpian, or a “Jacksonian” foreign policy that is more inward-looking and is skeptical of international institutions like the United Nations and the World Health Organization, but will defend U.S. national interests if the country were threatened.

Josh Hammer, an opinion editor for Newsweek and a fellow at The Burke Foundation, describes his position as “a national interest-centric, Jacksonian, prudential, America First foreign policy,” that secures American way of life.

He categorically rejects the neoconservative view of remaking the world in America’s image. “Even if nation-building and democracy exportation were sound ideas in theory, there is now overwhelming empirical evidence — namely, Iraq, Afghanistan, and perhaps even Egypt and Libya — that it simply does not work in a way that clearly redounds to U.S. national interests,” he said.

“In a new age of great-power competition with China, it is imperative that the U.S. focus on its core strategic and geopolitical threats. Feckless moralistic boondoggles undermine our deterrence posture vis-a-vis those core threats.”

“A far more prudent foreign policy would be to bolster core allies so as to better enable them to police their own neighborhoods, when possible. The Abraham Accords in the Middle East were a shining example of how this can work in practice. Most conservatives I interact with would no longer subscribe to the ‘Bush Doctrine,’ and I think that’s healthy.”

In a 2019 article for Foreign Policy, Michael Anton, former deputy assistant to the president for strategic communications on the National Security Council under Trump, wrote that the pillars of a “Trump Doctrine” were America First, a refusal to cede sovereign decision-making to transnational bodies like the World Trade Organization, and the rejection of globalism, which erodes borders and attempts to homogenize the world.

Heritage’s Gardiner predicted that foreign policy will loom large in the next 2024 election for both Republicans and Democrats. “There may not be an appetite among some voters for new conflicts, for new wars, but very few Americans like to be humiliated and the reputation of the United States dragged through the mud. Restoring America’s leadership in the world is going to be a big issue.”

Which path the conservatives embrace may have a direct impact on America’s allies and partners. Both Biden and Trumpian Republicans have identified “vital national interests” as the criteria for foreign engagements. 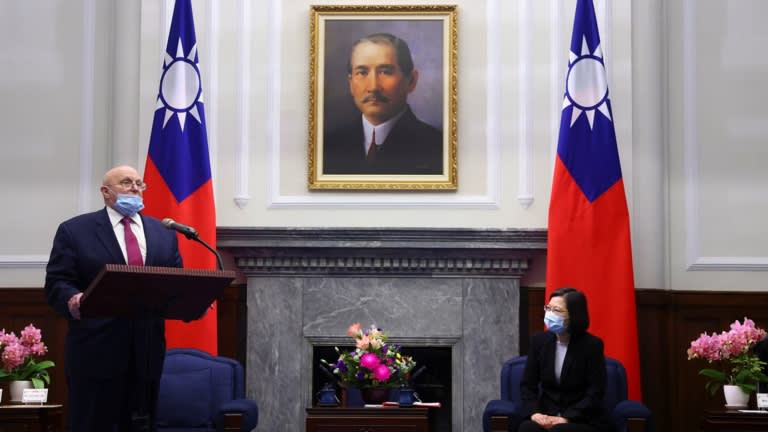 Is Taiwan a vital American national interest? Former U.S. Deputy Secretary of State Richard Armitage speaks at a meeting with Taiwan President Tsai Ing-wen at the presidential office in Taipei on April 15.    © Reuters

In Asia, whether defending Taiwan from a Chinese takeover is a “vital national interest” will be a major topic of interest.

Hammer said, “China is by far the U.S.’s number one strategic and geopolitical threat this century, and I think many conservatives also intuit that,” noting that they will see Taiwan as worth defending.

But he did add that “concerns about waning public support in the long run are perfectly reasonable.”

Ultimately the course of conservative foreign policy may be dictated by what happens on the ground. AEI’s Continetti predicts that the U.S. withdrawal from Afghanistan will be an “ideological propaganda boom for the global jihad movement,” and that the Central Asian nation will become a rallying point for the forces of terrorism.

“If this Taliban victory leads to a resurgence of Islamic terrorism, including within the United States, I think the voices of neo-isolationism will look foolish.”