Admiral James Stavridis was 16th Supreme Allied Commander of NATO and 12th Dean of the Fletcher School of Law and Diplomacy at Tufts University. He spent the bulk of his operational career in the Pacific, and is author of “2034: A Novel of the Next World War.”

For most of the 19th century, the Russian and British empires contended over Afghanistan in what was known as the Great Game.

The geopolitical competition recognized the strategic position of Afghanistan, and its potential to influence what is today Pakistan and India. Both the Brits and the Russians, of course, were defeated over time in Afghanistan, the so-called “graveyard of empires.”

Today, following the spectacular collapse of the American-trained Afghan army, the triumph of the Taliban, and the humiliating withdrawal under combat conditions of the remnants of the U.S. diplomatic mission, Afghanistan seemingly reverts to 2001 — run by hardline religious zealots determined to follow strict Sharia law. Will anything change, and a new Great Game emerging?

Perhaps. While I would guess that Taliban 2.0 will not be kinder or gentler to their own citizens, they have probably learned that allowing their nation to serve as a base for international terrorist operations can lead to twenty years in the wilderness — or in this case, the mountains of Pakistan. Likely they will be less interested in spreading jihad globally than in simply dominating the fractious Afghan nation.

That will not be easy. There are still regional warlords, especially in the north, who will not willingly bend a knee to the Taliban for long. Likewise, there are restive ethnic elements in the Afghan population — notably the Tajiks and Hazaras — who have no love for what they see as Pashtun fanatics from Kandahar. Afghanistan has a long and rich tradition of internal squabbling once an external foe is ejected.

All of which brings us to the role other major nations will play in Afghanistan now that the U.S. has folded its tents and flown away into the night. The sudden shock to the system regionally is palpable. Other Asian nations, including China, Russian, India, Pakistan and Iran, all have interests that will drive events going forward.

China is clearly positioning itself to be a major international partner to the Taliban. They could care less about human or gender rights in Afghanistan, and will only want to consolidate a dominant position in regard to the $1-2 trillion worth of rare earths — most notably lithium. As China seeks to consolidate as much control as they can over strategic supply chains for everything from microchips to electric car batteries, they want primacy in Kabul — and will be the first major nation to recognize the new regime.

For Pakistan, this is a moment of triumph. They have assiduously supported the Taliban for the past two decades, both to control terrorist groups that occasionally threaten Pakistan and to deny India a foothold in a country on the other side of their border. Closely aligned with China internationally, they will seek to partner with the Chinese in exploiting the mineral wealth and blocking India from a role with the Taliban regime. Pakistan also wants a certain level of stability to avoid mass illegal migration, something they have dealt with repeatedly from Afghanistan.

Russia has a different set of interests than the China-Pakistan axis. They seek first and foremost a stable situation that can reduce the propensity for radical Islamic terrorism exported north through the former republics of the old Soviet Union.

And while Putin is always happy to see the U.S. receive a black eye, the Russians are also hopeful that the Taliban can be encouraged to exert a higher level of control over the massive heroin production — much of which ends up in the arms of young Russians and other Europeans. Look for Russia to quickly recognize the Taliban, ignore any human or gender rights violations, and offer modest assistance in return for stability and at least some level of reduction in the narcotics trade. 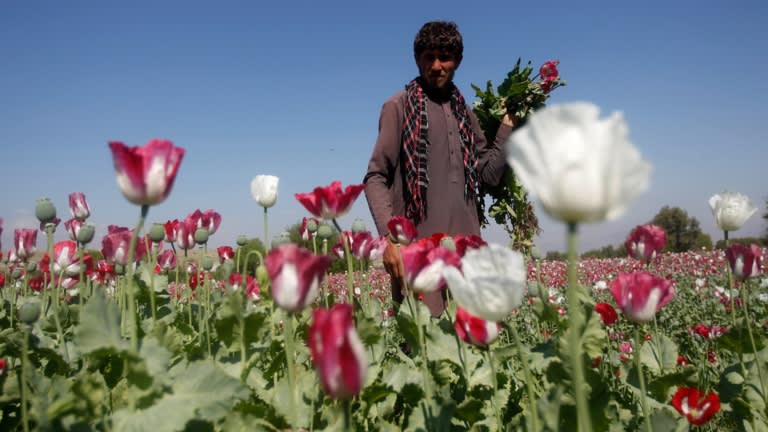 A poppy field in Jalalabad province, pictured in April 2014: the Russians are hopeful that the Taliban can be encouraged to exert a higher level of control over the massive heroin production.   © Reuters

To the west, Iran has had a fractious relationship with the Taliban in the past. The Taliban are Sunni and the Iranians, of course, are Shia. Overall, the Iranians are thrilled with the ejection of the U.S. from bases on their border and will place a premium on how the Pashtun Taliban treat the Tajiks, who are linguistically connected to the Iranians and constitute almost a third of the nation’s population. In the west around Herat and in the north surrounding Mazar-e-Sharif, the Iranians will strengthen commercial relationships and seek amicable relations with the new government.

Perhaps the most interesting role may be played by India. The Indians have long sought relationships in Afghanistan, both for the commercial potential of the nation and to put pressure on Pakistan. Some of the most virulent terrorist groups that have attacked India, including the infamous massacre at the Taj Hotel in 2008, emanated from Pakistan and demonstrate connections to terrorist groups operating on both sides of the Pakistan-Afghan border. China will do all it can, in concert with Pakistan, to foreclose any Indian influence in Kabul — which had grown significantly under Ashraf Ghani’s presidency.

Finally, while the U.S. has departed Afghanistan, it will seek to maintain intelligence overwatch through satellite surveillance; clandestine CIA operations; cooperating with other nations who continue to maintain embassies there; monitoring cyber and cellphone intelligence; and building human networks.

Particularly if there is evidence of reconnection between the Taliban and terrorist groups, notably al-Qaida, the U.S. will weigh if and how to reenter the Great Game. NATO and other U.S. allies will operate around the edge. But for the moment, the dominant forces in Afghanistan will be from the neighborhood — notably led by China. Thus the Great Game continues, but the players are all locals.