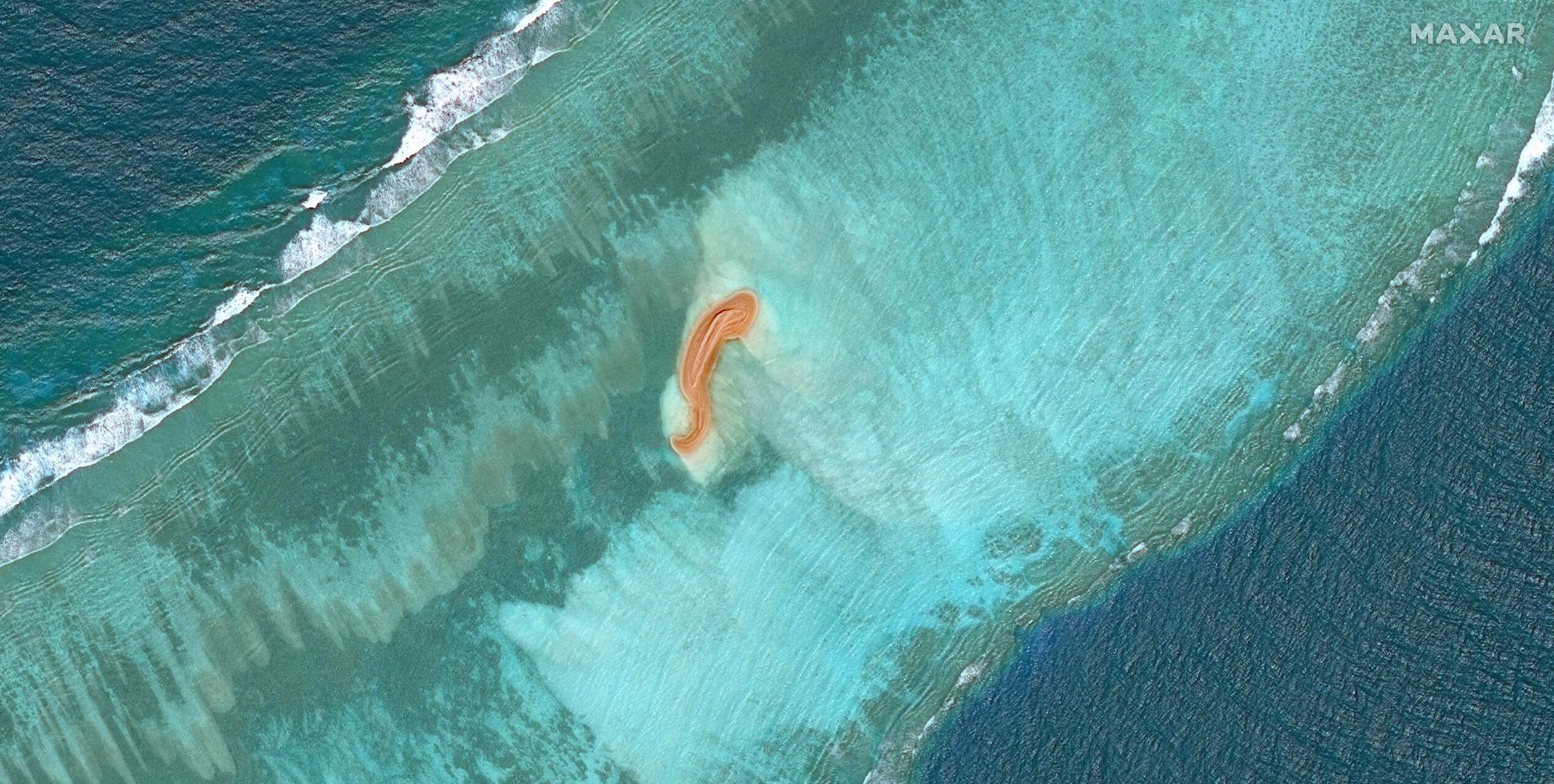 This handout satellite image taken on November 4, 2022 by Maxar Technologies shows a land formation (C) at Eldad Reef in the Spratly Islands, in the disputed South China Sea.

The Philippines said Wednesday it was “seriously concerned” over a report that China has started reclaiming several unoccupied land features in the disputed South China Sea.

Bloomberg reported Tuesday, citing satellite images from US officials, that new land formations have emerged around the contested Spratly Islands in the sea, where a Chinese vessel with a hydraulic excavator was seen operating over the years.

“We are seriously concerned as such activities contravene the Declaration of Conduct on the South China Sea’s undertaking on self-restraint and the 2016 Arbitral Award,” the Philippine foreign ministry said late Tuesday in response to the report.

The ministry added that other agencies have been asked to investigate the report, which the Chinese embassy in Manila branded as “fake news”.

Beijing claims almost all of the resource-rich waterway, through which trillions of dollars in trade passes annually. Other claimants include the Philippines, Vietnam, Malaysia, Brunei and Taiwan.

China has ignored a ruling from The Hague-based Permanent Court of Arbitration that its historical claim is without basis.

The ministry’s statement came just a week after Manila filed a diplomatic protest against Beijing after a Chinese coast guard vessel in November “forcefully” seized debris from the Chinese rocket that was retrieved by a Philippine navy vessel.

The Chinese embassy in Manila denied the use of force and said the handover took place after a “friendly consultation”.

Last week, the Philippine defence ministry also expressed “great concern” over the reported swarming of Chinese vessels in Iroquois Reef and Sabina Shoal, which Manila claims as its territory.

“(President Ferdinand Marcos’) directive to the department is clear — we will not give up a single square inch of Philippine territory,” acting defence secretary Jose Faustino said after the incident.

Marcos has insisted he will not let China trample on the Philippines’ maritime rights — in contrast to his predecessor Rodrigo Duterte who was reluctant to criticise the superpower.

The US State Department spokesman this week expressed support to the Philippines on both incidents and called on China to “respect international law”.

The Chinese embassy hit back on Tuesday, accusing Washington of using the dispute to “stir up troubles”. It acknowledged “differences” with Manila but did not address the alleged swarming incidents directly.

While other countries claiming the sea have also developed parts of the disputed waters, China has been the most aggressive — militarising islands with runways, ports, and radar systems.